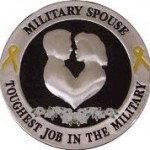 Last December I posted an article Military Divorces continue to increase, a  spokesman for the Veterans of Foreign Wars (VFW) said that,

“Every marriage has controllable and uncontrollable factors, but when you interject eight years of war, preparing for war, being at war, coming home and having to think about going back to war again, and when you have children, it just has a tremendous impact on the family unit.” However, the VFW also said that the military prides itself on taking care of military families.

As a retired military officer who served in two services the Army and Air Force, I can assure you that WE do take care of our own as long as our own stays in line, and does not make waves. However, what happens to military spouses once their uniformed husband or wife decides that that the Army, Navy, Air Force, or Marines is their real family during a war that our nation is not committed to?

Yes, we can say that before a man or women marries someone in uniform they must agree to the Soldier’s Creed, Airman’s Creed or whatever creed, even the one made up for Military Spouses to place ‘the mission’ above all else including family, but that does nothing for the spouse and children that the military member, and the Pentagon abandons.

Then it is time for those who really care about Military Families both those who stay and those forced or who chose to leave to step in and lend a hand.

As the comment from VFW shows, mainstream VSOs are not going to take up the cause of abandoned military spouses, especially when they favor protection of the military member over spouse or children who are abandoned by divorce.

PBS’ Favorite Unsung Heroine for 2009 abandoned for taking a STAND

I have managed to stay married and raise my family, and had no aspirations for promotion above Major knowing that making such a conscientious decision to place my family over the Air Force doomed me for promotion. I know first hand it is not an easy decision to make because the system and deck is stacked against you.

If you choose the Service over your family, then the deck is stacked against your family. The peer pressure to place mission above all else including one’s family  is even worse during wartime. However think about this.

Your spouse and family are ideally destined to spend the rest of their lives with you, the Army, Navy, Air Force, or Marines will spend only a portion of that time AND tell you when your services or no longer needed.

You will also be told you are no longer needed if you decide your family takes precedence over military mission(s). Especially missions that are ill defined and do not have the nation’s commitment nor shared sacrifice.

Rather than belittling or downplaying the spouses and children abandoned by the military that is suppose to take care of our own, we must do what we can to ensure a smooth transition to civilian life granted any military member. It is not right that when spouses and children are subject to divorce – no longer are they treated as our own within the Military community. Mostly because they couldn’t hack the endless deployments, can we really blame them for that. Who will cast the first stone for something the Pentagon admits is a problem?

How many of the other 99 percent of Americans refusing to serve or even consider marrying someone who is subject to endless deployments could put up with that. Maybe a few, and many – bless their hearts do – BY CHOICE.

When I get an email from an abandoned military spouse reminding me that,

“Army divorces have TRIPLED since 9/11. There is no assistance for military spouses in transition, no matter what the circumstances. I didn’t leave my husband. I supported him through two deployments and took him back after he left us three times. But the Army convinced him that the Army was his REAL family. I am not the only spouse seeing this happen. For those in the media and Congress getting this email, this is something to thing about from a public policy perspective.”

I for one have to not only show her compassion, but see what I can do within reason to help and encourage her, but quite frankly it takes combined public pressure on Congress, the Pentagon, and Pro-Peace advocates who seriously care about what happens to the 1 percent of families in America carrying this inequitable burden of war(s) most of us cannot relate to nor care about.

This champion of CHANGE who I’ve never met has been an active duty Army spouse for almost eight years and moved five times, including to Germany and back. Although she is a licensed attorney, frequent moves and marriage to an active duty Soldier have prevented her from practicing law.

This was an activist and advocate for Military Spouses, and because she wanted to bring CHANGE  to how military spouses are viewed and treated within the system, she paid the ultimate price of being abandoned by her husband, and the U.S. Army. 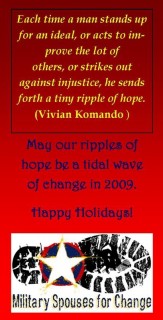 She created the advocacy group Military Spouses for Change, and she was an advocate for Wounded Warriors, and she tried to put together a Presidential Town Hall meeting at  Fort Hood, Texas BEFORE the massacre but was ignored except by the Army that retaliated by turning her husband against her.

What was her crime?

She advocated a visit to the base by the wrong candidate in a conservative world – now President Obama, even he, abandoned her.

However, what dawned on me as I read her message is that she was not only talking about or for herself despite how desperate she now looks for a job.

She was talking about every spouse enduring the growing number of divorces in our Armed Forces. With maybe ranging from one to five children, and various educations, backgrounds, and views ALL these women (and a few good men) have one thing in common – the deck is not stacked in their favor, the military system is against them, their spouses are turned against them, and even the groups that once advocated for them tend to have turned their back on them once they have served their political purpose.

These folks need a job preference program and assistance just as much as any Veteran in my eyes. Why?

Well first none of them get the transition to civilian life support that I got and every other military member will get or should demand.

This military wife, like far too many others, had to create opportunities for herself. It is not that she did not want to work for someone. It was that there wasn’t anyone to work for.

Despite being a licensed attorney in good standing with the bar in MD, having been named a national unsung heroine by PBS for women’s history month in 2009 , being an unpaid advocate for Wounded Warriors and Military Families, and an active duty spouse for nearly eight years, she has not been able to find a job despite her best efforts.

She has been applying for jobs since April of 2009, and now she, like many other spouses enduring military divorces, is desperate for help.

She is being forced into the streets with her  two sons (ages 6 and 9), because she has to  move out of her on-post housing by March 8. The Army is frankly within it’s rights to evict her by regulations.

She is willing to relocate ANYWHERE in the country and she is now open to any position even if she is overqualified.

Simply put, no military spouse rather they decide to permanently marry the military (place mission above all else) or not should have to send out such a desperate plea for help.

Frankly, I should not even have to be posting this, because this lady and thousands like her feel abandoned.

If anyone has any ideas how to approach the over issue of how military spouses once divorced are mistreated and abandoned, or can at least help this lady with job prospects, please contact me.

The only reason I’m doing this is because she has been a dedicated and passionate advocate for military families, for wounded warriors, and desiring only Peace so that her marriage could be saved.

She has paid the ultimate price and so will many other spouses, and I feel we are abandoning them for the stands they took.

If we do that, less and less military families will be willing to SPEAK OUT for FEAR of real retaliation from the Pentagon, the Army or whatever service that turns her spouse against her,  and feeling abandonment by everyone.