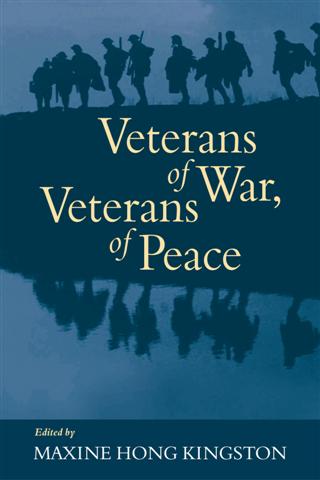 About two years ago my wife and I heard Pro-Peace activist Maxine Hong Kingston speak at Wright State University in Fairborn, Ohio right outside Wright-Patterson AFB.

Being a University right outside a major military base with close ties to the defense industry dollars for college level R&D, Wright State is not Berkeley by a long shot. She was a breath of fresh air in a sea of right of center of mostly neoconservative students and faculty.

Maxine is not a Veteran, not even a military spouse, but you would not know it to hear her speak or read her writings and what she has encouraged combat Veterans and military families to do. Find peace of mind in writing groups that verge on therapy and rap sessions for ‘families’ enduring and coping with PTSD since Viet Nam.

When she spoke of her book Veterans of War, Veterans of Peace, I had to get that book. Not because she was hacking it, but because I was curious. I was not to be surprised.

Tell the Truth, and So Make Peace

The book opens with the story not of a Veteran, but of the daughter of a Veteran-a child of the sixties growing up and dealing with both her own demons and her father’s reluctance to talk about the Viet Nam War. How she dealt with our society not wanting to talk about war and blamed the troops for being part of the war though many had not volunteered.

She describes as a child going with her mother to the Golden Gate bridge-a tradition of Navy families to meet and greet the homecoming of ships of war. Her dad was on the aircraft carrier U.S.S. Enterprise that just returned from bombing missions over North Viet Nam. She describes how scared she was as a six year old lost in a crowd of yelling anti-war protesters.

I have always held the view,  and still do, that not as many Viet Nam Vets were physically spit on as the myth implies, but when I read this little girl’s account, I for one could understand how she felt spit on the rest of her life for having a dad in the Navy during Viet Nam.

The stories run the gauntlet from Veterans representing the views of Stolen Valor, like this little girl who was not even a Veteran, to those of us embracing the views of Vietnam Veterans Against the War (VVAW), but rarely is ideology the theme or message of the poetry and writing only the stories of hurt and grief from those touched  most by the war, including the people of Viet Nam. Even the views of anti-war protesters are represented in a balanced negative and positive image. 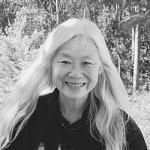 To understand why Maxine compiled this book, none of the stories her own, one needs to know her story. An American of Chinese ancestry, she writes, “All my life, I have wanted to keep Soldiers safe from war. During World War II, my cousins in uniform stayed at our house on their way to and from military bases in California , the Pacific, and Europe . I heard Veterans tell stories about the war that was killing and maiming right now as they spoke. Listening to people who had lived to tell the tale, I believed that it was the telling that kept them alive. They had survived hell and come back to warn us at home.”

There are those of course who prefer warriors not tell our stories especially today coming home from Iraq and Afghanistan, however she notes that, “As Odysseus, the archetypical warrior, made his way home, he narrated his journey—setting off to war, waging the long war, coming home—to listener after listener. The story grew until, finally home, he could tell the whole tale and become whole. We tell stories and we listen to stories in order to live. To stay conscious. To connect one with another. To understand consequences. To keep history. To rebuild civilization.”

It is in words that each individual reveals a unique mind Maxine reminds us. The Veterans of Viet Nam and Gulf War needed to write. “They would write the unspeakable. Writing, they keep track of their thinking; they leave a permanent record. Processing chaos through story and poem, the writer shapes and forms experience, and thereby, I believe, changes the past and remakes the existing world. The writer becomes a new person after every story, every poem; and if the art is very good, perhaps the reader is changed, too. Miraculous transforma­tions! People who care what we have to say surround us. They draw the stories out of us by their wanting to know.”

About twenty years after our war in Viet Nam —the Fall of Saigon , the Viet Nam War, the American War—the Vietnamese Buddhist monk Thich Nhat Hanh gathered war veterans and their family members in retreats for making peace. Not peace in the conventional meaning of the word as in world peace, but inner peace that is making peace with themselves regardless what their diverse political views on the war were and are.

With my Christian background and upbringing I’m still biased against the Buddhist precepts, teachings, and rituals that are combined with the writing sessions, but I am tolerant enough to get past that to what the writers have to say. I’m willing to LISTEN.

It is not so much what Maxine Hong Kingston or even Thich Nhat Hanh has to say to me that matters, I care about what others who have dealt with war and PTSD have to say.

I highly recommend this book to any Veteran or Military Family of any generation and any war for the inspiration that it gives. With the number of Veterans returning from Iraq and Afghanistan with PTSD or who will cope with it once denial departs, and in an America not committed to the wars nor wanting to talk about them, groups like this community of writers are going to be in high demand, and they do not have to be limited to Buddhist, Christian, Jewish, Muslim, Hindu or what have you but they do need to be spiritual to some degree. Just my opinion. 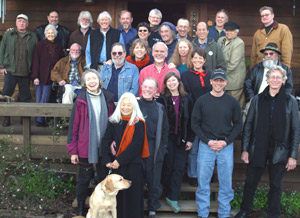 The contributors to this volume—combat veterans, medics, and others who served in war; gang members, drug users, and victims of domestic violence; draft resisters, deserters, and peace activists—are part of this community of writers working together to heal the trauma of war through art. Back on May 25, 2007, Bill Moyers Journal, featured Maxine Hong Kingston and Veterans of War, Veterans of Peace.

Reading their words, we witness worlds torn apart then rebuilt. This epic and timely work is the distilled wisdom of warriors and their loved ones, expressing themselves with breathtaking artistry and truth.