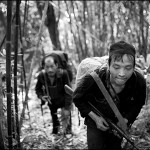 Abandonment of the Hmong by the US Continues

Why has the United States turned its back on some of the bravest and loyal people that stood by our side during the Vietnam War?  The so-called “Secret War”, which began during the early 1960’s, continues to remain secret in many ways – it is becoming more apparent to me, that the United States and especially the CIA has turned its back on The Hmong and they will face continued suppression at best, and possible genocide at worst.  How better to keep a “secret” than to ensure the people that might have knowledge of same, quietly disappear?

The CIA began to recruit and train the indigenous Hmong people in Laos to join the US in fighting the Vietnam War in the early 1960’s.  Over 50% of The Hmong men in Laos were supported by the CIA to join fighting the “Secret War”.  Their primary responsibility was to block the Ho Chi Minh Trail which was the main military supply route from the north to the south of Vietnam.  The Hmong put themselves in great danger but their loyalty to the US never wavered.  They were indeed heroes, saving many Allied forces from capture, imprisonment and death.  From 1967 – 1971, close to 4,000 Hmong soldiers were killed and over 5,000 injured and disabled.  Between 1962 – 1975, over 12,000 Hmong died fighting against the Pathet Lao – what many consider to be the Lao equivalent to The Viet Cong, and who eventually took control of Laos.  Following the US withdrawal from the region in 1975, we abandoned the Hmong.  They were left to escape their country of origin and most fled to Thailand where they have lived in UN refugee camps ever since.  Still others continue to evade capture as they continue to live in the jungles and mountains as they continue to be hunted and apprehended by the local governments. A few have been able to escape and migrate to western countries. 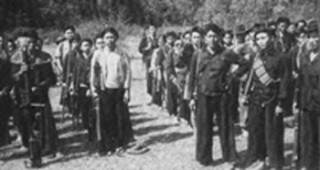 During December, 2009, Thailand forced over 4,700 Hmong refugees back to the regime in Laos.  Several hundred if not more, have been unaccounted for, and the worst is believed to be occurring – Hmong men have been beaten and have been subjected to food deprivation to ensure they sign confessions, presumably regarding their participation during the “Secret War” as well as to intimidate the other members of the Hmong and ensure they remain silent – about the war and certainly about the Lao Government and its officials.  With signed confessions in hand, the Lao officials are probably hoping that this week’s delegation of US and Thai officials, as well as by journalists, will go as planned – remain silent.  In fact, it has been reported that The Hmong who have been forcibly returned to Laos have had hundreds, if not more, removed from the “settlement camps” and scattered throughout Laos to remote prisons.  Keep them silent? How better to keep any information from them from reaching the masses then to remove them from any possible contact with non-Lao officials or journalists?  Perhaps to silence them permanently – which many fear has already begun.  Approximately 8,000 members of The Hmong who have been forcibly repatriated to Laos from 2007 -2009 are missing.  Many of these brave men, women and children attempted to petition the United Nations High Commissioner for Refugees at their Bangkok Headquarters for political asylum.  The result?  Forced back to Laos by the Thai Army against their wishes – but certainly favored by the Lao Government, and apparently the US, to keep the silence, silent.

During July, 2009, a US Delegation led by the principal deputy assistant secretary for the State Department’s Bureau of Population, Refugees and Migration, visited the Hmong in two refugee camps in Thailand.  Nothing was resolved, and to make matters worse, mixed signals were sent to The Hmong People – they had indeed been given the impression that they would be granted asylum and allowed to enter the United States.  What the Assistant Secretary did do, was to meet privately with Thai Military officers and a handful of The Hmong.   He never met with the thousands of Hmong that were in the camps.  Instead, upon his return to the US, he issued a press statement saying the US had no plans for a massive resettlement, but they would consider referrals on a case-by-case basis.  The US delegation demanded an appropriate and transparent screening process to identify those detainees who may have protection concerns.  “Those Lao Hmong who are found to be in need of protection should not be forcibly returned to Laos”, it said.  The repatriation plan could not be enforced easily since it runs against the Hmong’s freewill, notably those who claimed they are close associates of the CIA and fear suppression from the Lao government.  The Lao Military dismissed any such allegations and “guaranteed that no Hmong would be punished upon return to Laos”.

One interesting and alarming issue is this – it is estimated that several hundred of The Hmong who had close ties to the CIA are indeed in several of the many camps now, presumably back in Laos.  The entire Hmong population is being held, however.  Can the US not utilize its records and negotiate on behalf of those few hundred and have they as well as the entire Hmong people freed from Laos, refugee camps, or the jungles and mountains?  There are many who seek asylum in the US for a variety of reasons.  There are no other foreign people who deserve asylum in the US, or a western country of The Hmong’s choice, then the Hmong. In my opinion, The Hmong have indeed, more of a right, as a result of what they did to help their American allies during the Vietnam War.  Let us not forget, that Thailand also participated in the “Secret War”.

In 1993, Vue Mai, a former Hmong soldier who had been recruited by the U.S. Embassy in Bangkok to return to Laos as proof of the repatriation program’s success, disappeared in Vientiane. According to the U.S. Committee for Refugees, he was arrested by Lao security forces and was never seen again.  According to Amnesty International, at least nine Lao protest leaders have disappeared in Laos following their arrest in Vientiane on November 2, 2009.  “Guaranteed that no Hmong would be punished upon return to Laos”.  Interesting comment.  My definition of “guaranteed” is very different.

There are not only those Hmong who have been placed into refugee camps, or perhaps “re-education” camps by now.  There are in fact, many brave Hmong who continue to evade capture.  An investigative reporter met and spoke with several Hmong in the mountains.  The following quote, by a former CIA recruit is very telling.  “I am CIA. In 1970 Mr. Jerry gave me this M79 and told me to shoot enemy,” this Hmong fighter and former “secret war” recruit says in a perfect American accent, as he waves a battered grenade-launcher in the air.”We have lost thousands of troops for America – when the Laos soldiers kill us they feel like they have killed an America soldier. The CIA must come and save us.”  He continues “At least before, we thought we could escape to Thailand but now we have no place to run to,”  as he looks over to a mountain just three miles away. “We can’t keep running, soon we will all die here. Just over that mountain is where the enemy is and as we speak they are hunting us down with dogs – it’s just a matter of time before they attack us again.” 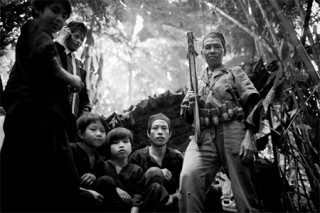 The CIA had the wherewithal and all the resources required, to recruit the Hmong for the “Secret War”.  Nearly 50 years later, they can certainly extract anyone they chose from any mountain top or jungle.  Not doing so for The Hmong, whether it be our CIA to perform extraction missions clandestinely, or the organized removal, with all Government’s involved approval, for those Hmong in refugee camps and elsewhere, by doing nothing is, a disgrace.  The US has clearly turned their backs on The Hmong who remain in Southeast Asia.  What “secrets” remain preventing the US and the UN from performing the necessary humanitarian work and free all Hmong from ongoing persecution? 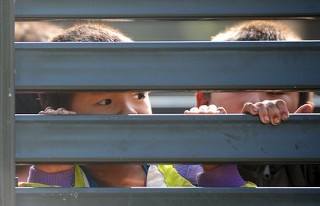