Obama reportedly snubbed Israeli PM, walked out on dinner after no deal on settlements 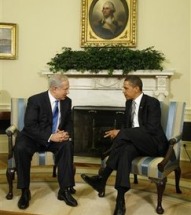 Israeli Prime Minister Benjamin Netanyahu returned home to media derision on Thursday, having failed to resolve a bitter row with Washington over the building of Jewish settlements. One publication even called it a diplomatic “hazing” by President Obama.

During the visit, the Israeli leader suffered perhaps the chilliest reception yet by an American president, as Barack Obama spoke to him only briefly and, learning that Netanyahu was unwilling to compromise on building new settlements in Palestine, abruptly left to dine by himself.

Netanyahu did not pose for any photographs and made no statement on arrival in Israel, but government spokesman Nir Hefetz insisted Israel and its closest ally had edged closer to an understanding.

“One Israeli newspaper called the meeting ‘a hazing in stages’, poisoned by such mistrust that the Israeli delegation eventually left rather than risk being eavesdropped on a White House phone line,” the Times Online reported. “Another said that the Prime Minister had received ‘the treatment reserved for the President of Equatorial Guinea’.