Home WarZone We Kill Our Own – The 40th Anniversary of the Kent State... 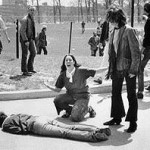 On May 4, 1970, at Kent State University, in the city of Kent, Ohio, members of the Ohio National Guard fired 67 rounds over a period of 13 seconds, killing four students and wounding nine others, one of whom suffered permanent paralysis.  These were unarmed college students who were exercising their constitutional rights to speak their mind, to demonstrate peacefully, and to protest openly against the then recent incursion by US combat forces into Cambodia.

Richard Nixon had been elected President in 1968.  He promised to end the Vietnam War.  Instead of doing so, he was part of the cover-up of the My Lai massacre and freed Lt. Calley, stating that Calley had “served enough time.”  The premeditated murder of over 500 unarmed civilians, many of whom were elderly, women and children was hushed up by our government – the murderer himself freed after serving only 1 day at the Ft. Leavenworth prison and transferred to serve house arrest upon orders given by Nixon.

On December 1st, 1969, the Selective Service of the US held a lottery to determine the order of draft into the Army for the Vietnam War.  This was the first draft lottery instituted since World War II.

On Thursday, April 30th, 1970, President Nixon announced the attack into Cambodia using the justification of “a necessary response to North Vietnamese aggression”.  A promise to end the Vietnam War?  A campaign promise that was yet another lie committed by this pathological lying and criminal US President.  Just one of many that eventually forced Nixon to resign, the only United States President to do so, after impeachment hearings had commenced in 1974.

On Friday, May 1st, 1970, a peaceful demonstration with about 500 students was held at Kent State.  The Cambodian Incursion, the draft lottery, the continued escalation of the Vietnam War – all issues being protested against.  The crowd dispersed at 1 PM to attend classes, but not until another rally was planned for May 4th. As peaceful, symbolic protests continued, one student burned a copy of the US Constitution.  Another burned his draft card.

During the evening of May 1st, 1970, trouble occurred around midnight as people left a bar and began throwing beer bottles at cars and broke downtown store fronts in Kent.  This crowd was made up of several outsiders and a handful of students – all of whom were indeed angered by the escalation of the war.  The police intervened and they restored order.

On Saturday, May 2nd, 1970, the Mayor of Kent declared a state of emergency and asked the Ohio Governor to send the National Guard to Kent to “help maintain order”.   The National Guard arrived in town that evening to find a fire had been started by an arsonist at an unoccupied and scheduled to be demolished building.  The National Guard made numerous arrests and used tear gas as a large demonstration occurred at the Kent State campus and near to that same building.

On Sunday, May 3rd, 1970, Ohio Governor Rhodes called the protestors un-American and referred to them as revolutionaries set on destroying higher education in Ohio. “They’re worse than the brown shirts and the communist element and also the night riders and the vigilantes,” Rhodes said. “They’re the worst type of people that we harbor in America. I think that we’re up against the strongest, well-trained, militant, revolutionary group that has ever assembled in America.” Rhodes can be heard in the recording of his speech yelling and pounding his fists on the desk. These were students exercising their right to protest and to be heard. Vigilantes?  More of the paranoia exhibited by our government and its leaders.

During the day some students came into downtown Kent to help with cleanup efforts after the rioting, which met with mixed reactions from local businessmen. Kent’s Mayor Satrom, under pressure from frightened citizens, ordered a curfew until further notice.

Around 8:00 p.m., another rally was held on the campus Commons. By 8:45 p.m. the Guardsmen used tear gas to disperse the crowd, and the students reassembled at the intersection of Lincoln and Main Streets, holding a sit-in in the hopes of gaining a meeting with Mayor Satrom and Kent State President White. At 11:00 p.m., the Guard announced that a curfew had gone into effect and began forcing the students back to their dorms. A few students were bayoneted by Guardsmen.

On Monday, May 4, a protest was scheduled to be held at noon, as had been planned three days earlier. University officials attempted to ban the gathering, handing out 12,000 leaflets stating that the event was canceled. Despite this, an estimated 2,000 people gathered on the university’s Commons, near Taylor Hall. The protest began with the ringing of the campus’s iron Victory Bell (which had historically been used to signal victories in football games) to mark the beginning of the rally, and the first protester began to speak.

Fearing that the situation might escalate into another violent protest, Companies A and C, 1/145th Infantry and Troop G of the 2/107th Armored Cavalry, Ohio Army National Guard (ARNG), the units on the campus grounds, attempted to disperse the students.

Just before noon, the Guard returned and again ordered the crowd to disperse. When most of the crowd refused, the Guard used tear gas. Because of wind, the tear gas had little effect in dispersing the crowd, and some protesters launched a volley of rocks toward the Guard’s line, too distant to have any effect, to chants of “Pigs off campus!” The students lobbed the tear gas canisters back at the National Guardsmen, who wore gas masks.

When it was obvious the crowd was not going to disperse, a group of 77 National Guard troops from A Company and Troop G, with bayonets fixed on their weapons, began to advance upon the hundreds of protesters. As the guardsmen advanced, the protesters retreated. The guardsmen pursued the protesters and the protesters showed signs of retreat, as they waited motionless for the end of the protest. Here they remained for about ten minutes. During this time, the bulk of the students congregated off to the left and front of the guardsmen. Others were scattered between Taylor Hall and the Prentice Hall parking lot, while still others – perhaps 35 or 40 – were standing in the parking lot, or dispersing through the lot as they had been previously ordered.

The guardsmen generally faced the parking lot which was about 100 yards away. At one point, some of the guardsmen knelt and aimed their weapons toward the parking lot, then stood up again. For a few moments, several guardsmen formed a loose huddle and appeared to be talking to one another. The guardsmen appeared to be unclear as to what to do next. They had cleared the protesters from the Commons area, and many students had left, but many stayed.  At the end of about ten minutes, the guardsmen began to retrace their steps back up the hill toward the Commons area.

At this point, at 12:24 p.m., a number of guardsmen at the top of the hill abruptly turned and fired their M1 Garand rifles at the students. In all, 29 of the 77 guardsmen claimed to have fired their weapons, using a final total of 67 bullets. The shooting was determined to have lasted only 13 seconds, although a New York Times reporter stated that “it appeared to go on, as a solid volley, for perhaps a full minute or a little longer.” The question of why the shots were fired remains widely debated.

Many guardsmen later testified that they were in fear for their lives, which was questioned partly because of the distance between them and the students killed or wounded. Time magazine later concluded that “triggers were not pulled accidentally at Kent State”. The President’s Commission on Campus Unrest avoided probing the question regarding why the shootings happened. Instead, it harshly criticized both the protesters and the Guardsmen, but it concluded that “the indiscriminate firing of rifles into a crowd of students and the deaths that followed were unnecessary, unwarranted, and inexcusable.”

The shootings killed four students and wounded nine. Two of the four students killed, Allison Krause and Jeffrey Miller, had participated in the protest, and the other two, Sandra Scheuer and William Knox Schroeder, had been walking from one class to the next at the time of their deaths. Schroeder was also a member of the campus ROTC chapter. Of those wounded, none was closer than 71 feet to the guardsmen. Of those killed, the nearest (Miller) was 265 feet away, and their average distance from the guardsmen was 345 feet.

This week, we continue to seek the truth of exactly what happened at Kent State.  Noted filmmaker and activist, Michael Moore will be broadcasting live, via his website, the Kent State Truth Tribunal which started yesterday in Kent, Ohio.

Another very sad chapter in American History.  No matter what the tribunal uncovers, absolutely nothing will bring back the students who were killed.  America and its National Guard murdered innocent students that day in 1970.  American citizens who were merely exercising their constitutional rights to express their concerns regarding our involvement and escalation of the Vietnam War.