It’s ludicrous that in a matter of weeks Mr. Karzai has gone from being a frail, faltering, unqualified leader hampered by a deceitful family, to the man who will magically bring together the disparate welfare of Afghans with his commendable leadership. 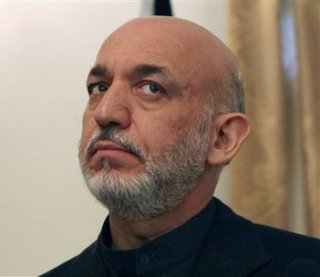 The boosting of President Hamid Karzai’s credibility that now paints him as a true national leader not only shows the West’s insincerity in Afghanistan but exposes the futile inconsistencies in efforts by the United States to accomplish its goals; especially regarding the recent Loya Jirga and the upcoming Kandahar operation.

One of the few critical bargaining chips left to Mr. Karzai, that he had to bring to the table in an effort to reconcile the disenchanted Taliban, was the recent professed peace Jirga convened in Kabul.

In his opening statement Karzai said, “Make peace with me and there will be no need for foreigners here. As long as you are not talking to us, not making peace with us, we will not let the foreigners leave.” But the opposition answered him with their own message of rocket attacks and violence that disrupted the Jirga assembly for over 45 minutes; and the fact that he later had to oust two of his trusted security personnel for security breaches, as a result, only accentuated this sure sign of failure.

As Jawaharlal Nehru said, “Failure comes only when we forget our ideals, objectives and principles.”

There is no doubt that Afghanistan is the land of Jirgas; and for centuries Afghans have used Jirgas to resolve differences amongst each other, no matter what outcomes resulted. But markedly, the ancestral Afghans convened Jirgas per their own discretion that was free of foreign interference and demands.

The aforesaid Jirgas many decades ago were all an indigenous mindset of ideals, objectives and principles; but the recent one, failed at its outset core mindset foundation. Ironically, these most recent Afghan Jirgas have become submissive, less spirited, and above all biased where the participants are handpicked for their positive assertions in favor of puppet governments. And since the outcome is already declared positive by the majority of participants ahead of the meeting, it is fair to say that this customary tribal council is now being abused to confirm pre-planned outcomes because of its grassroots footing.

In our indigenous view, the simple outcome to that notion is; it will not work in the long run!

The Russian puppet communist regime in Kabul headed by Dr. Najibullah had a relatively better understanding of Afghans. He convened the Loya Jirga three months after Soviet withdrawal, on May 20, 1989. The planned idea was to sell a similar reconciliation initiative to the Afghans by painting the notion that the foreign forces were already out of Afghanistan. But it was also marred with violence and disrupted for several hours, and it evidently failed in its core concept.

There is a misconception, by the fact that too many in the West think that the recent consultative Loya Jirga was entirely an Afghan-led process, and the West never participated in its course of action. It is a bewildering fact, and equally an, Afghan mindset that suggests that the presence of foreign forces deeply tarnishes the trustworthiness of the Jirga.

In hindsight, Mr. Karzai’s bargaining chip for the Loya Jirga was a waste of time for not convening in a normal tribal structure with true participation from the people; and more importantly, because the central government has foreign allegiance and lacks indigenous norms.

The next bargaining chip for Mr. Karzai is to prove his effectiveness in concert with the NATO alliance in Kandahar where the rumored view is a go-for-broke move.

But the results in Marjah associated with the failed “government in the box”, profoundly reflects the probable outcome in Kandahar. If the current measure for victory in Marjah is allowing Taliban rule at night and government rule during the day, then I would consider that a hollow and disastrous one. Thus, by these standards, believing the Kandahar operation with a much bigger populace will also fail is only par for this course of action.

Moreover, General Stanley McChrystal in a statement said, “This is a bleeding ulcer right now.”

The progress in Marjah has been slow, however, in part because no one who planned the operation realized how hard it would be to convince residents that they could trust representatives of an Afghan government that would send in corrupt police and inept leaders who would cause people to turn to the Taliban.

Another factor of Karzai’s bargaining chip in Kandahar is the issue of his half brother Ahamad Wali Karzai, who drastically exerts his family’s power over the entire Kandahar tribal makeup and is viewed as a hindrance to any operations in Kandahar.

General Stanley McChrystal’s team once talked openly about the need to remove him from power but that idea is now in reversal mode; for now Wali Karzai will stay and continue en route to his manipulative achievements.

For the past nine years, American governments have been naïve and confused in their big business with Karzai. During this time, the Afghan president has never considered good governance to be a serious issue –why should he suddenly be expected to do so now? The lack of trust between Karzai and America is in ascension, and if his bargaining chips cannot bring achievements, then what is next for Mr. Karzai? Or will he be given more chips to play with?

Here are a few chips that I would like to lay on the table:

Mr. Karzai, what Afghanistan needs today is a leader in the image of America’s George Washington, and South Africa’s Nelson Mandela. Here are two leaders who could have ruled for as long as they wished, but both men chose to be leaders rather than rulers. Neither sought personal power, and neither was corrupted by the power of their office. Both men taught their nation and the world about the responsibility of leadership after a great struggle by teaching others by example. By knowing when and how to properly let go of power, both leaders became beloved treasures who set the cornerstones for national leadership behavior for future generations. They both taught fighting men how to heal their nation’s wounds.

What can you do Mr. Karzai? You can call for a real Afghan government that the entire nation can accept: a Constitutional Monarchy, headed by a descendant of the former royal Head of State. You could call a real Loya-Jirga for the purpose of choosing candidates for the crowning of a new 21st Century royal Afghan Head of State; a new Constitutional Monarch; a new Afghan King.

The nation would then have to change the existing constitution from the current Presidential System to something like a parliamentary system with a prime minister, or go back to the old constitution that predates the Soviet Invasion of 1979.

I also would start to sing your praises, and would call for a new city to be built and named in your honor.