What some Afghan natives and analysts call the most dangerous part of the world has reached a critical juncture, “a tipping point”. Per Guardian and New York Times reports, “President Hamid Karzai has lost faith in the US strategy in Afghanistan and is increasingly looking to Pakistan to end the insurgency.” 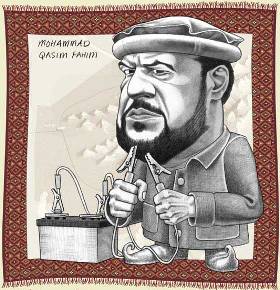 Rest assured that this is wishful thinking on Mr. Karzai’s part; it is a pipedream. Pakistan may not even want to waste their time to contemplate. In fact, the window of opportunity has long gone when Mr. Karzai’s intimacy with Pakistan’s arch rival India, who allegedly supported the Northern Alliance for many years in Afghanistan, is still considered a threat in the minds of some top Pakistani government officials. In hindsight, Karzai’s own instability and insanity is now considered the greater threat.

However, the most recent event in Kabul was the beginning of a panic mode within the Karzai government’s inner circle when two—most admired by the West—of his confidants; the senior intelligence chief Mr. Amrullah Saleh and the head of the Afghan interior ministry Mr. Hanif Atmar were both sacked from their positions.

According to a New York Times report, Mr. Karzai’s motive for the firings was to allegedly comply with Pakistan’s demand to be rid Mr. Saleh (ethnically a Tajik and once a confidant to Ahmad Shah Masoud) who as a hardliner railed against Karzai’s desire for reconciliation efforts to bring the Taliban to the table. That said, according to a reliable source in Kabul, another Karzai inner circle official, Vice President and powerful warlord Marshal Qasim Fahim (also a Tajik and a hardliner) is anxiously showing his interest in securing his own foothold in these game changing times. The source said, “He could go for the kill by securing the president’s position … (for himself)… in these panicky times.” If such a scenario were to ever develop, then Afghanistan is highly likely to spiral once again into a chaotic civil war between North and South.

When Karzai announced Mr. Fahim as his vice-president in the last election, many in Kabul alleged Mr. Fahim was at the time involved in criminal activities, including kidnapping for ransom; as well as human rights abuses during Afghanistan’s decades of war.

By choosing Mr. Fahim—with the blood of many Afghans on his hands—as his Vice-president, Mr. Karzai stained his own credibility even further. It also showed a lack of sanity on the part of Karzai for putting himself and the whole nation into such a delicate and risky predicament.

In any case, the source further said, “there is no doubt that Mr. Karzai in an accidental circumstance or … (any other drastic outcome)… could lose his presidency and Mr. Fahim who is second in charge – …(and according to)… the Afghan constitution–has the legitimate right to assume the position of the Afghan president for himself.” He further said that if this ever were to happen, “We will see a blood bath between ethnic Pashtuns and Tajiks all over Afghanistan.”

Moreover, with the support of the well trained 60 percent ethnic Tajik majority dominating the Afghan National Army and Police, it is highly likely to give enough confidence to the former Northern Alliance leader for him to believe that he could withstand any offense by the Pashtuns from Southern and Eastern parts of the country.

It remains to be seen as to what the upcoming Afghan parliamentary elections and the international conference on Afghanistan in Kabul evolves into, but our native Afghan analysis suggest that a plan must be drafted for a viable alternative solution just in case panicking officials within the Karzai government should act in ways that would cause massive societal disruptions.

The difficulty here is the problem of even bringing up the delicate subject of a change of government in Afghanistan. But, the legitimacy of the Karzai government is questioned by major Afghan tribal leaders, by the general Afghan public, and by the opposition who have been labeled in the western world as the Taliban; all have a stake in this matter. And, there is an emerging consensus within the whole nation of Afghanistan that is calling for the return of a Head of State with limited political power who can represent all Afghans. There is a growing call for a descendant of the former king to be made Head of State; someone who would be above politics, a constitutional monarch, a new Afghan King who represents the nation and unites all Afghans around the world. Politics would be relegated to the Prime minister, his deputy ministers and a Parliament. The national police and army would be relegated to protecting the king, and each province would have its own police and Provincial Guard military force. The Provincial Guard would act like America’s National Guard who could be called forth by the King and his select league of tribal elders or the prime minister to protect the nation.

This process starts by communicating with all Afghan tribal leaders who would then choose a special group of elders, a select league. This select league of elders would convene a series of leadership conferences inside and outside of Afghanistan. They would first meet to choose royal candidates for the Afghan Head of State. They would then travel to several capitals within the region before traveling on to capitals in the western world; and finally they would visit the United Nations in New York City as special guests. During this process, elders will have time to assess what is needed in the individual that they will choose as Head of State when they return home, based upon their own experiences in the world that they discover outside of Afghanistan; and having the time to screen out any bad blood inside their group if necessary, while building up the spirit of unity among themselves.

By traveling the world before selecting their King, the select tribal elders would see for themselves what is needed in the leader they select. The goal is to create a true Afghan democracy based on Afghan consciousness and consensus, while bringing Afghanistan’s people into the 21st Century; and by recognizing today’s status of facts on the ground as well as yesterdays tribal governing traditions, a bridge between yesterday’s successes and 21st Century needs can be created and strengthened.

From this group a number of things can be accomplished, like having these leaders put forth the names of young people who they see as future leaders that can to be trained in the ideas of traditional Afghan values as well as 21st Century concepts that will benefit their nation for generations; always with great respect for the full integrity of Afghanistan’s need for unique multi-tribal balancing influences.