Snopes.com, officially known as the Urban Legends Reference Pages, has since its humble inception in 1995 come to be regarded as one of the most trusted debunkers of conspiracy theories on the internet.

Described by one of its many fans – it apparently has over 6 million visitors per month – as “the grand-daddy of all fact-checking sites,” Snopes is downright cavalier, however, in its attitude to facts surrounding Israel’s role in the 9/11 attacks.

In “Absent without Leave,” Snopes reproduces a September 17, 2001 report by Lebanon’s al-Manar satellite television station, which claimed that the Israelis (not “Jews”) “remained absent that day based on hints from the Israeli General Security apparatus, the Shabak.” The Al-Manar piece cited also refers to the five Israelis arrested hours after the attacks, after having been witnessed filming and celebrating as the Twin Towers collapsed.

Below the al-Manar article, Snopes has appended a shoddily written, anonymous, unsourced internet piece, in which the 4,000 Israelis have again been mysteriously transformed into 4,000 Jews. In contrast to the al-Manar report, this diatribe includes such absurd and provocative anti-Semitic statements as “the Jews knew and were prewarned” about 9/11.

Snopes makes no distinction between the two pieces, however, lumping them together as examples of what it calls the “plenty of anti-Semitic, anti-Zionist, and anti-Israeli groups eager to use the horrors of September 11 as fodder for propaganda to serve their own political ends.” Considering its tendentious conflation of legitimate criticism of Israel – and the exclusivist ideology on which it is based – with an irrational hatred of Jews, one doubts whether Snopes would level the same accusation against Benjamin Netanyahu and Ariel Sharon.

How could they not have known?

Asked on the night of September 11 what the attack meant for relations between the United States and Israel, Netanyahu replied, “It’s very good.” Then he quickly edited himself: “Well, not very good, but it will generate immediate sympathy.” Later that night in an appearance on Israeli TV, the then Israeli prime minister Sharon indicated how Tel Aviv intended to exploit that “sympathy,” when he “repeatedly placed Israel on the same ground as the United States, calling the assault an attack on ‘our common values’ and declaring, ‘I believe together we can defeat these forces of evil.’”

Instead of attempting to debunk the well-documented claims that at least some Israelis were forewarned about the 9/11 attacks, Snopes peremptorily dismisses them, claiming they “scarcely merit the dignity of a rebuttal.” Yet, Haaretz reported that two employees of Odigo, the Israeli-owned instant messaging service, “received messages two hours before the Twin Towers attack on September 11 predicting the attack would happen.”

Asked whether Israeli agents had advanced knowledge of the 9/11 attacks, Fox News reporter Carl Cameron quoted U.S. investigators who concluded, “How could they not have known?” And then there were those “dancing Israelis” who later claimed on an Israeli talk show that their “purpose was to document the event.”

Disregarding evidence of Israeli foreknowledge, Snopes asserts that “no miracles, human intervention, foreknowledge, coincidence, or vagaries of fate saved more than a few World Trade Center workers from meeting their deaths that day.”

One of the lucky few (not mentioned by Snopes) was Larry Silverstein, who signed a 99-year lease on the World Trade Center six weeks before 9/11, insuring it for $3.5 billion. 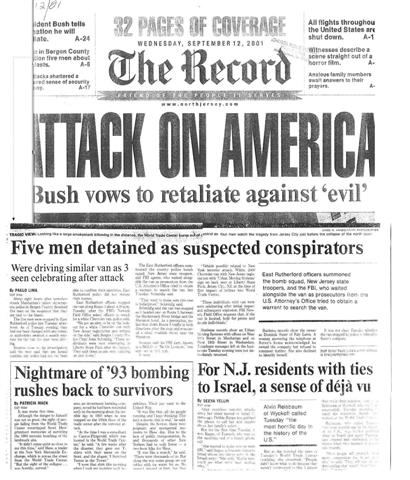 Silverstein’s wife’s insistence that he couldn’t cancel an appointment with his dermatologist that morning ensured that he missed his daily breakfast meeting with tenants at the Windows on the World restaurant on the top floors of the North Tower of the World Trade Center.

His son and daughter, who worked with him in the Twin Towers, were also fortunate to be “running late” on September 11.

Silverstein’s good fortune no doubt delighted his close friends in Israel. Soon after the attacks, the property developer received phone calls from no less than three Israeli prime ministers – Ehud Barak, Benjamin Netanyahu and Ariel Sharon – inquiring how he was.

Seemingly puzzled by suspicions that Israelis had advance warning of the World Trade Center attack, Snopes asks rhetorically: “Why would Israel follow such a course of action, betray its staunchest ally, and doom thousands of innocent Americans to death?”

One could also ask why Israeli agents planted firebombs in American installations in Egypt in 1954? Or why Israel murdered 34 U.S. servicemen in a deliberate attack on the USS Liberty on June 8, 1967? Or why Mossad decided not to warn the United States about the October 23, 1983 attack on its Marine barracks in Beirut which killed 241 troops? Or why Mossad’s Operation Trojan led Washington to believe that Libya was responsible for the April 5, 1986 Berlin disco bombing which killed two American soldiers?

To date, Snopes has yet to investigate any of these acts of betrayal by Israel of “its staunchest ally.”