UNAMA HR’s 2010 mid-year Report, “Protection of civilians in armed conflict” is an important milestone of the UN’s lofty endeavor in Afghanistan. Also, it’s deeply disturbing – due to what is claims, and what it doesn’t.

Devil’s advocate review questions UNAMA HR Report’s vision & veracity and offers specific recommendations to make it bite to the bone, rather than bark in the dark. 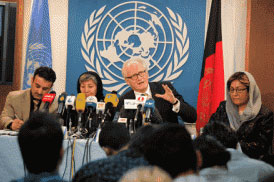 UNAMA’s mandate under UN Security Council Resolution 1017 stipulates, among other things, “to promote respect for international humanitarian and human rights law and the Afghan Constitution among all parties to the conflict”.

To equate & promote both – international law AND the Afghan Constitution – in omnibus package, is a commendable but quixotic ambition.

While the theory & practice of international jurisprudence are universally recognized & respected as a foundation for humankind’s unification – at least in the letter if not in spirit – the Afghan Constitution, as a bone of contention, is anything but.

In Afghanistan, the silent majority couldn’t care less about any law, ordinance or decree, including the Constitution, issued in Kabul. The militant minority vehemently opposes foreign values, influence and presence in any shape and form – be it centralized democracy, elections, occupation or Constitution – as a blasphemous challenge to Sharia Law and the tribal traditions.

There’s an emerging consensus in international experts’ community that the top-down Constitution, concocted by foreigners for Afghanistan on the spur of the moment, is a provocative mismatch to the bottom-up social fabric of the country, to be eventually discarded by the new Afghan leadership.

The bottom line: international legal system can’t salvage or “legalize” a discredited Constitution, but it could be perceived by the disenfranchised population as guilty by association.

As a UN entity, it is incumbent upon UNAMA to uphold international law. However, for the sake of national unity & reconciliation, it ought to forsake political correctness in favor of political impartiality and cultural sensitivity – namely, abrogating the promotion of the Afghan Constitution from its mandate as a symbol of external interference in the internal affairs of Afghanistan.