By Alistair Crooke  ( Campaign Against Sanctions and Military Intervention in Iran )

Our friend and colleague, Alastair Crooke, founder and director of the Beirut-based Conflicts Forum, has written the following post about Iranian President Mahmoud Ahmadinejad’s visit to Lebanon.  We heartily commend it to our readers’ attention. 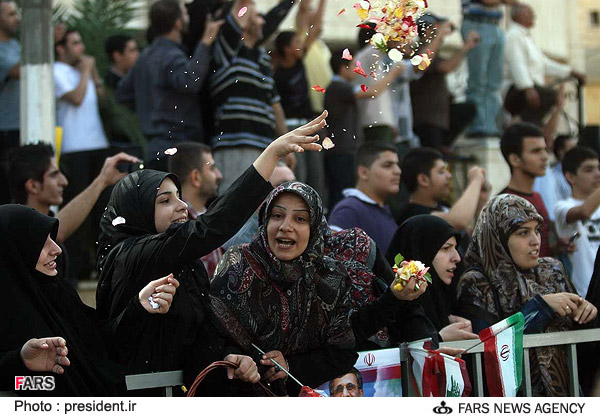 Firstly, let us put to one side the nonsense: The President of Iran’s visit was not about embedding Lebanon as a part of the Iranian state, nor was it about paving the way for any Hizbullah ‘take-over’ of Lebanon; and nor can the visit be described as a ‘provocation’. It was of course self-evidently intended to express defiance towards Israeli military hegemony and to assert a stand of counter-deterrence to any Israeli military threat, but that it is very different from an ‘act of provocation’ deliberately intended to draw an Israeli response.  All these claims for the purpose of the visit are just a part of the psychological warfare mounted against Iran, and can be ignored.

The visit was, in fact, a State visit. The Iranian President was formally invited by the Maronite Christian President of Lebanon some while ago. Iran is a prominent regional state, just as Turkey is – whose Prime Minister happens to be visiting Beirut today.

Iran’s popularity on the streets should not surprise anyone.  It is real, and it is heartfelt – and extends beyond the Shi’i of the south of Beirut.  Having been present here in Beirut throughout the war of 2006, I experienced the almost universal shock at how leaders and so-called ‘friends of Lebanon’ such as Tony Blair and Condoleezza Rice tried to fend-off and delay a ceasefire – in order to allow Israel more time to ‘finish the job’, i.e. to destroy more bridges, more infrastructure and impose civilian casualties – as our ‘price’ to be paid for Hizbullah’s seizure of Israeli soldiers. Feelings here are still raw on this point, and all sectors of opinion know that the only real support for Lebanon in those dark hours came from Syria and Iran.  Unsurprisingly, there was a direct element of gratitude in expression to Iran in recent days both for the support then, and its subsequent economic assistance to repair the damage.

But this does not constitute the deeper significance of the welcome extended to the representative of Iran in Lebanon – Lebanon, the bellweather of the wider politics of the Middle East.  It goes beyond a belated ‘thank-you’.

In May this year, Zbig Brezezinski gave a brief talk at the Council for Foreign Relations (CFR) in Montreal.  He told his audience that there were two factors shaping global politics in the world today. The first, he said was that “for the first time in all of human history, mankind is politically awakened and stirring”, adding that “all over the world people were aware of what was happening politically and are “consciously aware of global inequities, inequalities, lack of respect, and of exploitation”.

His second point was that the élites that rule us are less united and more diversified than before (he gave the transition of the G8 into the G20 as example); the élite is both less homogeneous and less restrained by adherence to traditional values and culture; the consequence of this is a more surveilled, and a more controlled society, Brzezinski has written.

On this latter point, Brzezinski is echoing the warnings of Michael Young’s (1958) ‘The Rise of the Meritocracy’ whereby a social revolution was shaping by ‘sieving people according to education’s narrow band of values’ and a new [élite] created, which – at least until recently – saw their position in society and their individual ‘lifestyles’ as validation of their ‘ability’ and ‘talent’; but who saw those who were excluded, merely as symptoms of others’ personal weakness, lacking and failure.

It scarcely needs adding that such a description is not confined to the élites of the West:  The ultra-rich, narcissitic and disdainful élites of the Middle East are as just as divorced from the rest of humanity, and just as exploitative and in love with themselves as any member of the Wall Street űberclass.

When Mahmoud Ahmadinejad or Hassan Nasrallah quote Imam Ali (the son-in-law of The Prophet)’s dictum that Muslims should be the ‘friend of the oppressed; and enemies of the oppressor’, or speak of western ‘double-standards’, New York Times sophisticates may sneer at this talk as ‘all hat and no cattle’; but they simply miss the point.

Simplistic to some, perhaps – Islamist movements and Iranian leaders do harp continuously on just those global inequities, inequalities, lack of respect and of exploitation to which Brzezinski attributes the unprecedented political ‘awakening’. The tables are turned: as the values of ‘the market’ and the secular liberal world order appear increasingly hollow to those who see in it only privilege, disparity of wealth and self-enriching self-interest, the language of resistance and defiance of western political and business élites, who style themselves as ‘the international community’ of course resonates deeply in a Middle East that is ‘awakening politically’ and ‘stirring’.

This, it should be understood, is the underlying dynamic to the shift in the strategic balance of the Middle East and to the emergence of an ‘resistance axis’ to that very that very élite dominated ‘world order’ and its systems of control imposed upon societies. The élites fear this awakening; and are determined to ensure its failure.

In short Islam – particularly Shi’i Islam – is taking over the clothes of the European early Renaissance (before the Enlightenment); Islam stands, for many Muslims, for a humanism and a respect for justice, human dignity and defiance of tyranny that Europe once espoused.  Of course, few in the West will see it in these terms: they have been too busy creating an inverted mirror image of what they perceive still to be western ‘virtues’ – and call it Iranian ‘theocracy’.

The significance of President Ahmadinejad’s visit was the popular articulation of this awakening, and the profound struggle ahead that it portends – more than just a signal of gratitude to an Iranian President.

Watch Weapons Inspector Scott Ritter’s analysis, although old, it is worth listening to again:

America is a state of mind