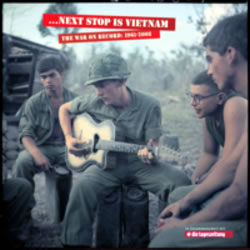 In summer 2010, Bear Family Records released “… Next Stop Is Vietnam: The War on Record, 1961–2008,” a 13 disc, 300+ song collection of music about the Vietnam War. Including songs from all genres and political viewpoints, this set is the definitive audio document of the Vietnam War. A review by ccmusic.com calls it, “An entire college course masquerading as a boxed set…that look[s] at the Vietnam conflict’s impact on American society.”

In honor of this landmark achievement, the Wisconsin Veterans Museum and other community partners will host a 3–day symposium November 18–20 to focus on the critical role that music played during the Vietnam era. All of the events are FREE and open to the public.

Distant Drums, Sky Pilots, and Green Berets: The Music of the Vietnam Era

For six decades, popular music has provided a unique perspective on the Vietnam War, its aftermath and its lasting legacies. With examples drawn from pop, folk, R&B, rock, soul, spoken word, comedy, reggae, rap, metal and more, Dr. Keesing will show that Vietnam has been the topic of every musical style of the past 50 years. In addition to several dozen well-known commercial hits by artists such as Bob Dylan, Creedence Clearwater Revival, Marvin Gaye and Bruce Springsteen, there are more than 3,000 recordings by lesser known singers that provide a new but essential understanding of the war. Many of those songs were recorded by “in-country” soldiers or Vietnam vets. Join musicologist Hugo Keesing for this special presentation featuring images and sound samples from Bear Family Records’ “…Next Stop Is Vietnam: The War on Record: 1961–2008.”

“I Believe I’m Gonna Make It”: A Conversation About Southern Music and the Vietnam War

The Vietnam War coincided with a particularly fertile time in Southern music, as recordings from country to soul to rock changed the national culture in significant ways. At the same time, Southern society grappled with significant changes in racial and class politics, changes that were often expressed through the music. The Vietnam War played a crucial part in, and contributed to, both the musical and societal changes. At this event, Charles Hughes and Bill C. Malone, along with moderator Jeff Kollath, will discuss these issues, and play selections from a variety of genres to illustrate the connections and complexities of the music, the people and the times.

“Does Anybody Know I’m Here?”: Black Music and the Black Experience in Vietnam

The culture of the Civil Rights and Black Power era played a critical role in shaping the black experience in Vietnam , increasing cultural awareness and arousing suspicion of America ’s motives in Vietnam . Music was a constant source of inspiration and escape for black soldiers during the war, from the soothing sounds of Motown to the hard driving funk of James Brown and Sly and the Family Stone, and all points in between. Join us for this special panel discussion, featuring musicians and grunts alike, all of whom have been shaped in some way by the Vietnam War, and how, after four decades, how their Vietnam experience continues to influence their lives and careers.

Soldier, Singer, and Guitar Slinger: Acoustic and Folk Music During the Vietnam Era

Hugo Keesing, Curator, “…Next Stop Is Vietnam : The War on Record”; Moderator

As much as popular music broadcasted over Armed Forces Radio, 45s played on the PX jukebox, and LPs and cassettes played in the field meant to those serving in Vietnam , the company’s resident guitar player was equally important. Acoustic renditions of popular songs, or their war-appropriate send-ups, provided welcome respite from the tragedy and banality of war. Join our panel as they discuss the popularity of acoustic music during the war, the performance of formal songs on base, and writing songs about the Vietnam experience.

“We Gotta Get Out of This Place”: Music and the Vietnam Experience

“We Gotta Get Out of This Place,” the forthcoming book by Bradley and Werner, tells the story of the Vietnam War through the music-based memories of those who served. Authors Doug Bradley, who was in the U.S. Army in Vietnam in 1970 and 1971, and Craig Werner, a prize-winning music writer and member of the Nominating Committee of the Rock and Roll Hall of Fame, weave a tapestry of voices set against the cacophony of the popular music of the 1960s and 1970s. From “Chain of Fools and “Fortunate Son” to “Purple Haze” and “We Gotta Get Out of This Place,” their work shows how soldiers used music to form bonds, express their feelings, and hold on to the humanity the world was trying to take away. Join us for this informal discussion of the music of the war, relive the weekend, and share your favorite songs and memories from the Vietnam Era.