The other day I looked back with sadness on how nothing had changed for the better since my last trip to Palestine three years ago. On that occasion I also visited Gaza, an experience indelibly etched on my memory.

The situation there only goes from bad to worse – intolerably worse. But if I’m dispirited, heaven knows how the average Palestinian must feel as a result of the incompetent leadership they have had to endure these last 63 years… a leadership which failed to coherently argue and convey the justice of the Palestinian cause and never bothered, even to this day, to formulate and put into action an effective communications plan to win freedom. 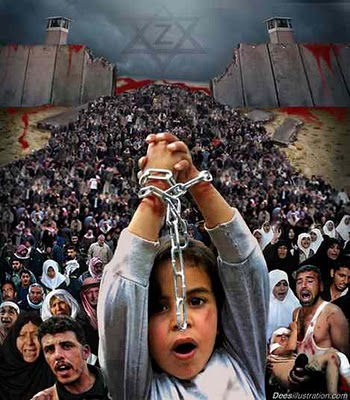 The Israelis, though accomplished propagandists, are not very bright. In the battle for hearts and minds they have a violent story to tell and a lousy reputation to defend. And it’s getting worse every day. In their greed they score potentially damaging own-goals and leave the moral high ground to their victims.

Their conduct reveal a cruel streak. They trample human rights and show no respect for international law. They are steeped in war crimes and crimes against humanity.

Yet the Palestinians shrug and let the endless flow of priceless PR opportunities slip away.

The Palestinian Authority, which is supposed to be leading the fight-back, has little to say to the outside world and the many sympathisers out there.  The task of informing and educating is left to a handful of exiles, academics, dedicated internet site operators, conscientious UN personnel like John Ging and Richard Falk, political mavericks like George Galloway, bold ‘freelancers’ like Ken O’Keefe, a host of courageous charities on the ground and rising numbers of students across the globe. Jewish peace activists play a vital role too.

All work hard to keep the issue alive, no thanks to the PA.

The front that Palestine presents to the world remains disunited, chaotic and dysfunctional, just the way Israel and the US like it. Fatah, with a history of sleaze and corruption, has taken on a role similar to that of the hated Milice in World War 2, the boot-licking paramilitary outfit set up by the Vichy French government, with Nazi help, to fight the French Resistance and do much of the Nazis’ dirty work. Parallels with what’s happening now in the Holy Land are unmistakable.

Fatah should remember that when the Nazis were beaten the French people took their revenge on surviving members of the Milice.

Hamas, defending its packed coastal enclave, meanwhile allows itself to be demonized and makes no move to overhaul its image – a puzzling omission and a blunder with huge self-inflicted consequences.

We are watching the sort of self-indulgent and ultimately self-destructive lunacy no-one in this day and age can afford, least of all the Palestinians. Who can blame sympathizers for throwing up their hands in exasperation, crying “Enough! A pox on you all,” and reaching for the ‘off’ switch?

If any real progress is to be made, things must now change drastically within Palestinian ranks.

My own finger was hovering over the ‘off’ switch when an excellent piece by Jeff Halper entitled “Palestine 2011”  dropped into my Inbox and made me sit up. When this remarkable man speaks I, for one, listen.

Will a jolt from the outside create “new circumstances for peace”?

For many years Jeff Halper and his organisation ICAHD (Israeli Campaign Against House Demolitions) have closely monitored the Israeli occupation and its sinister methods, sometimes courageously facing the bulldozers and re-building what they knock down. ICAHD’s analyses and other resource materials are essential reading for anyone wishing to properly understand the situation. If you visit ICAHD in Jerusalem, as I have done twice, you can arrange to be taken on a tour to see the awful truth.

“We are at a dead-end of a dead ‘process’,” says Halper, adding:

“Israel will never end its Occupation voluntarily; the best it may agree to is apartheid, but the permanent warehousing of the Palestinians is more what it has in mind.”

Given the massive ‘facts on the ground’ Israel has established in the Occupied Territories, Halper believes the international community will not exert enough pressure to make the two-state idea a reality. Even if they wanted to, the veto power enjoyed by Israel’s sponsor, the US, wouldn’t allow it. “And the Palestinians, fragmented and with weak leadership, have no clout. Indeed, they’re not even in the game….we have arrived at the end of the road.”

However, he predicts that 2011 will create a new set of circumstances in which a just peace is possible, but the necessary game-changing jolt must come from outside the present “process”.

He puts forward two possibilities. The first is a unilateral declaration of independence by the Palestinian Authority on the 1949 armistice lines (the 1967 “Green Line”) together with an application for UN membership. A Palestinian state within those pre-1967 borders, which UN member states, including the US, already recognise, would be accepted by most countries in the world. Such a move would place reluctant powers like the US, Britain and Germany in an awkward position and force the hand of the international community.

The trouble is, says Halper, “the leadership of the Palestinian Authority lacks the courage to undertake such a bold initiative”.

It’s more likely, he thinks, that 2011 will see a continuing deadlock in “negotiations” and the collapse of the Palestinian Authority, bringing to an end the current process. It would be unthinkable for Israel to allow Hamas to fill the vacuum, so it would be faced with the prospect of re-occupying the Territories at full security strength, a massive burden. Such a move would, of course, inflame the Muslim world and generate massive protests worldwide, again forcing the hand of the international community. “Looked at in this way,” Halper observes, “the Palestinians have one source of enormous clout: they are the gatekeepers.”

Jeff Halper throws some welcome shafts of sunlight onto a bleak landscape. But is civil society, in Palestine and abroad, in any shape to seize the opportunities presented by either of these scenarios? Activists, wherever they are, need to prepare for what happens and agree how to react if the Palestinian Authority falls.

“Abbas may be weak and pliable, but he is not a collaborator,” says Halper. Well, he certainly had me fooled. If it waddles like a collaborator, quacks like a collaborator and jumps through hoops like a collaborator, it sure as hell ain’t no patriot duck! Abbas might have created a better impression if he’d carried the fight to the Israelis and the US, demanded the enforcement of international law and UN resolutions, refused to negotiate before Israel complied, and insisted on any subsequent talks being supervised by the UN, not by Israel’s ally, financier, arms supplier and all-purpose bitch.

Far from upholding Palestinian rights, “honest broker” America torpedoes them at every turn even under this peace-prize president. It must be sidelined somehow.

To my mind the international community, with or without the US, could have used leverage to force an end to the occupation any time during the last 63 years, and could do so tomorrow. The great mystery – for many – is why the Palestinian Authority and the Arab community of nations have not explored that angle energetically enough.

It has always been vitally important to counter Israeli propaganda. Abbas should have set up a professional communications unit, trained and funded Palestinian embassies around the world to educate and inform, and orchestrated an effective worldwide campaign.

Why didn’t he? His ‘silent routine’ and reluctance to make waves lend weight to accusations of collaboration.  The only information coming out of the PA’s embassy in London, for example, is social ‘froth’ like details of the next concert. Its website hasn’t been updated for since April, which just about sums up the uselessness of Abbas and his henchmen.

Compare this with the slick, always-on-the-ball Israeli operation.

As for Hamas, they certainly have what it takes in terms of raw courage, firm resolve and popular support to fill the void, as they did in the 2006 elections. But they are unapproachable at a time when they need to open up, forge friendly links and defuse the West’s fears and misconceptions. Without a careful makeover and general re-branding they’ll have a hard road ahead and so will their people.

If 2011 doesn’t bring Jeff Halper’s “jolt from outside”, and a dose of salts to flush Palestine’s insides, the ‘off’ switch will remain a serious temptation.