When waging intelligence wars, timing is often the critical factor for game-theory war planners. The outcome of the WikiLeaks release suggests a psy-ops directed at the U.S.

“The United States is the real victim of WikiLeaks. It’s an action aimed at discrediting them.” Franco Frattini, Foreign Minister of Italy

The impact of the WikiLeaks release of diplomatic cables fits the behavior profile of those well versed in game theory warfare.

When Israeli mathematician Robert J. Aumann received the 2005 Nobel Prize in economic science for his work on game theory, he conceded, “the entire school of thought that we have developed here in Israel” has turned “Israel into the leading authority in this field.”

The candor of this Israeli-American offered a rare insight into an enclave long known for waging war from the shadows. Israel’s most notable success to date was “fixing” the intelligence that induced the U.S. to invade Iraq in pursuit of a geopolitical agenda long sought by Tel Aviv

When waging intelligence wars, timing is often the critical factor for game-theory war planners. The outcome of the WikiLeaks release suggests a psy-ops directed at the U.S.

Why now? Tel Aviv was feeling pressure to end its six-decade occupation of Palestine. With this release, its foot-dragging on the peace process was displaced with talk of an attack on Iran.

While the U.S. bore the brunt of the damage, the target was global public opinion. To maintain the plausibility of The Clash of Civilizations, a focus must be maintained on Iran as a credible Evil Doer.

With fast-emerging transparency, Israel and pro-Israelis have been identified as the source of the intelligence that took coalition forces to war in Iraq. Thus the need to shift attention off Tel Aviv.

WikiLeaks may yet succeed in that mission. 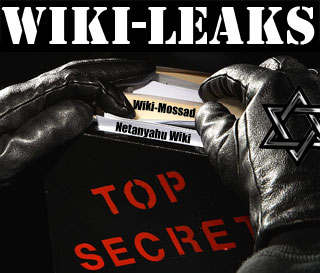 Game theory war planning aims to create outcomes that are predictable—within an acceptable range of probabilities. That’s why Israeli war planners focus on gaining traction for a plausible narrative and then advancing that storyline step by gradual step.

For the Zionist state to succeed with its expansionist agenda, Iran must remain at center stage as an essential villain in a geopolitical morality play pitting the West against Islamo Fascists.

To displace facts with false beliefs—as with belief in the intelligence that induced the invasion of Iraq—momentum must be maintained for the storyline. Lose the plot (The Clash) and peace might break out. And those deceived may identify the deceiver.

Thus the timing of this latest WikiLeaks release. Its goal: to have us believe that it is not Tel Aviv but Washington that is the forefront of geopolitical duplicity and a source of Evil Doing.

Intelligence wars rely on mathematical models to anticipate the response of those targeted. With game theory algorithms, reactions become foreseeable—within an acceptable range of probabilities.

Control enough of the variables and outcomes become a mathematical inevitability.

Was the reaction to this latest WikiLeaks foreseeable? With exquisite timing, the U.S. was discredited with an array of revelations that called into question U.S. motives and put in jeopardy U.S. relations worldwide.

As the Italian Foreign Minister summarized: “The news released by WikiLeaks will change diplomatic relations between countries.”

The hard-earned trust of the Pakistanis disappeared overnight. Attempts to engage Iran were set back. The overall effect advanced The Clash storyline. If Washington could so badly misread North Korean intentions, then why is the U.S. to be trusted when it comes to a nuclear Iran?

This Wiki-catalyzed storyline pushed Israel off the front page in favor of Iran.

Even U.S. detainees at Guantanamo are again at issue, reigniting that shameful spectacle as a provocation for extremism and terror. U.S. diplomats will now be suspected of spying and lying. What nation can now trust Americans to maintain confidences?

In short, the risks increased for everyone.

Should Israel launch an attack on Iran, Tel Aviv can cite WikiLeaks as its rationale. Though an attack would be calamitous from a human, economic and financial perspective, even that foreseeable outcome would be dwarfed by the enduring hatred that would ensue.

That too is foreseeable—from a game theory perspective of those marketing The Clash.

With the elimination of Sunni leader Saddam Hussein, the numerically dominant Shiites of Iraq were drawn into the political orbit of the Shiite-dominant Iran.

Game theorists focus their manipulation of affairs on their control of key variables. Then events take on a life all their own. The impact of this discrediting release was wide-ranging and fully foreseeable.

A Mossad case officer explained Israel’s success at waging war by way of deception: “Once the orchestra starts to play, we just hum along.”

These, after all, are the leading authorities in the field.