To whom should this release be attributed? Who benefitted? 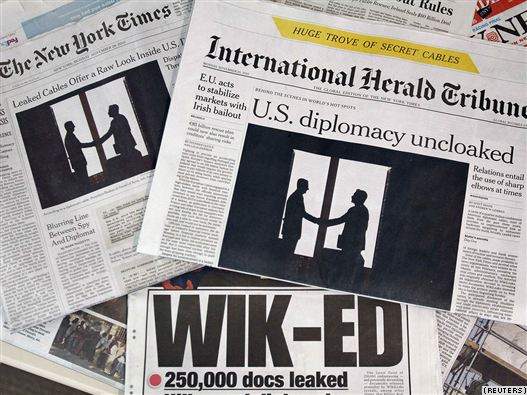 The U.S. is under attack by an enemy within. Skilled at game theory warfare, this foe targets the most sensitive realm of U.S. national security: its relations with other nations.

The online publication of a quarter-million documents chronicling diplomatic exchanges is notable both for what’s omitted and what’s included. To determine whether this latest release was a form of espionage, analysts need only examine how this treasure trove of trivia was peppered with documents certain to damage U.S. relations.

To identify its origins, analysts must answer a key question:

Cui Bono? To whose benefit?

One clue: the release of degrading and insulting language about Turkish leaders soon after they insisted in late October that the U.S. no longer share Turkish intelligence with Tel Aviv.

That request from a valued ally marks a critical step in isolating Israel by requiring that the U.S. shut down Israeli operations inside its 16 intelligence agencies, the White House and the Intelligence Committees in both the House and Senate. Tel Aviv was not pleased.

Turks remain outraged at the lack of accountability for the execution-style killing by Israel Defense Forces of nine Turkish citizens aboard a humanitarian ship that was boarded in international waters while sailing to Gaza with provisions to relieve an Israeli siege.

Was this release a tit-for-tat, Tel Aviv style? Is WikiLeaks the visible face of an Israeli disinformation campaign? Whose interests were served by disrupting U.S.-Turkish relations?

A leak on this scale is only a leak if it is a random data dump. If items were purposely included or excluded based on their intended effect, it’s an intelligence operation. Former National Security Adviser Zbigniew Brzezinski points out how this release is “seeded” with information that is “surprisingly pointed.”

Take for example the cables indicating that Chinese leaders are inclined to cooperate with the U.S. in reunifying North and South Korea under the leadership of the south. That information was guaranteed to embarrass China’s leaders, damage U.S. relations with Beijing and make reunification more difficult.

From a game theory perspective, that damaging result was fully foreseeable. With the U.S. economy teetering on a meltdown, the creation of a rift with America’s largest trading partner was also an assault on the economic strength required for the U.S. to sustain a viable defense.

Similarly, the pointed references to Arab leaders were destined to weaken their political credibility at home while complicating relations abroad. By exposing Arab displeasure with Iran, this operation also sharpened the divide between Sunni and Shiite Muslims, a source of ongoing tensions and a key barrier to forming a viable government in Iraq.

The effect was certain to complicate U.S. disengagement and raise America’s costs in both blood and treasure.

The cables involving Saudi leaders were released soon after Washington agreed to allow Riyadh to purchase $60 billion in U.S. aircraft and armaments over a multi-year period. Tel Aviv was not pleased.

By targeting the credibility of both Saudi Arabia and the U.S., this operation targeted the two nations pressing hardest for an end to Israel’s occupation of Palestine.

Transparency is the Biggest Threat

Has Tel Aviv panicked? After more than six decades of nonstop provocations while routinely portraying itself as the perennial victim, has Israel’s storyline lost traction?

Zionism faces an existential threat though not from Iran or those Tel Aviv portrays as “Islamo-fascists.” The threat lurks in the fast-emerging transparency that confirms pro-Israelis as the source of the intelligence that took the U.S. to war on false premises.

A critical mass of disinformation persuaded the U.S. to wage war in pursuit of an agenda long sought by Zionist extremists.

What’s included in the WikiLeaks release is pointed. What’s excluded is even more so: the lack of facts chronicling the role that Israel has long played in undermining U.S. interests.

Israel has escaped accountability for more than six decades. Was the WikiLeaks release “seeded” to discredit the U.S. at this time-critical juncture? The evidence suggests that what we see is not a data dump but a disinformation operation.

Last week, Israeli resistance to a peace plan was front-page news. This week the news is all about war with Iran. The Jerusalem Post immediately crowed that WikiLeaks “vindicated Israel” by citing Arab leaders’ concerns about Iran.

These latest releases even enabled Tel Aviv to suggest that if U.S. intelligence was flawed on a nuclear-armed North Korea, how can anyone trust America to contain a nuclear Iran?

To whom should this release be attributed? Who benefitted?

Jeff Gates is author of Guilt By Association – How Deception and Self-Deceit Took America to War.