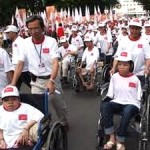 A number of US congressmen have voiced support for Vietnamese Agent Orange /dioxin victims, saying the US government must places importance on dealing with the consequences of the toxic chemical.

Chairman of the House Judiciary Committee John Conyers, Chairman of the House Foreign Affairs Subcommittee on Asia, the Pacific and the Global Environment Eni F.H. Faleomavaega and congressman Bob Filner affirmed the support during meetings with a delegation of the Vietnam Association for Victims of Agent Orange/Dioxin (VAVA) which paid a visit to the US from Nov. 22-Dec. 4.

Having organized three hearings on the AO/dioxin-related issue in Vietnam , Faleomavaega said he was regretful because he “had yet to do much for Vietnamese AO/dioxin victims”. The congressman also called on the governments of the US and Vietnam to jointly assume responsibility for addressing this issue.

At a working session with the VAVA delegation, headed by its President Sen. Lieut. Gen. Nguyen Van Rinh, US Department of State officials in charged for Southeast Asian affairs also affirmed the settlement of the AO/dioxin consequences in Vietnam is a priority of the department.

During the trip, the VAVA delegation and leaders of the Veterans for Peace (VFP) and the Vietnam Agent Orange Relief and Responsibility Campaign (VAORRC) discussed the coordination of activities to assist the victims in the coming time, especially on the 50th anniversary of the beginning of the US chemical war in Vietnam (August 10, 1961-August 10, 2011).

The delegates worked with the President of the Ford Foundation and representatives of the Atlantic Philanthropies. They also met with lawyers and scientists who have devoted to the victims’ struggle for justice, as well as a number of overseas Vietnamese who have launched initiatives to enhance relations between the Us-based Vietnamese community and the homeland.