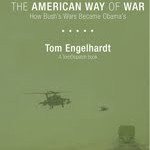 Tom Engelhardt says the Bush administration redefined patriotism and American identity, polarizing the country. Anyone who challenged the war, the Bush line went, must either be a “wuss” or a traitor … [or a “Defeatocrat”]

Review by Brad Birzer in The American Conservative

On Nov. 9, 1989 a number of students crowded into a tight dormitory room, one of the few with a TV, in Zahm Hall at the University of Notre Dame. They had gathered to watch history unfold, as thousands of East and West Germans came together armed with sledgehammers, hope, and joy to tear down the Berlin Wall, skipping, sliding, and shimmering across the top of that concrete monstrosity. Only eight years before, President Reagan, under the watchful eye of Our Lady of the Lake atop her Golden Dome, had stood a few buildings down from Zahm and identified communism as “some bizarre chapter in human history whose last pages are even now being written.” The prophecy was coming true, right there on the screen.

Since the early 1960s, Ronald Reagan had been planning an end to the Cold War in what might only be described as the equivalent of a mixture of fantasy baseball and the board game Risk. He stated his aim openly throughout his two terms as president, but predictably few believed him. The kind dismissed his words as simple optimism from a lovable actor. The cynical—including those who helped shape public opinion—dismissed Reagan’s words as misguided, destabilizing, idiotic, colored by too many White House screenings of “Star Wars.”

But even after Reagan’s vision was fulfilled, the Cold War did not end. The events of 1989 should have offered the West some breathing room, a time to rethink the purpose of our nation and reinvigorate republican ideals. Instead, the past two decades, under Republican and Democratic administrations alike, have revealed America and the West as morally and spiritually bankrupt. Plunder and torture best symbolize the bloated American Empire of the last 20 years, a force that exists merely for the sake of self-perpetuation. Our standing in the world has declined precipitously. At home, many are angry and want to change, organize, and harangue. Despite their best intentions, they stand impotent, comprehending neither the past nor the present, looking at the future—when not navel-gazing—with understandable dread.

When voters elected Barack Obama in 2008, his supporters acclaimed him higher than a prophet; he was messianic. As one fine and intelligent person—an expert in high tech as well as a farmer—wrote to me in immediate post-election euphoria, “Brad, why are you so upset, don’t you realize that we finally have a chance to end war and poverty, permanently?”

What the Obama administration has delivered, of course, is not only the continuation of the policies of the previous three administrations but a profound exaggeration of them. If anything, we suffer more violations of our privacy and civil liberties now than at any time during the Bush administration, all in the name of a national-security state that keeps the populace in its place while perpetuating war abroad.

In his soul-searching, illuminating, and often depressing look at the unholy ménage of Demos, Leviathan, and Mars, Tom Englehardt probes deeply into the war culture of Washington, D.C. He notes that only two positions have any real voice in contemporary public-policy debate: those who want more of this and those who want more of that. The key word is “more.” As Englehardt writes, when it comes to conflict overseas “however contentious the disputes in Washington, however dismally the public viewed the war, however much the president’s war coalition might threaten to crack open, the only choices were between more and more.” More drones, more troops, more nation-building.

So much for campaign promises and the new messiah who would end war and poverty permanently. The first military budget Obama submitted, Engelhardt notes, was larger than the last one tendered by the Bush administration. “Because the United States does not look like a militarized country, it’s hard for Americans to grasp that Washington is a war capital, that the United States is a war state, that it garrisons much of the planet, and that the norm for us is to be at war somewhere (usually, in fact, many places) at any moment.”

Further, as the Washington Post revealed this past summer in a penetrating series on the intelligence community, no one knows exactly how many persons in how many agencies are spending what levels of taxpayer dollars to keep the espionage machine running. Engelhardt argues the intelligence communities are as bloated as any part of the Department of Defense. (Too bad we don’t still call it the Department of War, which would be far more honest.)

As further evidence of our degeneration into a martial empire, the U.S. sells 70 percent of the weapons in the international arms trade. In almost every way, Engelhardt contends, the United States precipitates the militarization of the globe.

How far and fast we’ve fallen since the relatively peaceful days of the Reagan era. Four interventionist administrations later, we find ourselves as the leaders of international vice and terror. What happened, Englehardt asks, to the republic our Founders bequeathed to us? What have we done with and to our inheritance?

In the background, I can hear Steve Horgarth’s wonderfully English voice from the film “Brave”: “The Cold War’s gone, but those bastards will find us another one. They’re here to protect you, don’t you know. Get used to it.” He was right.

The bastards have placed barbed wire, barricades, cameras, and uniformed persons throughout the once republican capital of the United States, Washington, D.C. Those bastards control the levers of power throughout the country, not just inside the Beltway. They just made my wife and I remove our shoes and belts and hand over to the federal government any bottles of liquids with three ounces or more. The bastards are everywhere. And it seems America isn’t enough for them: avarice begets avarice.

With an excellent mind and an equally fine pen, Engelhardt demonstrates true patriotism to the America founding and to the larger humane and irenic ideals of the West:

What a world might be like in which we began not just to withdraw our troops from one war to fight another, but to seriously scale down the American global mission, close those hundreds of bases—as of 2010, there were almost 400 of them, macro to micro, in Afghanistan alone—and bring our military home is beyond imagining. To discuss such obviously absurd possibilities makes you an apostate to America’s true religion and addiction, which is force.  However much it might seem that most of us are peaceably watching our TV sets or computer screens or iPhones, we Americans are also—always—marching to war. We may not all bother to attend the church of our new religion, but we all tithe. We all partake. In a sense we live peaceably in a state of war.

Reading such good prose invigorates like little else in this world of sorrows. But one should not consider Engelhardt merely a writer of golden prose. This body has a soul as well, and Engelhardt convincingly presents evidence as well as argument throughout the book.

In the first chapter, he shows how the George W. Bush administration went from nothing to everything, how 9/11 “called” Bush to lead a crusade and to give his presidency drive, and perhaps most importantly how the country came to be transformed into a “homeland.” Next, Engelhardt considers how to garrison a planet: “Imagine the hubris involved in the idea of being ‘global policemen’ or ‘sheriff’ and marching into a Dodge City that was nothing less than Planet Earth itself.” American bureaucrats, diplomats, and army engineers swarmed the globe, remaking a post-Cold War world into post-post-Cold War one. “Naturally, with a whole passel of bad guys out there, a ‘global swamp’ to be ‘drained,’ we armed ourselves to kill, not stun.”

The American Way of War is brimming with insights. Engelhardt develops the fascinating argument that the history of the past 11 decades is the history of the airplane and our use of it for war, from the Sopwith Camel to the drone piloted remotely out of Las Vegas. In rather Chomsky-like (or perhaps Orwellian) fashion, one of Engelhardt’s later chapters explores the perversion of words in the English language to make the idea of war more palatable for the public and keep perpetual conflict “hidden in plain sight.” Engelhardt claims the Bush administration redefined patriotism and American identity, polarizing the country. Anyone who challenged the war, the Bush line went, must either be a “wuss” or a traitor.

In great detail, the author shows the continuity of thought from Clinton to Obama, revealing, not surprisingly, that the current president controls, possesses, and wields the greatest amount of power—in terms of military, real estate, and budget—anywhere or anytime. Never did Obama plan to follow through with his peace promises made during the 2008 campaign.

Too often, Engelhardt sagaciously concludes, Americans spend their time in a future that cannot possibly be known, imagining their country’s role as savior and messiah. But Engelhardt notes that only the past can reveal our true selves. “Not even Americans can occupy the future,” he writes. “It belongs to no one.”

Not even to the bastards.

Brad Birzer is the Russell Amos Kirk Chair in American Studies and Professor of History at Hillsdale College. He is the author, most recently, of American Cicero: The Life of Charles Carroll.