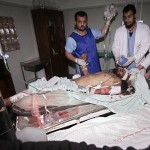 In an ongoing assault on the occupied Gaza Strip, Israeli fighter jets struck the southern city of Rafah early this morning, injuring four. The IMEMC reported that four Palestinians were wounded in the attack, which destroyed an alleged “training base” for the armed wing of the Hamas party (“Army bombards Rafah,” 22 December 2010).

Via The Electronic Intifada

Israeli attacks of the illegally occupied Gaza strip are nothing new. Veterans Today recommends Norman G. Finkelstein’s brilliant and powerful ‘This Time We Went Too Far,’  a shocking, rigorously researched book chronicling the “December 2008 Israeli invasion nightmare of unimaginable proportions” that left 1,400 Gazans killed, 6,000 homes destroyed or badly damaged, and … in one of the world’s poorest areas … destruction and disruption of economic life … estimated at more than $3 billion.”

“Better than any other book, ‘This Time We Went Too Far’ shows how the massive destruction visited on Gaza was not an accidental byproduct of the Israeli invasion but its barely concealed objective.” — Raja Shehadeh, author, Palestinian Walks

Ma’an News Agency reported that two Palestinian fighters and one security guard were injured in the missile strike on Khan Younis after Israeli warplanes destroyed a dairy and an entertainment center (“Israeli jets hit Gaza for 2nd time in day,” 21 December 2010). Israeli jets also struck tunnels at the southern border with Egypt. The tunnels are used by Palestinians to bring in essential items, including food, medicine, cement and thousands of other goods from Egypt and the outside world. Israel has imposed a years-long blockade on Gaza, rarely opening the border crossings and maintaining severe restrictions on the movement of people and goods.

These attacks follow similar Israeli airstrikes on Saturday, 18 December, in which five Palestinian men, all around twenty years old, were targeted by an Israeli missile in Deir al-Balah, according to Ma’an (“Medics recover bodies of 5 killed in Gaza strike,” 19 December 2010).

Israel claimed that the five young men were affiliated with an armed resistance group called the Jaljalat, and they were planning to launch a rocket over the boundary with Israel.

On Sunday, armed Palestinian resistance groups responded to Saturday’s attacks by firing a series of homemade rocket shells into Israel. The shells landed in the Negev desert, causing no injuries or damage, according to the International Middle East Media Center (IMEMC) (“Eight separate Israeli airstrikes reported throughout Gaza; 2 injured,” 21 December 2010). Additional rocket fire was reported on Monday as well, causing no injuries.

On Tuesday, following Israel’s overnight airstrikes, Israeli daily Yedioth Ahronoth(Ynet) reported that a Gaza-fired rocket landed near a kindergarten in a kibbutz near Ashkelon, just north of the boundary with Gaza. A 14-year-old Israeli girl was lightly injured, Ynet reported (“Qassam explodes near kindergarten,” 21 December 2010).

Speaking to Ma’an News, an Israeli military spokesperson said Israel’s attacks on Gaza were “in response” to 13 homemade projectiles launched across the boundary with Israel this week (“Palestinian sources: Israel warplanes raid Gaza,” 21 December 2010). The spokesperson said that the military attacked four “Hamas tunnels,” a “smuggling tunnel” near Rafah, a “weapons manufacturing facility” and a “terror activity center.”

However, The Electronic Intifada’s correspondent in Gaza, Rami Almeghari, reported that the buildings targeted by the Israeli Air Force were not centers for “terror activity.”

“They targeted a dairy and an entertainment center in Gaza … Israel did not target some sort of proclaimed facilities for homemade rockets,” he stated.

Almeghari added that Israel’s latest attacks are a “systematic targeting” of the Palestinians inside Gaza in order to weaken the popular support for the elected Hamas government.

He added that the failure of the US-brokered peace talks allows Israel to continue attacking Palestinians in the Gaza Strip. By not addressing Israel’s ongoing violations of international law, including the ongoing confiscation of Palestinian land for settlement construction in the West Bank, including East Jerusalem, the international community is culpable for the situation across Palestine, Almeghari said.

“Israel only attacks for the sake of attacking, and by squeezing Palestinians in Gaza at the political level to accept Israel’s terms for peace,” Almeghari said.

Meanwhile, Israel’s attacks on fishermen, industrial workers and shepherds have continued. As The Electronic Intifada has reported, industrial workers are frequently shot while collecting raw materials near Israel’s so-called “buffer zone” — a 300-meter-long militarized area along the northern, eastern and maritime boundaries.

On 10 December, Suhaib M., a 15-year-old Palestinian boy, was shot and injured while he collected wood inside the no-go zone alongside the northern boundary with Israel. Defense for Children International-Palestine Section reported that the boy and his brothers have been collecting raw materials in order to supplement their family’s income for the last five months. Suhaib and his brother Belal were loading pieces of wood from uprooted olive trees into a small cart when he was shot in the leg by an Israeli sniper (“Report: Voices from the Occupation ,” 18 December 2010 [PDF]).

Additionally, a man in his thirties was shot in his foot on 20 December by Israeli snipers as he collected stones in the northern Gaza Strip, according to Ma’an. Israeli forces opened fire on the man near the town of Beit Hanoun (“Worker injured in north Gaza,” 20 December 2010).

A 19-year-old shepherd, Ijmeian Abu Ihweishel, was shot by Israeli snipers on 19 December as he herded his flock of sheep in the same area, reported Ma’an (“Palestinian teen reported injured in north Gaza,” 19 December 2010).

Gaza’s health ministry reported that there have been 103 Palestinians shot by Israeli forces near the no-go zone since March 2010, Ma’an added.

Two days earlier, on 17 December, a Palestinian teenager died after being shot on a fishing boat off the southern Gaza coast by Israeli warships permanently stationed in the Mediterranean Sea. Agence-France Presse and Ma’an reported that Israeli forces fired on the small fishing boat, capsizing it and injuring 15-year-old Ziad Samir al-Bardawil, who died after being treated at a local hospital (“Gaza teen dead after Israel fires on fishing boat,” 17 December 2010).

In an article following al-Bardawil’s death, the right-wing Israeli daily The Jerusalem Postquoted Israeli military sources who refuted the Ma’an report. The Israeli military said that it “does not recognize the event” and claimed it had nothing to do with the death of the Palestinian boy.

Although Israeli government officials have placed emphasis on the so-called “easing” of the blockade, Israel has done little to change the humanitarian situation for Palestinians inside the Gaza Strip, according to a new report signed by 22 major international human rights organizations, including Amnesty International UK, Oxfam International and the International Federation for Human Rights (“Dashed Hopes: Continuation of the Gaza Blockade ,” 30 November 2010 (PDF file)).

The report states that the inflow of construction materials, for example, is only at 11 percent of pre-blockade levels, food imports are only at 35 percent and the import of raw materials is still restricted.

Additionally, there is a strict ban on exported goods, a policy that has debilitated Gaza’s struggling economy. IMEMC reported that Israel has allowed only the exports of strawberries and carnations from Gaza this week, under the auspices of a Dutch governmental program to assist Gaza’s local farmers (“Israel opens only Kerem Shalom border,” 21 December 2010).

Jeremy Hobbs, director of Oxfam International, said in a press release related to the “Dashed Hopes” report that “only a fraction of the aid needed has made it to the civilians trapped in Gaza” (“Six months on: Little sign of improvement in Gaza since Israeli easing of blockade, shows report from aid and human rights groups,” 30 November 2010).

He added that “Israel’s failure to live up to its commitments and the lack of international action to lift the blockade are depriving Palestinians in Gaza of access to clean water, electricity, jobs and a peaceful future.”