Monsanto’s Agent Orange; the gift of death that keeps on killing …

By Tim King at Salem-News.com

(BALTIMORE, Md.) – Deadly poisons at Fort Detrick in Frederick tied to Agent Orange and the Vietnam War period, have prompted public health officials in Maryland to warn that certain cancers are appearing to occur among younger people who live near the Army Base than in people statewide.

Clifford Mitchell of Maryland’s Department of Health and Mental Hygiene, told The AP Monday that investigators will probe deeper into the discrepancies involving liver, bone and endocrine cancers.

Marked differences in liver cancer have been noted, and health experts in Maryland as well as the EPA, say the matter needs substantial further investigation.

Our writer Chuck Palazzo knows about Agent Orange, more I suspect than any person should ever need to know. Chuck was a Marine in Vietnam. Today he lives in Vietnam and works in numerous projects to benefit the people in this place where he once fought. One of his articles, ‘Victims of Victims’, provides a memorable account of the sufferings that generations of Vietnamese have inadvertently handed down. Of course this is a major problem for the offspring of Americans who were in contact with Agent Orange.

I asked Chuck if he was surprised to learn of this development. 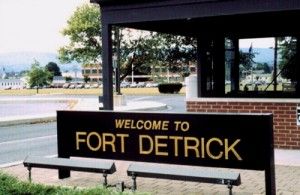 “Public pressure, especially by those veterans who have been directly affected including their family members demands more study. I am not surprised to hear of this development and won’t be surprised if a direct link is found between the victims in and around Ft. Detrick and Agent Orange,” said Palazzo.

Palazzo agrees that it is heartening to see public officials speak out, though no statements like these can ever come fast enough. We recently saw two Irvine City Council members in California speak up about the contamination of Marine Corps Air Station El Toro, though it was too little, too late. Now we have Maryland officials attempting to do the right thing. Palazzo explains that it can be a complex political picture.

“I believe Maryland is attempting to do the right thing, albeit years late. Unfortunately, the Federal Government will have to participate if full disclosure is to be known. State and local officials are seldom privy to all that is occurring on or even close to a military installation of any kind.”

Agent Orange is a chemical defoliant that was sprayed over the jungles of Vietnam during the US war there to thin the vegetation and reveal enemy positions. The chemical is manufactured by Monsanto, possibly the most despised company in America; one that never had to atone for the millions of death related to their lack of testing and honesty. Today both American and Vietnamese families continue to suffer the effects of Agent Orange contamination. As that occurs, Monsanto has become the main group in the world responsible for the development of genetically modified (GMO) food, that modifies nature, makes plant seeds both sterile and ’roundup ready’ meaning they can be doused with poison so they grow faster and bigger and make Monsanto and farmers willing to or in some cases forced to work with Monsanto, lots of cash. Where it will lead the population however, is yet to be seen.

It was announced that researchers will examine the cases in greater detail and look at others as far back as 1992.

They clearly state that Fort Detrick’s environmental contamination must be cleaned up, and that the officials charged with public health are taking related concerns about possible health impacts seriously. Agencies working on the Fort Detrick contamination are:

They’re say they are working on the necessary actions to be taken by the Army in investigate and remediate the environmental concerns. The environmental investigation and clean-up of Fort Detrick are overseen by the EPA, with the support of MDE.

Those familiar with Salem-News.com know that we try our best to keep up on the contamination of the now closed El Toro Marine Air Station in Southern California, and also the Marine Corps base at Camp Lejeune, North Carolina. The Naval Air Facility in Atsugi, Japan is another contaminated place our writers have addressed. My fear as we go through the motions of reporting these stories, is that there is far more contamination on American military bases than we possibly have even begun to realize.

Regarding the Agent Orange testing and industrial chemical of Fort Detrick, the agencies listed above say they are in ongoing communication with the Kristen Renee Foundation, an endowment devoted to financing the research and cure for brain cancer in memory of Kristen Renee White, who died at the age of 30, on 30 April 2008 after a difficult battle with brain cancer.

They believe that some people who lived nearby developed cancers because of Fort Detrick and that independent testing shows evidence of dioxins/Agent Orange that could be linked to the cancers. They say they understand the serious questions and concerns that remain, particularly when a loved one’s health is at stake.

The Frederick County Health Department held a public meeting on 12 August 2010; additional meetings are planned where they plan to hear and address questions and also to gather information.

Their news release stated: “For now, the Department of Health and Mental Hygiene is reviewing available data from the Maryland Cancer Registry to assess numbers and types of cancers for the area immediately surrounding Fort Detrick and compare them with cancer rates for Frederick County and the state as a whole. DHMH and the Frederick County Health Department will review these data from the Registry, and any additional information provided by the public, to determine further steps in the investigation.”

The EPA and MDE say they want more testing for Agent Orange contaminants to take place at the base, in addition to the series of on-going requirements for sampling and investigation already required under federal and state law.History of Fort Detrick

Wikipedia has very interesting information about this east coast base; they cite a 28 September 1994 U.S. General Accounting Office report, stating that between 1940 and 1974, DOD and other national security agencies studied hundreds of thousands of human subjects in tests and experiments involving hazardous substances. Human guinea pigs?

A quote from the study: “Many experiments that tested various biological agents on human subjects, referred to as Operation Whitecoat, were carried out at Fort Detrick, Maryland, in the 1950s. The human subjects originally consisted of volunteer enlisted men. However, after the enlisted men staged a sitdown strike to obtain more information about the dangers of the biological tests, Seventh-day Adventists [SDAs] who were conscientious objectors were recruited for the studies.”

As a sidenote, the fact that the government was able to persecute a particular religious group that actually follows the teachings of Christ, is like a double barrel blast of irony for a nation supposedly founded on moral principles.

So you’re getting the idea that this base isn’t just s problem because of nearby people are becoming sick with cancer; there are decades of questionable activity affecting the land and the people. The Defense Department has a real history of avoiding environmental responsibility. I know what has become of the Marine bases, there are far fewer of those, than there are US Army bases in the world. It is very concerning knowing how many Marines and former Marines are affected.

Our writer and good friend Chuck Palazzo agrees that this continued public outing of a contaminated Maryland army base is likely one of far too many, “More locations indeed await discovery. I believe we are still at the ‘tip of the iceberg”‘ stage in determining the exact extent of all Agent Orange production, storage, transit, testing and use.”

There is a wide range of problems contaminating military bases. Chuck Palazzo cautioned against concluding the Agent Orange is the only problem, “Let’s all remember that Ft. Detrick was the home to the US Biological Weapons Program from the 1940’s until 1969. My fear is that Agent Orange is not the only poison the citizens of that community are to be concerned about.”

According to the collaboration of agencies: A number of environmental studies conducted over the years revealed contaminated groundwater near the Fort’s ‘Area B.’ Residences with individual drinking water wells that had the potential to be affected by groundwater contamination were provided bottled water and later connected to the local public water supply. To accelerate the investigation and cleanup, in 2008 MDE requested that Area B of Fort Detrick be promptly placed on the National Priorities List, also known as the Superfund list. In 2009, EPA did so.

Since that time, EPA has been overseeing the cleanup at Fort Detrick, with full support and assistance from MDE, with progress continuing to be made. A long-term sampling program has been implemented at Area B to properly characterize the groundwater and determine what, if any, treatment system may be necessary. MDE, EPA, and the Army are holding technical meetings to discuss the appropriate methods for investigating groundwater contamination at Area B, and a final work plan for the next phase of the investigation is in the final stages of development.

Recently, Fort Detrick announced that it had completed capping the landfill at Area B.

They are encouraging anyone with relevant information to share it with the Frederick County Health Department by sending an e-mail to [email protected] or by calling 301-600-7400.

The Frederick County Health Department announced in August that they planned to convene a series of community meetings to respond to public comments and questions and to provide an opportunity for subject matter experts to discuss what is known and what is planned as it relates to the health and environmental concerns related to Fort Detrick.

Tim King: Salem-News.com Editor and Writer Tim King is a former U.S. Marine with twenty years of experience on the west coast as a television news producer, photojournalist, reporter and assignment editor. In addition to his role as a war correspondent, this Los Angeles native serves as Salem-News.com’s Executive News Editor. Tim spent the winter of 2006/07 covering the war in Afghanistan, and he was in Iraq over the summer of 2008, reporting from the war while embedded with both the U.S. Army and the Marines.

Tim holds numerous awards for reporting, photography, writing and editing, including the Oregon AP Award for Spot News Photographer of the Year (2004), first place Electronic Media Award in Spot News, Las Vegas, (1998), Oregon AP Cooperation Award (1991); and several others including the 2005 Red Cross Good Neighborhood Award for reporting. Tim has several years of experience in network affiliate news TV stations, having worked as a reporter and photographer at NBC, ABC and FOX stations in Arizona, Nevada and Oregon. Serving the community in very real terms, Salem-News.com is the nation’s only truly independent high traffic news Website. As News Editor, Tim among other things, is responsible for publishing the original content of 65 Salem-News.com writers. He reminds viewers that emails are easily missed and urges those trying to reach him, to please send a second email if the first goes unanswered. You can send Tim an email at this address: [email protected]