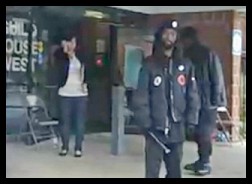 I don’t care much about this silly story and, apparently, neither did any voters. Not a single one of them filed a complaint of “voter intimidation” during the 2008 “incident” captured on video for a minute or so outside a polling place in a largely minority area of Philadelphia and then played endlessly on Fox “News” ever since. Naturally, the footage is always accompanied by some sort of pretend “outrage” from the Fox host in each instance.

By Brad Friedman at The Brad Blog

As the incident has even less relevance to the lives of Americans as the death of Natalie Holloway, we haven’t covered it more than once or twice here, most recently last July when Washington Post Ombudsman Andrew Alexander took the bait in support of his paper’s regard of the non-story as some sort of “political bombshell”.

Editor’s Note: Brad is getting pretty cocky. Doesn’t Brad know that under the Tea Party movement’s influence, “the new Republican majority has ordered that the United States Constitution be read on the floor of the House of Representatives … .  Congressional historians say they believe this has been done only twice before.” (NYT) Amazing and brave, and Brad ridicules these courageous souls! Let us pray for Brad Friedman because God is reading.

But, with the death-by-fake-scandal of ACORN, the Republicans need something on which to hang their fake, vaguely “voter fraud”-related, very much black people-related investigations in Congress as they take over the majority in the House. So, get used to it. We’re all gonna be forced to hear about this silly story — over and over again — whether we like it or not, in the coming months (and, probably even years!) as the GOP hold hearings and “investigations” on this story, rather than on ones which actually matter.

So to that end, if you’re not already familiar with the ridiculous “scandal” concerning the “intimidation” by two jackasses from the so-called “New Black Panther Party” at a polling place in 2008, Adam Serwer’s summary at WaPo today(of all places) has you covered. He’s even honest enough to take his paper on directly for the ink they continue to give to the non-story courtesy of their Rightwing columnist (one of many) Jennifer Rubin.

Gosh, I wonder if, when the GOP hold their hearings on “voter intimidation” at the polling place, they’ll also be demanding that Eric Holder prosecute this guy as well. Somehow, I’m doubting it.