Home World FALK: Israel’s violence against Separation Wall protests – along the road of... 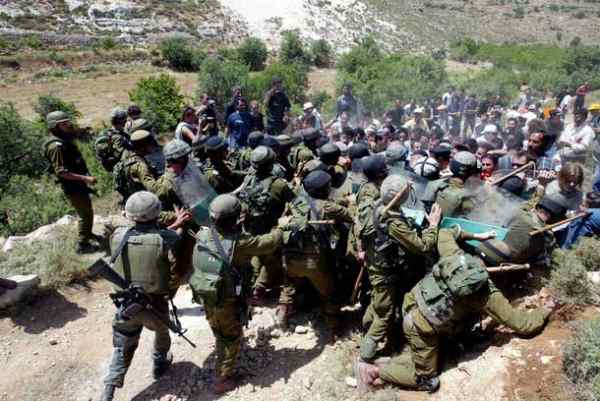 Palestinian, foreign and Israeli peace activists are held back by Israeli soldiers as they demonstrate in the West Bank village of Artas close to the Biblical town of Bethlehem to protest against the building of the Israeli controversial separation barrier across Palestinian land, 25 May 2007. Israel justifies its massive barrier, made of electric fencing, barbed wire and concrete walls, by saying it needs to stop potential attackers from infiltrating the country and settlements in the West Bank.  In 2004, the International Court of Justice issued a non-binding ruling that parts of the 650-kilometre (410-mile) barrier criss-crossing the West Bank are illegal and should be torn down. Israel has vowed to complete the project. AFP Photo Credit: MUSA Al-SHAER

One of the flashpoints in Occupied Palestine in recent years has involved peaceful weekly protests against continued Israeli construction of a separation wall extending throughout the whole of the West Bank. A particularly active site for these protests has been the village of Bil’in near the city of Ramallah, and it is here where the Israeli penchant to use deadly force to disrupt nonviolent demonstrations raises deep legal and moral concerns. These concerns are accentuated when it is realized that way back in 2004 the International Court of Justice (the highest judicial body in the UN System) in a rare near unanimous ruling declared the construction of the wall on occupied Palestinian territory to be unlawful, and reached findings ordering Israel to dismantle the wall and compensate Palestinians for the harm done. Israel has defied this ruling, and so the wall remains, and work continues on segments yet to be completed.

It is against this background that the world should take note of the shocking death of Jawaher Abu Rahma on the first day of 2011 as a result of suffocation resulting from tear gas inhalation while not even being part of the Bil’in demonstration. Witnesses confirm that she was standing above the actual demonstration as an interested spectator. It was a large year end demonstration that included the participation of 350 Israeli and international activists. There was no excuse for the use of such a harsh method of disrupting a protest against a feature of the occupation that had been pronounced to be unlawful by an authoritative international body. As it happens the brother of Ms. Rahman had been killed a few months earlier by a tear gas canister fired with a high velocity from a close range. And there are many other reports of casualties caused by Israel’s extreme methods of crowd control. International activists have also been injured and harshly detained in the past, including the Irish Nobel Peace Laureate, Mairead Maguire. Together these deaths exhibit a general unacceptable Israeli disposition to use excessive force against Palestinians living under occupation. Just a day later an unarmed young Palestinian, Ahmed Maslamany, peacefully on his way to work was shot to death at a West Bank checkpoint because he failed to follow an instruction given in Hebrew, a language he did not understand.

When this lethal violence is directed against unarmed civilians seeking to uphold fundamental rights to land, routine mobility, and self-determination  it dramatizes just how lawless a state Israel has become and how justifiable and necessary is the growing world campaign of delegitimation centered upon the boycott, divestment, and sanctions movement (BDS). Each instance of Israeli excessive and criminal violence inflicts suffering on innocent Palestinian civilians, but it also is a form of martyrdom in the nonviolent Legitimacy War that the Palestinians have been waging within Palestine and on the symbolic global battlefields of world public opinion with growing success.

Israel knows very well how to control unruly crowds with a minimum of violence. It has demonstrated this frequently by the way it gently deals, if it deals at all, with a variety of settler demonstrations that pose far greater threats to social peace than do these anti-wall demonstrations. It is impossible to separate this excessive use of force by Israel on the ground against Palestinians from the indiscriminate use of force against civilians in Israel’s larger occupation policy, as illustrated by the cruel punitive blockade that has been imposed on the people of Gaza for more than three years and by the criminal manner in which carried out attacks for three weeks on the defenseless population in Gaza exactly two years ago. Is it not time for the international community to step in and offer this long vulnerable Palestinian population protection against Israeli violence? 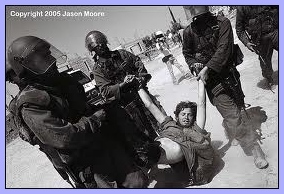 Underneath Israel’s reliance on excessive force as a matter of strategic doctrine are thinly disguised racist ideas: Israeli lives are worth many times the value of Palestinian lives and Palestinians, like all Arabs, only understand the language of force (an essentially genocidal idea launched influentially years ago in a notorious book The Arab Mind by Raphael Patai published in 1973. It is also part of a punitive approach to the occupation, especially in Gaza, where WikiLeaks cables confirm what was long suspected: “As part of their overall embargo plan against Gaza, Israeli officials have confirmed to [U.S, Embassy economic officers] on multiple occasions that they intend to keep the Gaza economy on the brink of collapse without quite pushing it over the edge.” (cable reported on Jan. 5, 2011, Norwegian daily) Then Prime Minister Ehud Olmert in a speech delivered in January 2008 said of the blockade: “We will not harm the supply of food for children, medicine for those who need it and fuel to save lives..But there is no justification for demanding we allow residents of Gaza to live normal live while shells and rockets are fired from their streets and courtyards (at southern Israel).”

This is a clear confession of collective punishment of a civilian population by Israel’s political leader at the time, violating the unconditional prohibition of Article 33 of the Fourth Geneva Convention. Such gross criminality should subject Israeli political leaders to international mechanisms designed to impose accountability on individuals responsible for the commission of crimes against humanity. It also makes it evident that the blockade is punitive, not responsive to cross-border violence that incidentally at all times was far more destructive of Palestinian lives and property than that of Israelis. Beyond this, the Hamas leadership in Gaza had since its election repeatedly attempted to establish a ceasefire along its border, which when agreed upon with the help of Egypt reduced casualties on both sides to almost zero after being establishment in mid-2008. This ceasefire was provocatively disrupted by Israel on November 5, 2008 to set the stage for launching of the massive attacks on Gaza, lasting for three weeks after being initiated on December 27th of 2008.

In that war, if such a one-sided conflict should be so described, the criminality of the tactics relied upon by the Israeli Defense Forces Amnesty International and Human Rights Watch. There is no reasonable basis for any longer doubting the substance of the allegations of criminality associated with those three weeks of all out attacks on the people and civilian infrastructure, including UN schools and buildings. has been abundantly documented by The Goldstone Report, by a comprehensive fact-finding mission headed by John Dugard under the auspices of the Arab League, and by detailed reports issued by

The Goldstone Report correctly noted that the overall impression left by the attacks was an extension of the Dahiya Doctrine attributed to an Israeli general during the Lebanon War 2006 in which the Israeli destruction from the air of a district in South Beirut was a deliberately excessive response, at the expense of civilian society, because of being an alleged Hezbollah stronghold, and in response to a border incident in which ten Israeli soldiers lost their lives in an encounter with Hezbollah combatants. The 2009 Goldstone report Gadi Eisenkot, who said, “What happened in the Dahiya quarter of Beirut in 2006 will happen in every village from which Israel is fired on. We will apply disproportionate force on it and cause great damage and destruction there. From our standpoint, these are not civilian villages, they are military bases. […] This is not a recommendation. This is a plan. And it has been approved.” In effect, the civilian infrastructure of adversaries such as Hamas or Hezbollah are treated as permissible military targets, which is not only an overt violation of the most elementary norms of the law of war and of universal morality, but an avowal of a doctrine of violence that needs to be called by its proper name: STATE TERRORISM. quoted IDF Northern Command Chief

We have reached a stage where the oppressiveness of the Israeli occupation, extending now for more than 43 years and maintained in multiple daily violations of international humanitarian law.  In its essence and by design the Israeli occupation of the West Bank, East Jerusalem, and the Gaza Strip should be understood and condemned as STATE TERRORISM as exhibited both in structure and practice.

Richard Falk , Professor Emeritus of International Law at Princeton University is also author of  Explorations of the Edge of Time : The Prospects for World Order;Crimes of  War: Iraq and The Costs of War: International Law the UN and World Order after Iraq. He is the current  UN’s Special Rapporteur for Human Rights in the Occupied Palestinian Territories.