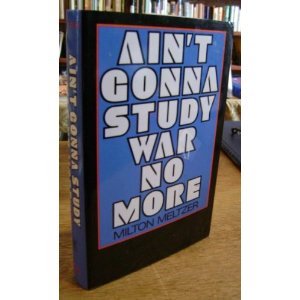 We the undersigned share with nearly two-thirds of our fellow Americans the conviction that our wars in Afghanistan and Iraq should be ended and that overall military spending should be dramatically reduced. This has been our position for years and will continue to be, and we take it seriously. We vow not to support President Barack Obama for renomination for another term in office, and to actively seek to impede his war policies unless and until he reverses them.

ADD YOUR NAME TO PEACE DEMAND TO PRESIDENT OBAMA

Via War Is a Crime

Since he became president, Obama has had three opportunities to work with Congress to reduce military spending, but instead has championed increases in that spending each time, despite the fact that this spending represents a clear threat to the economic future of our country.  He has continued as well to try to hide the true costs of the wars by funding them with off-the-books supplemental spending bills, despite the fact that he campaigned against this very practice.

The President has escalated a war on Afghanistan in which rising civilian deaths and atrocities have become routine.

He has given the CIA even greater freedom of action to launch lethal drone strikes against civilian houses in Pakistan on mere assumption of some connection with Taliban or other organizations, despite the warning from the U.S. Ambassador in late 2009 — revealed in a Wikileaks cable — that such attacks could “destabilize” the Pakistani government, despite many reports that civilians, including children, are disproportionately victims, and despite the contention of the United Nations and many U.S. allies that this practice is illegal.

Obama has approved an increase in covert operations by CIA-controlled Afghan troops into Pakistan, and his administration has remained silent while the U.S. command in Afghanistan leaked to the New York Times plans for new Special Operations Forces raids into Pakistan aimed at Afghan Taliban targets.

The President has expanded the use of Special Operations Forces (SOF), operating in virtually total secrecy and without any accountability to Congress, in one country after another.  SOF troops are presently in some 75 nations — 15 more than when Obama took office.

President Obama has, on a later schedule than he campaigned on, finally reduced U.S. troop presence in Iraq.  But he has not fully withdrawn U.S. combat forces from Iraq or ended U.S. combat there, his claims to have done so notwithstanding.  His vice president has suggested, without correction by the President, the possibility of a U.S. military presence in the country even after the deadline for withdrawal under the U.S.-Iraq withdrawal agreement, if only through the use of military contractors.

The Obama administration has announced plans to form an army of mercenary troops from private military contractors in Iraq which is to have its own air force and its own fleet of mine-resistant military vehicles.  The plan includes continued contracts with the company formerly called Blackwater, despite the knowledge that it was guilty of atrocities against civilians in that country, and despite the openly declared opposition of the Iraqi government to such a continued role.

Obama has overseen increased weapons sales to foreign nations, and assisting in those sales has been a major function of his State Department.  He has approved increased funding for work on nuclear weapons, even while supporting an arms control treaty.  He has established a policy of potential nuclear first strike against Iran or North Korea.

The President has supported sanctions against Iran and Syria that punish the people, especially children, and not the leadership, of those countries.  He has sent ships and missiles to Iran’s border.  He has risked hostilities with North Korea through the ongoing construction of new military bases in South Korea and provocative war games exercises.  His administration has helped a military coup succeed in Honduras.

President Obama has sought to allow more Israeli settlements in Palestinian territories.  He has protected Israel’s killing of activists on a humanitarian aid ship, not even protesting at the murder of an unarmed American youth.  He issued a presidential memorandum on October 25, 2010, giving U.S. approval for the use of child soldiers by Chad, the Democratic Republic of the Congo, Sudan, and Yemen.  He has backed Indonesian armed forces that assassinated civilian activists in late 2009.  He has expanded the U.S. military presence in Colombia, Costa Rica, Haiti, Guam, Italy, and Diego Garcia, as well as overseeing an enormous military base construction project in Afghanistan.

President Obama has not closed the prison at Guantanamo Bay and continues to maintain a network of detention facilities in Afghanistan through which prisoners, according to the most recent information available, are still being subjected to harsh treatment.  He has claimed the right to imprison people, including American citizens, indefinitely without charge or trial, thus further cementing in place the elimination of the rights of prisoners of war and the elimination of the right of habeas corpus for anyone, as well as the rights found in the Fourth through Eighth Amendments to the U.S. Constitution.  The President has claimed the power of rendition.  His CIA Director Leon Panetta and his senior advisor David Axelrod have asserted, without correction by the President, that the President maintains the power to torture.  In the recent case of Gulet Mohamed, the Obama administration, for a time, claimed the power to forbid an American to reenter the country, absent any conviction or even any charge of a crime, and apparently collaborated with Kuwait to torture that American.  The President has also openly claimed the power to order the assassination of Americans abroad.  In Iraq, the U.S. military has continued to work with and protect from accountability an Iraqi military that is known to regularly use torture.

The President has expanded the use of warrantless spying.  Under his leadership, the FBI has infiltrated peace groups and raided the homes of peace activists.  It has set up and entrapped in terrorism charges people whose training and motivation came largely or even entirely from the FBI.  He has supported the re-authorization of the PATRIOT Act, which strips away Americans’ civil liberties.

President Obama, in direct violation of the Nuremberg Charter, a U.S. treaty commitment, has publicly instructed his Attorney General not to prosecute individuals responsible for crimes, including torture.  His administration has worked hard to provide retroactive immunity to corporations engaged in warrantless spying and individuals engaged in sanctioning torture.  He has kept secret a vast trove of documents, photos, and videos pertaining to prisoner abuse.  He has advanced unprecedented claims of secrecy powers in defending the crimes of his predecessor. President Obama’s White House has put great pressure on European states not to investigate or prosecute U.S. war crimes.

This president has restricted the release of the names of White House visitors and has pursued the prosecution and punishment of government whistleblowers more aggressively than any previous president.  His administration is responsible for the cruel and unusual lengthy confinement in a 6′ by 12′ cell, prior to any trial, of alleged whistleblower Bradley Manning.  His vice president, Joe Biden, has publicly labeled an Australian journalist, Julian Assange, a “terrorist.”  President Obama has used a private propaganda firm that had been exposed planting lies in Iraqi media, to screen potential embedded reporters for coverage of the U.S. military. He has used the military to restrict reporting by American journalists on an oil spill in American waters.

Perhaps most perilously, President Obama has claimed the right to engage in many of these activities without the authorization of Congress.  He has even claimed the power first developed by his predecessor to rewrite new laws through the extra-Constitutional use of presidential signing statements.  Expanded powers that are not opposed now will be far more difficult to oppose later with another president able to claim past precedent.

The President’s own deficit commission recommended cuts of $100 billion to the military budget.  The United States spends about $1 trillion each year on the military, through a variety of departments, and has spent over $1 trillion already on the wars on Iraq and Afghanistan.  Over half of every U.S. dollar of income tax is going to war making.  The Department of Defense budget alone is larger than the military expenditures of the next largest 16 militaries in the world combined.  That budget could be cut by 85% and still be the largest in the world.  In addition to the lessening of hostility toward our country that would result from a significant decrease in U.S. military presence around the world, by shifting our financial resources we could create jobs, green energy, top quality free education, public transportation and infrastructure.  We could also end all talk of reducing our Social Security or health coverage.  We intend to support public servants who put our money where it serves the public.

We are not concerned with whether President Obama is acting enthusiastically or reluctantly in pursuing a militaristic policy abroad and more repression of dissent at home.  It matters little whether he is submitting to powerful forces or freely following his preferred course.  We do not elect his soldiers or spies, his advisors, his campaign funders, or the owners of our major media outlets.  We elect the president.  We will not support his nomination for another term, and we believe that a large proportion of Americans who voted for him in 2008 will not do so again unless he reverses the most egregious policies to which we have referred — especially by taking decisive steps to end the war on Afghanistan and to make deep cuts in the military and war budgets.

Some of those who have signed:

*for identification purposes only