Only a criminal regime could allow such criminal acts to dominate and terrorize innocent people with impunity.

By Dr. Ashraf Ezzat / from Alexandria, Egypt for Veterans today

“I talk to you during critical times that are testing Egypt and its people which could sweep them into the unknown.

“The country is passing through difficult times and tough experiences which began with noble youths and citizens who have practiced their rights to peaceful demonstrations and protests, expressing their concerns and aspirations but they were quickly exploited by those who sought to spread chaos and violence, confrontation and to violate the constitutional legitimacy and to attack it”

“Those protests were transformed from a noble and civilized phenomenon of practicing freedom of expression to unfortunate clashes, mobilized and controlled by political forces that wanted to escalate and worsen the situation”

.. Those were the opening lines of President Mubarak’s speech to the Egyptian people on Tuesday night … but the unfortunate clashes he mentioned in the speech hadn’t taken place until Wednesday noon. That leaves us with two options; either the president enjoys a clear and rare foresight or he had already known that this was going to happen

I believe that this speech has been written to President Mubarak to be delivered – and according to plan- after the clashes had occurred between the masses of peaceful demonstrators and the so called pro- Mubarak protesters in the Tahrir square in the capitol Cairo.

But because the drama of the Egyptian uprising is unfolding in a never accustomed to- pace for the Egyptian regime blunders were inevitable. The regime has actually made quite a few since this uprising started like the deliberate and shameful security absence across the country and the suspicious jail breaks but what the whole world witnessed on Wednesday morning in Tahrir – liberty- square is really unimaginable.

Throughout the last week anti-Mubarak protesters have been demonstrating peacefully on daily basis in Tahrir square. And on Tuesday when their numbers have exceeded one million protesters and despite the prior fear of loss of control over the crowds the whole day went by smoothly and with a displayed sense of jubilation and solidarity.

Seeing is believing, what everybody has been following on TV during the last week reflected a genuine and spontaneous grassroots movement that was making a strong and obvious statement in the most admirable and peaceful way.

But what we saw on Wednesday morning, thugs riding horses and camels holding whips and waving samurai swords storming into the peaceful crowds in what seemed like the most obnoxious and vulgar display of terrorizing people is by no means something that any average Egyptian could easily identify as another government orchestrated raid by the Egyptian police militia of thugs.

I hate to elaborate on this ugly incident but I’m afraid there is more to it than just the 7 killed and 800 wounded innocent protesters. what the whole world witnessed taking place was not just mere clashes between protesters, it was the brutal force of the regime stepping in -and in disguise- to terrorize and humiliate the protesters,  it was a demonstration of how dictatorships reacted to opposition, it was the ultimate display of disrespect for human rights, it showed to the whole world what the protests fell short to express, it showed how the regime looked  down at the people of Egypt, it showed how dispensable the man on the street was in the eyes of the regime.

I’m not talking about the violence that took place; rather I’m talking about who allowed this violence to erupt in the first place and even more who is to benefit from it? Who facilitated and organized the transport, the supplying of weaponry and the admittance to the heart of the square.

But most importantly where are the security forces in that entire chaotic situation? Where is the government? Where is the army? Why hasn’t any one stopped these criminal and violent accidents? Why are they being allowed to take place and proceed under the disgraceful surveillance of all around -the square military forces?

Militias of thugs deployed by Mubarak’s regime are already erupting violence in many cities around Egypt. I wonder what happened to the emergency law implemented in Egypt or is this not an emergency according to all the men of the president in the interior and military ministry.

Only a criminal regime could allow such criminal acts to dominate and terrorize innocent people with impunity.

It is becoming obvious now that all parties involved or affected by this uprising are buying more time to sort out their private agendas in an attempt to come out of this without losing much.

The American administration wants to make sure that whoever succeeds Mubarak would follow his steps in regard to the interests of the United States and on top of which come the assurances that the peace agreement with Israel would be respected and that the options for any Islamists rising to power would be limited to the minimum in Egypt. In this sense the American administration might have approved or turned a blind eye to the criminal counter attack of Mubarak’s loyalists. 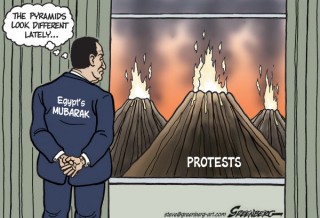 The Mubarak regime is also buying time to wear down a nation on the verge of widespread violence that this regime has been inciting with the help of traitors and conspirators of the interior ministry and the ruling party.

The only party who wants to see this dilemma come to an end is the average Egyptian who doesn’t have the luxury of buying more time … or bread for that matter.

Most revolts are finally settled not by the crowds but by the words coming out of those who are controlling the security and military power in the country.

In the case of the Egyptian revolt, the crowds have been let down by conspirator security and impotent military men whom are obviously still siding with the president.

Any military unit could have easily controlled these ugly riots that are still taking place -which are being reported to the whole world to see- and prevent it from spreading across Egypt and save the country before the advent of another Friday of rage.

Isn’t there anyone with a patriotic conscience to issue such an order and save Egypt from an impending disaster?

Aren`t there any patriotic men left in the world, or are they outbraved and outnumbered by all the president’s men?

For more articles by Dr. Ashraf Ezzat visit his website:http://ashraf62.wordpress.com/