The five American plaintiffs, two of whom are dual citizens of the US and Israel, seek $5 million in damages over the book (which is being sold for less than $10 on Amazon) on the basis that its criticisms of Israel violated consumer protection safeguards. 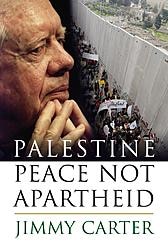 WASHINGTON – Former President Jimmy Carter has become the target of a class action lawsuit over ostensibly mean things he said about Israel in his best-selling 2006 book, Palestine: Peace Not Apartheid.

The lawsuit, filed in New York by an Israeli firm, alleges that the book “contained numerous false and knowingly misleading statements intended to promote the author’s agenda of anti-Israel propaganda and to deceive the reading public instead of presenting accurate information as advertised.”

The five American plaintiffs, two of whom are dual citizens of the US and Israel, seek $5 million in damages over the book (which is being sold for less than $10 on Amazon) on the basis that its criticisms of Israel violated consumer protection safeguards.

The plaintiffs alleged in a press release that the 39th US president and Nobel Peace Prize winner “violated the law and, thus, harmed those who purchased the book” by unfairly “attacking Israel.”

Attorney Nitsana Darshan-Leitner said her clients’ lawsuit “will expose all the falsehoods and misrepresentations in Carter’s book and prove that his hatred of Israel has led him to commit this fraud on the public.”

Publishing company Simon & Schuster, which is also targeted in the lawsuit, dismissed it as a frivolous act and a “chilling attack on free speech that we intend to defend vigorously.”

“This lawsuit is frivolous, without merit, and is a transparent attempt by the plaintiffs, despite their contentions, to punish the author, a Nobel Peace prize winner and world-renowned statesmen, and his publisher, for writing and publishing a book with which the plaintiffs simply disagree,” Simon & Schuster spokesman Adam Rothberg told the Washington Post.

A copy of the complaint can be viewed here.