As funny as it may sound, Harry’s Place  —  the infamous Israeli propaganda website and Neocon outlet that rushed to advocate Blair’s criminal wars — is now desperately insisting on mounting pressure on venues to stop me from spreading the necessary message about Israel and its lobbies.
Harry’s Place — The Zionist mouthpiece website that has managed to collate no less than 157 entries on anti racist watchdog Islamophobia Watch ﻿ — blames me for being a racist. It is almost amusing.

I have now managed to get my hands on the document the Harry’s Place Hasbara website is spreading about me.

The PDF document can be found here.
I do believe that no one can do a better job exposing Zionist morbidity than Zionists themselves. With a clear intention to mislead, the Zionist outlet puts words in my mouth. For instance, Harry’s Place attributes the following meanings to me:

“Jews were responsible for their persecution by the Nazis”
“Jews try to control the world, as predicted by the Protocols of the Elders of Zion”
“Jews are inhuman and they are destroying the planet “
“Jews caused the Credit Crunch”

Clearly, these are neither my words nor my thoughts. These words have never appeared in any of my texts.
In my entire body of work — I have never criticised Jews as a people or as a race. When I do refer to Jews who are complicit in war crimes, atrocities or fraud — I always specify their names, and I indicate their exact role within the Zionist Jewish ideological spectrum . I never blame Jews collectively.

I do however, criticise Jewish ideology and culture, and I contend that we are all entitled to do so.
Hence, I am left wondering: why do Zionist activists lie about me? Why do they put words in my mouth? Indeed, if I am as bad as they suggest I am, why don’t they just let my own words resonate?  Shouldn’t they just let my true words and convictions ‘bring me down?’

Here are my own words read by David Aarovitch, the Israeli Hasbara author  and a pro war enthusiast:

I guess that by now, they know that my own words are there to convey the devastating truth about Jewish nationalism, culture and ideology.

Last week I was scheduled by the Birmingham University Palestine Society to give a talk at the Drum Art Centre, entitled ‘Temporality within Jewish Culture’. Twenty four hours before the event, a Zionist campaign against me was launched with an email signed from Harry’s Place, which I add here:

From: habibi [mailto:[email protected]]
Sent: 23 February 2011 14:07
I see The Drum will be hosting Gilad Atzmon tomorrow evening.
The attached pdf provides a small sample of the man’s utterly reprehensible anti-Semitic views.
Why are you hosting a racist meeting?
Harry’s Place
http://www.hurryupharry.org

In the last decade Zionist smear activists have earned themselves a notorious reputation in Britain — they are not blindly trusted anymore — and for a good reason. Indeed, on reading the accusatory email, the programmers at The Drum venue in Birmingham noticed immediately that the Harry’s Place PDF had attributed to my words a new, and very misleading meaning.

Mukhtar Dar, the Director of Arts at the Drum, responded to the Hasbara campaigners, and dismantled their venomous smear. Here are just a few lines from his email response to Harry’s Place :

“Dear …….
We have taken seriously the allegations you have made against him (Atzmon) and after careful consideration cannot see any reason for us not to host his concert. The Drum is the UK’s premier Black-led arts centre and as a secular venue we respect all faiths and are committed to social justice, equality and freedom of expression… Growing up as a Jewish boy in Israel, he (Atzmon) was influenced by the foreign melodies and time signatures of Arabic music. The fusion in his latest albums of European, American, Jewish and Arabic styles demonstrates this mixed cultural heritage in easily accessible, musical terms. This shows that he is not a racist; he opposes racism in favour of the hybrid and the post-colonial. His views on Palestine have been outlined in forums such as The Guardian, The Observer, the School of Oriental & African Studies, the Cork Jazz Festival, etc – institutions which can scarcely be described as bastions of racism.

Regarding the specific allegations of anti-Semitism, we have looked at his website and other materials such as online clips and newspaper articles, and taken advice from friends of The Drum who are of Jewish background – including Professor Joyce Cannon, professor of Sociology at Birmingham City University, who states that she supports the Drum’s decision to go ahead with the event as planned and does not regard Gilad Atzmon view as being anti-Semitic. While Gilad Atzmon is ideologically an anti-Zionist, this does not make him anti-Semitic; and taking these views into account, we can find no evidence of hate crimes or other illegal incitement in his music or his writings. Our arts programme is based on respect and recognition of worldwide human rights and freedom of expression, and we support people’s democratic right to hold ideological views as long as these do not infringe on the safety and beliefs of other people.
Regards

I really think that Mr. Dar sums it up succinctly for all of us when he states that “we are committed to social justice, equality and freedom of expression.” 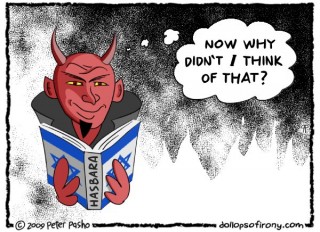 And Harry’s Place too, promotes itself as believing in freedom of expression –It states boldly, at the top of its webpage : “Liberty, if it means anything, is the right to tell people what they don’t want to hear.” Harry’s Place also opposes the Boycott against Israel on the grounds of freedom of speech.

So, if Harry’s Place campaigners had a drop of integrity in them, they should  enthusiastically support my right to express myself — But it seems that integrity and sophistication are not Zionist features.

I would suggest to the Zionist advocates at Harry’s Place that the British law offers many means to tackle any form of racial incitement, and racism in general. Therefore, if Harry’s Place, Jewish anti Zionists, or anyone else for that matter, should find even a single racist idea in my writing or in my public appearances, I recommend that they had better visit their local police station, and issue a formal complaint against me, for in Britain, racists and anti Semites are locked behind bars.

If Zionists are convinced that they have a case against me, they had better just get on with the job.
I can assure them that if they succeeded, they could probably silence me forever.

I wish them luck — being one of the busiest artists in Europe, I could do with some time off.