First let me say that being right does no good if no one listens. Too many years ago, I noticed a difference between civilian survivors and participants. By that I mean, law enforcement and military personnel. There is one kind of PTSD survivors experience after a crime, natural disaster, accidents and abuse but there is another type when people are part of the traumatic event itself. Then there is the type after violence was used in response coupled with the constant threat of more events. 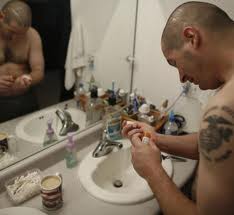 Cops don’t face daily traumatic events but they know each day they leave their house, they may not come back home. For deployed servicemen and women, during their entire deployment, they also know it could be their last day, just as they try to cope with what happened the day before and the day before that. Even back home they have to constant threat of redeployment hanging over their heads. This is also true for Reservists and National Guards. There is no real down time for them.

We can understand someone changing after a horrible accident. Even if there were no other times, we can still understand the fear they have whenever they get into a car. We can understand fear and panic striking when hurricane season rolls around or tornados are reported in the area even if the person has only been in harms way once. We can understand a firefighter after one too many deaths especially involving children. People can change after one event in their lives as survivors. They change even more when they are part of the event itself.

In 2003, having waited 15 years in the Rhode Island National Guard for the opportunity to deploy overseas, Vinnie Scirocco deployed for Iraq and trained at a base. Three months later, without seeing combat, Scirocco was physically injured and given honorable discharge. “I didn’t feel like I completed my mission,” said Scirocco, now the State Commander of the Veterans of Foreign Wars (VFW). “To the day I die I will probably always feel that way. No pill, no conversation with anyone at any educational level can change that.”

After six years of road rage and constant guilt Scirocco checked himself into the Veteran’s Affairs Hospital in Providence and was diagnosed with Post-Traumatic Stress Disorder (PTSD).

A childhood friend of Scirocco’s, who was deployed at the same time and remained in Iraq, developed Post-Traumatic Stress Disorder (PTSD) shortly after Vinnie’s discharge, after shooting and killing a baby girl. He was a gunner on a Humvee that patrolled the streets of Baghdad, where civilian vehicles are not allowed to pass military vehicles. A family desperately trying to get to the hospital chanced it and passed the Humvee. Scirocco explained the aftermath: “So he shot at the car. What you hope to do is shoot in between the husband and the wife. You didn’t want to shoot at anybody. Well, there was a little girl in the backseat who got shot and killed. This friend of mine, he’s a father. He’ll never be the same—no matter how many times I tell him, ‘It’s not your fault; you had to do that,’ he’ll always feel guilty for that—he can’t take that bullet back.”

Both Scirocco and his friend undergo therapy and take medication for PTSD. They’re both saddled with a heavy, inextinguishable guilt. But one of them never saw action, while the other did. The problem with diagnosing PTSD when no identifiable trauma has occurred is not necessarily that veterans will be getting benefits they don’t deserve, but that the misdiagnosis can lead to a dangerous reliance on prescription drugs, or an overestimation of one’s own mental health problems.

The condition’s implied emphasis on outside trauma rather than manufactured neurosis has done much to de-stigmatize mental illness among soldiers. And the more PTSD is destigmatized in the ranks of the armed services, the argument goes, the more active soldiers and veterans will feel comfortable seeking psychiatric help.

And then the Army suicide rate—which this year surpassed the civilian one for the first time—might start decreasing. But PTSD diagnoses may overemphasize trauma and de-emphasize soldiers’ own understanding of duty, patriotism, and camaraderie. A study of four Rhode Island veterans reveals that guilt over not serving was equally responsible for fragile mental health as trauma sustained while in battle.

A few years ago, a young Iraq veteran was haunted by a similar event. He just couldn’t stop reliving the day he also had to shoot at a car with a family in it. The resulting deaths were the only thing he could remember about that horrible day. What he forgot was what he tried to do to prevent it. He threw rocks at the car. He shot warning shots into the air. He screamed at them. The car just kept coming. Knowing how many troops had been killed by suicide car bombers, he was worried about the men he was with and it was his job to protect them. He opened fire. When he discovered it was a family, he didn’t think he could survive that kind of pain inside of himself.

I reminded him about what happened before that image of the dead family and had him watch the “whole movie” in his mind. From that moment on, he remembered that he was not evil, did not intend to do it and forgave himself.

That one nightmare stopped haunting him but there were many more he had to face. They all do. Deaths of civilians or even young combatants, of friends and even the death of their faith when they wonder where God was or how a loving God could allow such horror on top of the threats to their own lives is not easy to overcome. Some, two out of three, will walk away with the memories but are not haunted by them. They are however forever changed by the event. No one wakes up the day after trauma the same way they were before it.

For the veterans with PTSD, they were able to feel things more deeply than others so they walk away with the pain from others on top of their own pain. It cuts deeper into their soul and begins to eat away their character.

Allowing them to just numb the pain with drugs, legal or otherwise, does not heal them. It just masks the symptoms. These drugs were supposed to be about getting the chemicals of the brain level again so that therapy can begin but lately reports have come out that psychiatrists are doing drug appointments every 15 minutes instead of doing any kind of talk therapy. If they are allowed to just go on feeling they are evil or crazy, then they do not heal. They need to be heard without judgment so they can feel as if they are closer to normal again.

California-based researcher Dr. Paula Caplan argues that no veterans at all should be diagnosed with PTSD, suggesting more precise terms like “battle fatigue” and “shell shock” for dealing with mental battle scars. Caplan, who has a forthcoming book on the misdiagnosis of PTSD among veterans, argues that the PTSD label “pathologizes” and further stigmatizes veterans’ mental problems, which she says are a normal reaction to war. “We should never say that because somebody is traumatized by war [they have PTSD],” Caplan says. “We shouldn’t use that term. We should say they are traumatized by war.”

Caplan thinks the only way to rehabilitate veterans is through routine engagements with civilians, especially those willing to listen and talk.

When they feel as is no one would understand them, all the emotions are trapped inside of the walls they build. Once they begin to talk, the wall begins to come down and tears are released. Some cry so hard they think they are getting worse instead of knowing all the emotions coming out were inside of them all along. All they would allow themselves to feel was anger and being unforgiven. With feeling safe to open up, they release all that is bad so they can see what was good still in them. For civilians, they walk away from traumatic events either believing God spared them or God sent the trauma to them. One event as victim/survivor vs multiple events as an active part of the event itself. There is a difference and it needs to be treated differently.