I dedicate The New Hiroshima to Dr. David Ray Griffin, who saw the big picture and described it to me. Matthew, 13:57.

“You never want a serious crisis to go to waste, and what I mean by that is an opportunity to do things that you didn’t think you could do before.” — Chicago Mayor Rahm Emanuel 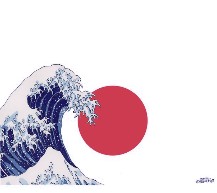 HOUSTON, 3/14/11 — On Feb. 25 VT published my article The False Flag Space Shuttle, which was based on my observation of a NASA Star Wars weaponry demonstration. That awe-inspiring event occurred on 7/28/05, in the skies high above Texas City. Since the space shuttle Discovery had been the probable culprit in the Texas City event, and since the same Discovery was flying again, I made what many considered an outlandish statement:

‘At this juncture in Obama’s plan, he could really use yet another “terrible tragedy”, the presidential panacea that has been abundantly available since 9/11. Just consider the space shuttle now circling the world to be a star-wars syringe for administering more terror stimulant to our addicted body politic.’

A strange cluster of events occurred in the last two days of Discovery’s mission. Taken together they suggest that NASA’s favorite Star Wars spaceship had been emitting or focusing tremendous energy into the Pacific Ocean, as I had seen it do over the Gulf of Mexico in 2005:

“There is an unnatural amount of cold, rain, floods, snow and tornadoes. The government’s High Frequency Active Auroral Research Program (HAARP) has been used extensively for the past few years to destroy or damage property, forcing victims to borrow from banksters to repair or replace it. The extended cold season that we are having in California made farmers miss their first planting of what is normally a three-season growing period, which will cause food shortages. The unusually long Midwest winter is preventing the snow from melting, which will cause springtime flooding throughout the Mississippi Valley, and means more trouble for farmers.”

Captain Spooner and I weren’t being creative with our caveats. Although only one person in a thousand knows about it, there has been high-level official acknowledgment of geo-war for 14 years:

“Others are engaging even in an eco-type of terrorism whereby they can alter the climate, set off earthquakes, volcanoes remotely through the use of electromagnetic waves. So there are plenty of ingenious minds out there that are at work finding ways in which they can wreak terror upon other nations. — Secretary of Defense William Cohen, 1997

“Whether earthquakes are tied to global warming, or to … HAARP, which some scientists say is utilized by the military to drastically alter weather patterns …, the increased number (of earthquakes is) worthy of concern and of additional study.” — Earthquakes: Global Warming or HAARP?

Alas Japan,  which had been designated for destruction, and delivered to death.

“Texas has just proclaimed the capture of a Saudi student who, they say, meant to attack nuclear powder plants.All of this makes me suspect that Discovery has a combat mission against us earthbound sitting ducks. The most likely targets are U.S. evacuees from Libya, nuclear power plants and Ron Paul’s district.” — The False Flag Space Shuttle

Leave a Reply to Anonymous