Home Government LAWRENCE DAVIDSON : Washington and the Civilians of Libya – An Analysis

There is, of course, no arguing with the principle put forth. The protection of civilians in times of warfare, a moral good in itself, is a requirement of international law. 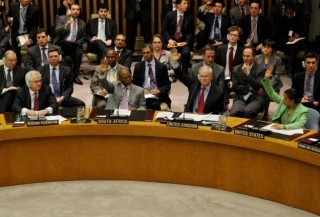 Whether you believe that the United Nations resolution authorizing extensive intervention in the Libyan civil war is justified or not, and whether you believe that the admittedly eccentric forty two year rule of Muammar Gadhafi over a complex and fractious tribal society has been cruel or not, there is one thing that all objective observers should be able to agree on. All should agree that the rationale put forth by the United States government for supporting the impending NATO intervention, that this action is to be taken to bring about an immediate end to attacks on civilians, is one of the biggest acts of hypocrisy in a modern era ridden with hypocrisy.

There is, of course, no arguing with the principle put forth. The protection of civilians in times of warfare, a moral good in itself, is a requirement of international law. Yet it is a requirement that is almost always ignored. And no great power has ignored it more than the United States. In Iraq the civilian death count due to the American invasion may well have approached one million. In Afghanistan, again directly due to the war initiated by U.S. intervention, civilian deaths between 2007 and 2010 are estimated at about 10,000. In Vietnam, United States military intervention managed to reduce the civilian population by about two million.

And then there is United States protection of the Israeli process of ethnic cleansing in Palestine. America’s hypocrisy as Washington consistently does nothing about the Israeli blockade of Gaza and the slow reduction of a million and half Gazans to poverty and malnutrition. And, finally, the unforgettable hypocrisy inherent in U.S. support for the 2009 Israeli invasion of that tiny and crowded enclave. The 2009 invasion was the most striking example of an outright attack on civilians and civilian infrastructure since the World War II. And the American government supported every single moment of it.

Thus, when President Obama gets up before the TV cameras and tells us that Libyan civilians have to be protected, when UN ambassador Susan Rice tells us that the aim of the UN resolution is to safeguard Libya’s civilian population and bring those who attack civilians, including Gadhafi, before the International Criminal Court, a certain sense of nausea starts to gather in the pit of one’s stomach. If Washington wants regime change in Libya, which is almost certainly the case, government spokespersons ought to just say it and spare us all a feeling of spiritual despair worthy of Soren Kieregaard!

It was Oscar Wilde who once said that “the true hypocrite is the one who ceases to perceive his deception, the one who lies with sincerity.” I think that politicians learn, some easier than others, to live their lives like this. And, as I have said before, the only way they can be successful in sharing their delusions with the rest of us is that the majority do not have the contextual knowledge to analyze and make accurate judgments on their utterances. The successful hypocrite and his or her ignorant audience go hand in hand.

ABOUT THE AUTHOR: Davidson is the co-author of A Concise History of the Middle East and author of America’s Palestine: Popular and Official Perceptions from Balfour to Israeli Statehood; Islamic Fundamentalism; and The Alexian Brothers: An Evolutionary Look at the Monastery and Modern Health Care. A member of West Chester University’s history faculty since 1986, he earned his bachelor’s degree from Rutgers University and completed his master’s and Ph.D. degrees from Georgetown University and the University of Alberta in Canada, respectively.