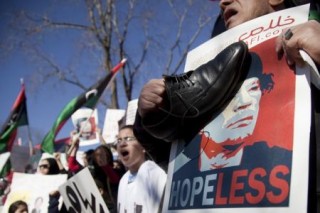 Telephone and internet communications with Libya have been cut off by Libyan dictator Mu’ammar Gaddafi.

However, I have been able to contact a very important person in the Libyan state apparatus using a satellite phone to ascertain the truths regarding Libyan state TV’s reports of civilian casualties resulting from Western air and missile strikes.

He says that these reports of civilian casualties are a complete lie.

My contact says that the Gaddafi regime has brought together a combination of victims of road traffic accidents (of which there are about 10,000 in Libya annually) and victims of his own forces’ brutal suppression of protests in the Tajoura suburb of Tripoli (more than 300) for display to the cameras, claiming that they are victims of the NATO air and missile strikes.

My contact further says the people outside Gaddafi’s compound and in Tripoli’s Green Square consist 100 per cent of the following:

(1) Revolutionary Committee members (thugs and hoodlums) who have been instructed to bring their families with them;

(2) Members of Al-Amn al-Dakhili (the internal security organization) and their families – there are 25,000 of these. They include such nasty creatures as the Special Rape Squad (yes, it’s a job title written on their Security Services ID cards) whose job is to rape political prisoners, men and women.

My contact also says  that, as you would imagine, (1) and (2) above are not happy to bring family members with them but are doing so under duress.

Also, Gaddafi since 17 March has locked up all but two of his ministers in with him in Bab al-Aziziya compound to prevent them from defecting.

Finally, many of (1) and (2) above have blood on their hands and are implicated in a host of ghastly crimes. Many of their  identities are known to their victims’ families: they know that when Gaddafi goes down they will go down with him, so they have nothing to lose.