2. Va. doctor in malpractice suit has long disciplinary record.  The Virginian-Pilot  She filed the lawsuit in federal court after an administrative claim for compensation was denied by the US Department of Veterans Affairs. The medical center has denied the allegations in court papers. No trial date has been set. …

3. Klobuchar to introduce legislation to assist victims of sexual trauma. Coon Rapids ECM Publishers  “Military sexual trauma” is the phrase that the US Department of Veterans Affairs uses to refer to sexual assault or repeated, threatening sexual harassment that occurred while a veteran was in the military.

4. Local vet trying to revive DAV chapter.  Times-Georgian  After the US Department of Veterans Affairs awarded him a disability benefit, he applied to become a member of the DAV and soon learned of the local chapter’s situation. “In talking with state DAV representatives, I found out that the nearest chapter …

5. Man’s long fight against Guidant finally lands in the open.  Minneapolis Star Tribune…His case alleges that more than 19000 fraudulent claims were filed after April 2002 with both Medicare and the US Department of Veterans Affairs costing the programs — and taxpayers — about $726 million. He claims Guidant made changes to the…

6. Veterans Affairs to announce new clinic developer.  StarNewsOnline.com  By Shelby Sebens The US Department of Veterans Affairs is expected to announce a new developer for the planned Wilmington veterans clinic in the next couple of weeks. Construction of the community-based outpatient clinic could start within six months

7. Unmarked Civil War Soldier’s Grave to receive a Headstone at Artesia Cemetery.  Los Cerritos News  Through the efforts of Margaret Alley of the United Daughters of the Confederacy, assisted by Floyd Farrar of the Sons of Union Veterans of the Civil War, the cemetery has received a headstone from the Department of Veteran’s Affairs. …

9. NATO to command no-fly zone, but U.S. retaining control of airstrikes.  The United States has already turned over responsibility for enforcing an arms embargo against Libyan leader Moammar Gadhafi to NATO, and will soon hand off policing of the no-fly zone, the Pentagon announced Friday.

10. VA enlists harsh critics as it belatedly embraces the Web.  Alex Horton started his blog, “Army of Dude,” as a young enlisted infantryman in Iraq from 2006 to 2007. It was one soldier’s view of war, graphic and often critical, penned at first for an audience of friends and family. 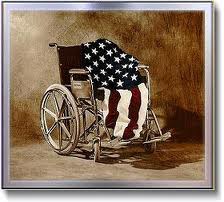 Registration is still open for the 31st National Veterans Wheelchair Games, the largest annual wheelchair sports event in the world. Presented by the Department of Veterans Affairs and Paralyzed Veterans of America, the Games are open to Veterans who use wheelchairs for sports competition due to spinal cord injuries, amputations or certain neurological problems and who receive care at any VA medical facility. Co-hosted this year by the VA Pittsburgh Healthcare System and the Keystone Chapter of the Paralyzed Veterans of America, the 2011 Games will be held August 1-6 and include competitions in 17 different events such as swimming, basketball, table tennis, archery, and wheelchair slalom, which is a timed obstacle course. This year’s Games mark the second time that Pittsburgh has hosted this event, as they were previously held in Pittsburgh in 1998. If you know a Veteran who would benefit from this rehabilitative event tell them to visit www.wheelchairgames.va.gov