Home Government America: The Party is Over! Here’s Why

We Americans have enjoyed an incredibly wonderful standard of living over the past three decades with most of us believing that it was because we are the world’s wealthiest, most prosperous nation with economic and financial systems that are second to none – but that is not even close to accurate. [The truth of the matter is that] we are [actually] in the biggest debt bubble the world has ever seen! It has been the greatest party in the history of the world, but it is time to turn out the lights because the party is over. [Let me explain.] Words: 1518

So says  theeconomiccollapseblog.com in an article* which Lorimer Wilson, editor of www.munKNEE.com, has further edited ([  ]), abridged (…) and reformatted below for the sake of clarity and brevity to ensure a fast and easy read. (Please note that this paragraph must be included in any article re-posting to avoid copyright infringement.) The article goes on to say:

The reason why we have had an almost unbelievably high standard of living over the past three decades is because we have piled up the biggest mountains of debt in the history of the world.  Once upon a time the United States was the wealthiest country on the planet, but all of that prosperity was not good enough for us… we started borrowing and borrowing and borrowing and we have now been living beyond our means for so long that we consider it to be completely normal. [Nothing could be further from the truth!] 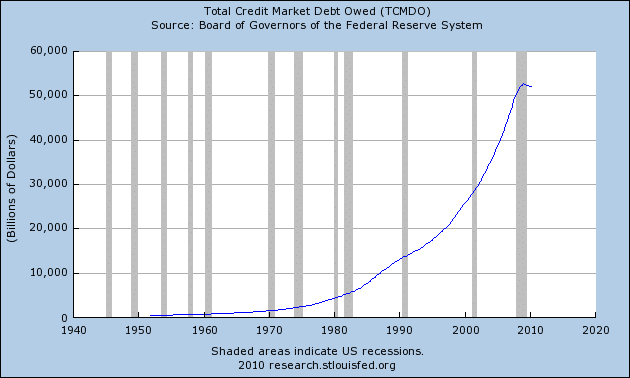 How Can We Correct the Debt Problem?

The truth is that there is not an easy answer under our current system.  The only way that the U.S. economy continues to “grow” is if the debt bubble continues to “expand”. If our leaders allowed the debt bubble to “pop” and the U.S. economy went into a deleveraging cycle, it would mean that we would start living far below our means for an extended period of time and it would spawn a deflationary depression that would make the Great Depression look like a Sunday picnic. Most Americans are in no mood to take that kind of hard medicine.

Do you really think that the American people are going to vote in politicians who tell them that it is time to live below our means and that we are going to have to experience a standard of living far below what our parents experienced in order to pay for all the debt that they racked up? No, that is clearly a dog that isn’t going to hunt. The American people want to hear that better times are ahead.

To read more of this article please go here.