Home Government What’s In It for Us, Mr. Obama?

It is difficult to see what the American interest is in offering a congressional bully pulpit to a man like Netanyahu who has clearly condoned war crimes and it would seem pointless to listen to yet another Israeli attempt to prevaricate and, let’s face it, lie.

Apologists for Israel sometimes argue that critics of that nation hold the government in Tel Aviv up to an impossibly high standard, that many condemn Israelis for doing things that other countries in the world also do routinely.  That argument has a certain persuasiveness in that Bahrain’s Sunni rulers treat the country’s Shi’a majority just as badly as Israeli Jews treat Palestinian Arabs, but it misses the point.  How Israel treats its own minority citizens, Gazans, and residents of the West Bank, and its neighbors might be significant from a humanitarian point of view, but it is not a vital interest of the United States.  That Washington has become a victim of the internal politics of the Middle East is largely due to manipulation by Israel and its lobby, which has turned all Americans into enablers of Israeli policies, no matter how short-sighted or ill-conceived.  It is the US national interest that has been sacrificed in the process.  That is the point.

For those who would argue that such a view of the US interest versus that of Israel is simplistic, I would point out three developments over the past several weeks that together make the case that Israel has extraordinary ability to manipulate Washington.  First would be the budget debate, in which Republicans united to call for deep cuts in the proposed federal budget before settling for less than one tenth of one percent.  Senator Rand Paul had courageously raised the possibility of ending all foreign aid, including to Israel, but generally speaking any reduction in assistance at the current $3 billion plus level was off the table.  Several congressmen, including Ileana Ros-Lehtinen, chairman of the House Foreign Affairs committee, and House Majority Leader Eric Cantor explicitly stated their opposition to any reduction in aid to Israel.  But the real surprise came in the final spending bill.  Israel not only was not cut in its assistance level, it received $205 million in additional funding for its Iron Dome defensive missile development, which competes with US defense firm Raytheon’s Patriot system. 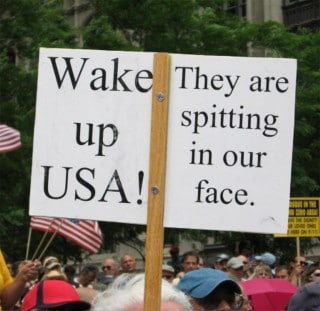 That billions of US taxpayer dollars are going to Israel at a time when programs like Medicare and Social Security are facing cuts is absolutely indefensible.  That Congress would be so tone deaf as to vote more money for Israel when domestic programs are being slashed is symptomatic of the hold that the Lobby has over the US government.  Israel does not need money from the United States.  It has a strong economy and in per capita income it ranks at the same level as Great Britain.  Its citizens receive free medical care and education through university level.  It has received generous trade and co-production concessions from Congress that some claim amount to $10 billion a year in aggregate national income while its own markets are difficult for US companies to penetrate.  The only explanation for Israel’s being showered with American taxpayer largesse is that the Lobby wants it to be so, to provide a tangible sign of America’s unflinching support.

A second indication of Israel’s control over Congress even when it is not in the US national interest is the issuance of frequent resolutions by both the House and Senate in support of every move taken by Israel.  Ever since the United Nations’ Goldstone Report was released, detailing Israeli war crimes in its Cast Lead invasion of Gaza in January 2009, there have been efforts to delegitimize the report’s findings.  Normally, the US is able to block any investigation into Israeli missteps, as it successfully did when Lebanon was bombed and invaded in 2006, an event that Secretary of State Condoleezza Rice described as “birth pangs of a new Middle East,” but the devastation of UN sponsored relief facilities and schools resulting from Cast Lead was such that an international investigation could not be avoided.

The Obama Administration has persistently questioned the Goldstone Report’s conclusions, the media has largely ignored the crimes against civilians that it describes, and Congress has been working hard to put pressure on the United Nations to rescind the report in its entirety.  The objective of Israel’s friends is to protect its government and defense forces from any accountability for the deaths of 1,400 Palestinians, most of whom were civilians and many of whom were children.  Israel’s independent investigation into possible war crimes committed by its soldiers has been essentially bogus, with only one soldier receiving seven months in jail for fraudulently using a stolen credit card.

The strenuous efforts by the United States government to shield Israel make all Americans complicit in a cover-up of war crimes, which is precisely how the rest of the world sees it.  Senate Resolution 138, which passed by a unanimous consent vote on April 14th, called on the United Nations to rescind the Goldstone Report, demanded that the UN Human Rights Council be reformed so that it will stop criticizing Israel, and urged the White House to take the lead to “limit the damage that this libelous report has caused to our close ally Israel…”  But it did not have any teeth in terms of compelling a UN response.

That failure has been addressed by the House of Representatives.  The Foreign Affairs Committee of the House is currently considering a bill, HR 1501, “To withhold United States contributions to the United Nations until the United Nations formally retracts” the Goldstone Report.  As the committee is headed by Congresswoman Ileana Ros-Lehtinen, a passionate supporter of Israel, it is certain that the bill will go to the full House for approval, where it will likely pass overwhelmingly.  However one feels about the United Nations in general, it is difficult to understate what this bill will do to America’s standing vis-à-vis a number of international bodies.  There is no possible explanation for this bill but to protect Israel from any and all legitimate criticism.  As is frequently the case, the United States and its citizens will pay the price in terms of America’s approval rating sinking even lower worldwide.  Defending Israel from criticism does not appear either in the US Constitution or the Bill of Rights and sacrificing American interests for those of a foreign power is just not acceptable, but Congress has long since abandoned any attempt to mandate minimal standards of accountability, either for itself or for the state of Israel.

Finally, there is the invitation by Congress to Israeli Prime Minister Benjamin Netanyahu to address a joint session.  Netanyahu will do so during the American Israel Public Affairs Committee (AIPAC) annual convention at the end of May.  The speech is at the invitation of the new Republican leadership of the House of Representatives, but it is sure to have bipartisan support.  In a widely reported meeting with Netanyahu in November 2010, Eric Cantor, House majority leader, met privately with Bibi Netanyahu and said the Republican Party would serve “as a check on” the Obama Administration over its policies in the Middle East. Then “He made clear that the Republican majority understands the special relationship between Israel and the United States, and that the security of each nation is reliant upon the other.” In other words, Cantor was meeting with the leader of a foreign country and promising to do whatever he could to influence and even subvert the foreign policy of his own country.  Cantor apparently is delivering on his pledge because the timing of the Netanyahu visit and speech is clearly designed to preempt any peace plan offered by the White House that Israel might object to, meaning that Congress is again undercutting on behalf of Israel the prerogative of the president to conduct foreign policy.

It has already leaked that Netanyahu will likely reveal what he calls a new peace plan asserting forcefully that Israel’s security must be guaranteed.  Which means a Palestinian state with no authority to do anything that states normally do, disarmed and not even controlling its own borders or airspace.  It would essentially be the status quo wrapped up as a totally bogus peace agreement and there is no sign that Netanyahu might be willing to abandon his most ardent supporters, 500,000 strong in the settlements built on Palestinian land.

It is difficult to see what the American interest is in offering a congressional bully pulpit to a man like Netanyahu who has clearly condoned war crimes and it would seem pointless to listen to yet another Israeli attempt to prevaricate and, let’s face it, lie.  Conservative columnist Joe Sobran once commented on an earlier Netanyahu speech before Congress back in 1996.  He likened the response to that given to Josef Stalin when addressing the Supreme Soviet, with everyone standing up and applauding wildly because no one dared to be seen as the first to stop clapping.  Hopefully both Ron and Rand Paul and Dennis Kucinich will not bother to applaud at all.

And looking ahead there will be congressional and White House moves to stop the Palestinians from attempting to declare statehood when the UN General Assembly reopens in September, a move that Israel and AIPAC condemn.  Stay tuned.  If there is a genuine American national interest in any of these shenanigans, it completely escapes me as to what it might be, but one has to conclude that there is nothing good for the United States and its citizens in any of this.

Philip Giraldi, a former CIA Officer, is the Executive Director of the Council for the National Interest. His “Deep Background” column appears every month exclusively in The American Conservative.