Home WarZone In Obama –Netanyahu Meeting, Who Is Who? 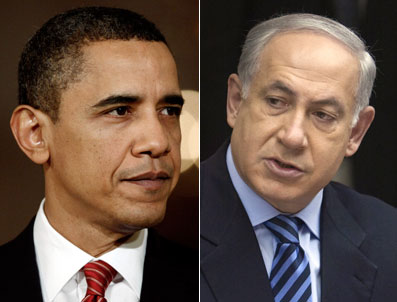 “The old game is over fellows, this is a whole new game now and it is going to be Israel once again, and like it or not, who will set the new rules. And as the United States had annexed Texas back in 1845 Israel simply followed in her footsteps and annexed the West Bank and East Jerusalem, big deal.” says Benjamin Netanyahu.

“At this point and as the ticking seconds seemed like ages for Obama, it was clear that Mr. Netanyahu was slapping Obama in the face in public and for the whole world to see.”

Carried away by his, on the rise, presidential approval rating following his legendary triumph over Osama Bin Laden, the prince of darkness whose image and recorded video-tapes have been made to haunt the American collective psyche as the destroyer of America president Obama thought it was time to indulge himself with some rhetoric about the Middle East’s chronic crisis and it’s so called peace process.

I cannot blame the man for obviously he was basking in the ecstasy of his political victories. I mean with the monstrous Gulf oil spill overcome and now behind him as history, the health care legislation passed and hailed as a big victory, the boys are out of the Iraqi swamp and soon out of the Afghani poppy fields and with the notorious Bin Laden shot in his bed room and given the most dignified burial ceremony before he was dumped in the bottom of the sea, one thing that would make Obama worthy of his controversial Nobel peace prize remained missing and unaddressed, namely the Palestinian- Israeli conflict, The only hot issue on the US foreign policy that defied any sort of promising outlook.

And since he was all geared up for his second term in office, especially after he had easily shoved away that showy billionaire, Trump by exhibiting a small piece of paper and since Sara Palin has been politically self-decaying by the virtue of her God- given clueless mentality Obama thought that with the presidential elections, a process made to believe controlled by the Zionist lobbies, coming next year why not while rolling out the red carpet for Netanyahu, try and appease the pro-Israeli lobbies in America like, AIPAC, J Street, AFSI, ..etc, and announce that the United States stands firm behind ironclad Israeli security alongside a non-militarized and feeble Palestinian state as an acceptable prerequisite for any negotiations with the Palestinians.

In his Middle East speech Obama carefully refrained from mentioning the Palestinian refugee Issue nor did he mention how the East Jerusalem file would be tackled but he came out explicitly and without a flicker of hesitation and declared to the whole world that the United States strongly believes that the future state of Palestine should be based on the pre-1967 lines with mutually agreed land swaps with Israel,… and this is where his luck ran out on him.

With The United States being a member of the diplomatic quartet on the Middle East the Obama statement subsequently meant that this is where also the United Nations, European Union and Russia probably stood on this thorny matter of the Palestinian borders.

Obama’s speech created a buzz on the mainstream media and on the web and certainly made him go to sleep that Thursday night feeling good about himself and thinking what a splendid speech he gave that surely made everyone happy in North Africa and the Middle east. … Well, maybe not the whole Middle East.

Obama thought, may be the Norwegian Nobel prize committee that granted him the Nobel peace prize had been right all along, a committee of that caliber could not be mistaken, they are all men of good judgment and great expertise and he must be that world peace maker they all agreed he is. He must be the one who could get the job done in the Middle East conflict.

That Thursday must have been one of Obama’s lucky days and it could have stayed so hadn’t it been for the following day visit of Benjamin Netanyahu, Prime minister of the state of the chosen people of Israel.

Receiving his esteemed guest in the oval office and after showing cordiality before the cameras and world press Netanyahu put on his iron gloves and began to punch, the unprepared and still ecstatic from last night, Obama where it really hurts.

Netanyahu with his monotonous and metallic voice and with the aid of his body language began to grab every statement Obama has made on the hoped for Israeli-Palestinian agreement and literally tore it apart and threw it into some shredder machine right in front of Obama’s eyes.

Netanyahu declared that while Israel is prepared to make generous compromises for peace, only he didn’t say what those compromises would be, it cannot go back to the 1967 borders because those borders are indefensible.”

Indefensible, a new word in the vocabulary the Zionist machine is bound to utilize in the coming years and may be decades and to be added to the dictionary of Israel’s most popular words such as anti-Semite, Holocaust denier, Israel-hater, Israel’s right to exist, Israel’s right to defend itself, chosen people and of course the promised land.

Netanyahu looked Obama in the eyes; and referring to his worldwide admired Middle East speech told him “A peace based on illusions will crash upon the rocks of Middle Eastern reality” in other words Netanyahu was saying that Obama, the diplomatic Quartet, the Arab league and the Palestinians they all have been deluded and living in a world of fantasy land and it was he who would take upon himself the arduous task of waking them up to the world of reality.

At this point and as the ticking seconds seemed like ages for Obama, it was clear that Mr. Netanyahu was slapping Obama in the face in public and for the whole world to see.

Obama with a look in his eyes that reflected mixed feelings of amazement, bewilderment and subjugation listened intently, his hands cupping his chin and part of his cheek as if he was feeling the pain and the humiliation and at the same time dodging any more slaps across his face.

Now the whole discourse was taking a dramatic change, as Mr. Netanyahu was lecturing Obama and the United States about the new Israeli geo-political realities on the ground, the Palestinian ground that is, or rather the used to be.

“The old game is over fellows, this is a whole new game now and it is going to be Israel once again, and like it or not, who will set the new rules. And as the United States had annexed Texas back in 1845 Israel simply followed in her footsteps and annexed the West Bank and East Jerusalem, big deal. It’s all part of this new game of demographic changes and if America got away with it I can see no reason why we cannot” that was the message Netanyahu was giving and impudently declaring between the lines.

Also between the lines there was a lot more to read than just this slap in the face, UN  resolution 242 and the different interpretation of the Israeli-Palestinian borders issue; there was a clear indication as to who was really pulling the strings in the white house.

This historically awkward moment revealed beyond doubt the true influence Israel and its brigades of Zionist lobbies wield over the white house and the American policy. An old story but this time aired live in a new world edition that will cover, beside the oval office spectacle, the finale scene as Netanyahu speaks triumphantly at the annual policy meeting of AIPAC.

As Obama was hosting Netanyahu In the oval office, the holy of the holies of the American diplomacy, and with the whole world watching, it was not clear which one of them was the real president of the United States and which one was the guest of honor, I mean with this eternal and unbreakable bond between the United States and Israel it has always been kind of hard to tell who is who and which is which.

Clearly that Israeli display of public defiance and contempt for the United States policy and its president raises a lot of comments and questions but on top of which the one question that has been long begging for an answer “is a second term in office, or the first for that matter, worth sacrificing the pride and the interests of the world superpower?”

This hard to die question really needs to be answered, not by Obama but the Americans themselves, for it is one burdening issue that could not be easily terminated, gotten rid of and dumped in the bottom of some sea.