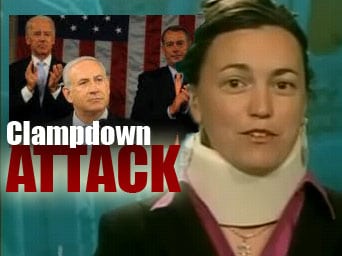 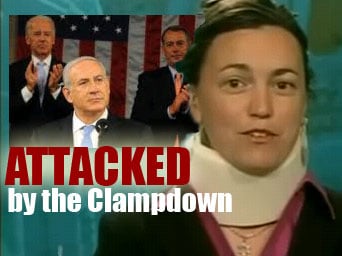 Rae Abileah, a Jewish-American activist disrupted Netanyahu’s speech at the Congress. Standing in the congressional gallery, she was yelling, “No more occupation! Stop Israel war crimes! Equal rights for Palestinians! Occupation is indefensible!”

As she was screaming, members in the audience tackled her to the ground. Undercover  security forces dragged her outside. She was taken to George Washington University Hospital, where she was treated for neck and shoulder injuries. At the hospital, police arrested Abileah and charged her with disorderly conduct for disrupting Congress.

Thanks, Amy, for having me on. Yesterday I stood up and unfurled a banner and spoke the truth about what’s going on in Israel. The war crimes and occupation, oppression and inequality that Palestinians are suffering from must end. And it was absolutely despicable to see our Congress pandering to Netanyahu as if he was the president of the United States. And I think after seeing the speech, every American should be outraged, and the progressive community needs to rise up and take courage and take action for justice, democracy, freedom and equality, in the Middle East as well as here at home. 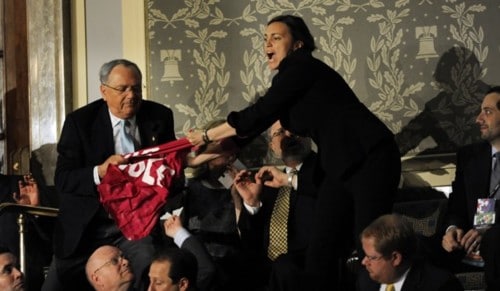 And whether it’s putting our money where our hearts are, by participating in economic pressure against Israel through the Boycott, Divestment and Sanctions movement, or calling our Congress people or taking other actions, it’s time for us to say no to this terrible policy that, just as Dr. Barghouti has illustrated, will not bring about peace. Netanyahu proved yesterday that he is the primary obstacle to peace and justice for Israelis and Palestinians. And to see our Congress giving away three billion of our tax dollars every year to Israeli war crimes, while our economy suffers, while our kids can’t go to college, while our needs aren’t being met here at home, is absolutely an outrage.

As I stood up and spoke out, members of the audience tackled me, covered my mouth and violently threw me to the ground. Several of them were wearing badges from the powerful pro-Israeli government lobby group AIPAC.  Amidst the assault, the police came and dragged me out of the gallery.  They took me to an ambulance for urgent care, and later placed me under arrest at the hospital

AMY GOODMAN: What were you just saying? You were tackled by members of AIPAC?

RAE ABILEAH: I just wanted to say that the people that were sitting around me in the gallery of Congress yesterday were mostly wearing badges from the AIPAC Israel lobby conference. And I did not expect that people holding such power and representing such a huge lobby group would respond so violently to my peaceful disruption. And after I spoke out, Netanyahu said, you know, “This is what’s possible in a democracy. And you wouldn’t be able to get away with this in other countries like Tunisia.” And I think that is ridiculous and absurd. If this is what democracy looks like, that when you speak out for freedom and justice, you get tackled to the ground, you get physically violated and assaulted, and then you get hauled off to jail, that’s not the kind of democracy that I think I want to live in. 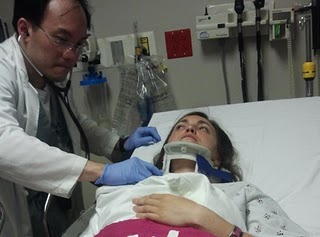 We have a very skewed policy that ignores the rights of the Palestinians, sanctions the Israeli violations of international law, sullies the U.S. reputation internationally and gives $3 billion a year of our tax dollars to the Israel military when we need this money here at home. Before we go preaching democracy abroad, we should make our own democracy more responsive to the public good, not the wishes of wealthy lobbyists.

I have been charged with disorderly conduct and have a court date next month. I also plan to press charges against the person who assaulted me. Unfortunately, we have discovered that in our democratic system, the police are quick to go after those who disrupt the powerful, but rarely go after the powerful who attack the “little guy.”

AMY : Many people will feel you are a crazy person to disrupt a world leader as he speaks before the U.S. Congress. Might there be other ways to make your point?

Yes, I try to make my point many ways—lobbying, writing articles, speaking to community groups. But I am reminded of the song by Malvina Reynolds that says, “It isn’t nice to block the doorways, it isn’t nice to go to jail, there are nicer ways to do it, but the nice ways always fail.”

I am as committed as ever to continuing to exert pressure on our US government using all the traditional channels, but I also recognize that it has been direct action and nonviolent resistance that has ultimately worked to create powerful change like the 8-hour work day, women’s right to vote, liberation in India, and the overturning of apartheid in South Africa.

One of the most important ways that we can bring about a change in policy in Israel is to exert economic pressure by participating in the Boycott, Divestment and Sanctions movement.

I’ve been to Israel, the West Bank and Gaza several times. And after witnessing the destruction, the Jewish-only roads, the wall, the bombing of Gaza and the inequality there, I feel like, when I returned to the U.S., I had no option but to speak out for justice. And I feel this tremendous responsibility as a Jewish American to speak out for justice and against these war crimes that are being committed in my name as a Jew, and as a U.S. taxpayer.

LISTEN TO THE WHOLE INTERVIEW HERE