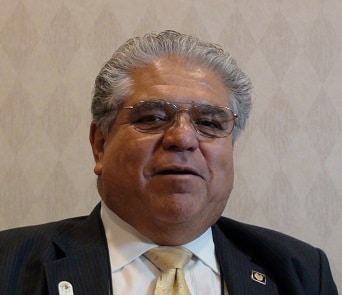 “Working with Steve Muro for more than two years, I know he has the vision to help transform the Department of Veterans Affairs,” said Secretary of Veterans Affairs Eric K. Shinseki. “Together with the other men and women of our Cemetery Administration, he will continue working to serve those who sacrificed for our country, their families and survivors.”

As the senior official for VA’s burial operations and memorial affairs, Muro is responsible for overseeing 131 national cemeteries that provide burial services for military Veterans and eligible family members.  He is responsible for operating and maintaining VA cemeteries as national shrines and for land acquisition and other activities related to establishing additional national cemeteries.  His responsibility also includes programs that provide headstones, grave markers, medallions and Presidential Memorial Certificates for eligible Veterans, as well as federal grants to help U.S. states, territories and tribal governments establish Veterans’ cemeteries.

Starting in 1979 as an automotive mechanic at VA’s Los Angeles National Cemetery, Muro’s life’s work has been linked with VA’s memorial affairs administration.  He served in leadership positions at eight VA national cemeteries and as director of VA’s Memorial Service Network IV based in Oakland, Calif., responsible for cemetery operations in nine Western states.

From 2003 to 2008, Muro was the director of the cemetery administration’s Office of Field Programs. During that period, he twice led that VA administration in achieving the unprecedented American Customer Satisfaction Index (ACSI) score of 95 percent.

In October 2008, Muro received the Presidential Rank Award as a Meritorious Executive.  Awarded to fewer than five percent of senior federal executives, the award recognizes exceptional leadership, accomplishments and service over an extended time period.  Also in October 2008, he was named the Deputy Under Secretary for Memorial Affairs.  He was named Acting Under Secretary for Memorial Affairs on Jan. 21, 2009.

Muro is a U.S. Navy Veteran who served two tours in Vietnam, including tours on board the destroyer USS Benjamin Stoddert (DDG22) and a tour with a mobile construction Seabee battalion.

In the midst of the largest expansion since the Civil War, VA operates 131 national cemeteries in 39 states and Puerto Rico and 33 soldiers’ lots and monument sites.  More than 3.5 million Americans, including Veterans of every war and conflict, are buried in VA’s national cemeteries on more than 19,000 acres of land. VA’s National Cemetery Administration has consistently received a top rating in the American Customer Satisfaction Index (ACSI), an independent survey of customer satisfaction. In 2010, it achieved a customer satisfaction index of 94.

Veterans with a discharge issued under conditions other than dishonorable, their spouses and eligible dependent children can be buried in a VA national cemetery.  Also eligible are military personnel who die on active duty, their spouses and eligible dependents.  Other burial benefits available for Veterans, regardless of whether they are buried in a national cemetery or a private cemetery, include a burial flag, a Presidential Memorial Certificate and a government headstone or marker.  Families of eligible decedents may also order a memorial headstone or marker when remains are not available for interment.

Information on VA burial benefits can be obtained from national cemetery offices, from the Internet at www.cem.va.gov or by calling VA regional offices toll-free at 800-827-1000.  To make burial arrangements at the time of need at any VA national cemetery, call the National Cemetery Scheduling Office at 800-535-1117.