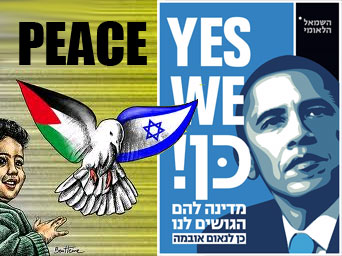 “The amazing moments in the march came when protesters chanted: “Israel and Palestine, two states for two peoples”; “Yes we ‘ken’” (the Hebrew word for “yes”); and “Bibi and Barak, peace isn’t a game”

In his recent and memorable speech at Capitol Hill and while mesmerizing America’s Congressmen with his reiterated talk of Israel being the only democratic friend of the United States in the Middle East, and as he was reaching a state of absolute euphoria due to the unbelievable non-stop applause and standing ovations he received from his most distinguished and hypocritical audience, Mr. Netanyahu, the Israeli prime minister, somehow forgot that the democracy he was boasting about incorporated a counter view to the one he was enthusiastically presenting to the American Congress about the Israeli-Palestinian conflict.

“No preconditions whatsoever, no concessions on Jerusalem as a unified capital for the Jewish state of Israel, no consideration of the right of return for the Palestinian refugees, no restrictions on Israeli military deployments outside its territory, no negotiations with any Palestinian delegates which include Hamas, and no clear indications of what territory might ultimately be sacrificed- painfully- to the Palestinians, even then, except that would not be based on any reference to 1967 border lines. In short, if the Palestinians want peace, they will have to accept whatever and whenever Israel is willing, unilaterally and unconditionally, to concede” …That was Mr. Netanyahu’s vision for any possible Mid-East peace or rather the impossible one.

In most political circles, this restrictive and shamefully biased and detached from reality vision for a so called peace will probably be viewed like Mr. Netanyahu is unequivocally blocking any hope for restarting the Mid-East talks, but the esteemed American Senators and Congressmen attending his speech didn’t think so. 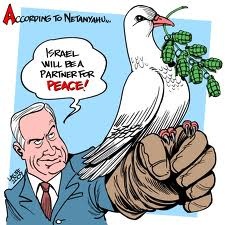 The Israeli Wall and the Wind of Change

Mr. Netanyahu, despite the brash and unapologetic chauvinism and his outright refusal of any political advice or moral leadership from Obama, proved that he is not an exception from those Middle Eastern dictators who are currently being toppled by their angry people in the region.

And as Thomas Friedman, the New York Times columnist, pointed out, Netanyahu is acting the same as Mubarak of Egypt who had the leverage and the time of 30 long years to empower his country and people but instead he wasted all the time and opportunities and when he was finally forced to concede and implement some democratic changes it was a matter of doing too little too late.

This is exactly where Mr. Netanyahu is headed, he has been following the Arab awakening, but as a politician he failed to see through the core of those uprisings.

Hiding behind his high West Bank wall he somehow couldn’t feel the wind of change sweeping through the whole Middle East. If Netanyahu had the kind of political and historical insight that allowed him to decipher what is being currently written down as history in the Middle East he should have realized that now is the time to change the Zionist rhetoric, let go of the old prejudices and make some concessions that would bring about peace to the Palestinians, the Israelis and the whole Middle East.

If only Netanyahu invested some critical and professional political thinking before he slammed the white house late initiative and if he had not been hypnotized by the support of the most fanatic Israeli right wingers and the most stubborn and unrealistic American Zionist lobbies he would have had the courtesy to contemplate the wisdom in Obama’s Middle East speech.

But not all the Israelis are grudging right wingers and not all the pro-Israeli American lobbies are as blinded and detached from reality like AIPAC. The newly liberal pro-Israel group, j-street has made it clear from the start that they endorsed Obama’s call for establishing a sovereign Palestinian state on the 1967 border lines and so did the liberals and the leftists in Israel.

Netanyahu left the United States feeling victorious after getting the American Congress on its knees and after having lectured Obama about the political perils of a two-state solution based on 1967 borders but it didn’t take so long before that phony triumph crashed upon the rocks of Middle Eastern reality, as Netanyahu himself put it.

Once he got back to Tel Aviv, Netanyahu called for a state of high alert as it was a matter of days before the anniversary of the six-day war, or what the Arabs refer to as the shameful setback or Naksa, that was launched on June 5, 1967 and after which Israel had premeditatedly occupied big chunks of Arab lands on 3 fronts, the Egyptian, Palestinian and Syrian.

Last week the Israeli defense forces –IDF- braced for possible Palestinian marches on the Israeli borders commemorating the 1967 Israeli aggressive war but this year’s Naksa day came a little different than what Mr. Netanyahu expected, not that hundreds of Palestinians didn’t march on the borders with Israel but because thousands of Israelis unexpectedly and on the evening of Naksa day marched in Tel Aviv itself and loudly called for the realization of the two-state solution now and before it is too late and exactly as president Obama has called for in his Middle East speech last month.

Some 5,000 people, with protesters affiliated with the Hadash party, Meretz, Peace Now, the Sheikh Jarrah Solidarity Movement and the Geneva Initiative marched through the streets of Tel Aviv Saturday evening in a demonstration calling for the creation of a Palestinian state contiguous to the Israeli state.

Those rallies shouldn’t be viewed as Obama striking back at Bibi in the heart of the Israeli capital but rather as a sincere bid for rejuvenating the call “give peace a chance” embraced by liberal politicians and peace activists in the United States, in Israel and even in the occupied Arab territories in East Jerusalem and the west Bank who are pleading for letting not, what might be the last chance to reach a fair and durable settlement of the Israeli-Palestinian conflict, simply slip away over some futile dueling speeches between Bibi and Obama in Washington DC.

“it’s difficult for us to be excited by the applause Netanyahu received in Congress. Applause there cannot protect us here.” said Meretz MK Zehava Gal-On as she addressed the Israeli protesters

Speakers in the rally included Knesset members from the Meretz, Hadash, Labor and Kadima parties who in turn showed their endorsement and solidarity to the recent call by President Obama for a two-state solution based on 1967 border lines.

The rally sends an important message about Israeli support for President Obama’s vision at this critical moment — especially as his opponents are on the attack, distorting facts and apt to question his political loyalty to the concept of greater Israel, a concept most of his predecessors of the United States presidents had subscribed to.

The amazing moments in the march came when protesters chanted: “Israel and Palestine, two states for two peoples”; “Yes we ‘ken’” (the Hebrew word for “yes”); and “Bibi and Barak, peace isn’t a game,”

Indeed… peace is not a game and neither is war.

… Those Israeli rallies which have been hardly reported by the main stream media clearly show that Obama’s Middle East speech should not be regarded as some kind of a political blunder that somehow offended the American Zionist lobbies and jeopardized his odds for a second term in office but rather as a road map that ought to be followed if Israel want to escape the otherwise inevitable doom of turning into an apartheid regime where a Jewish minority would rule over an Arabic majority. And we all know how appallingly apartheid regimes crumbled down throughout history.