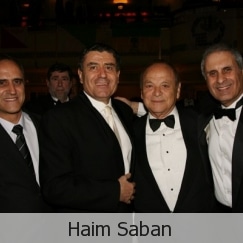 Ynetnews.com publishes Israeli Prime Minister Benjamin Netanyahu’s “list of millionaires,” a group of people Netanyahu identified as potential donors to him ahead of the 2007 primary elections in Israel.

What’s important about the list of donors that Netanyahu identified is what it says about the Israel lobby and the Democratic Party in the United States.  It goes a long way in explaining why hard-right Zionist views can be found among Democratic politicians.

It makes sense why this is the case with the Republican Party, as the ideology of neoconservatism and military interventionism is a core part of the party, and matches up nicely with Likud’s way of looking at the world and, in particular, the Palestinians.  But with the slightly more rational and liberal Democratic Party, which captured the House and Senate in 2006 in part because of growing opposition to the Iraq War, it makes less sense.

That is, until you look at some of the donors who Netanyahu reasonably thought may give him money and notice that at least a couple are heavy contributors to the Democratic Party.

Saban is a wealthy ”entertainment mogul” whose “greatest concern is to protect Israel” and who is “one of the largest individual donors to the Democratic Party,” according to a May 2010 profile of him in the New Yorker.  The profile notes that “in 2002, he contributed seven million dollars toward the cost of a new building for the Democratic National Committee—one of the largest known donations ever made to an American political party.”  But his political views match up with the Israeli right-wing, a decidedly illiberal set of viewpoints.

From Marwan Bishara’s blog on Al Jazeera, here’s Saban in his own words, taken from a 2006 interview with Ha’aretz:

On his worries for Israel:

“… Israel does not worry me. Israel’s neighbours worry me … History proved that Sharon was right and I was wrong. In matters relating to security, that moved me to the right. Very far to the right.”

“The Iranians are serious. They mean business. Ahmadinejad is not a madman.

“When I see Ahmadinejad, I see Hitler. They speak the same language. His motivation is also clear: the return of the Mahdi is a supreme goal. And for a religious person of deep self-persuasion, that supreme goal is worth the liquidation of five-and-a-half million Jews. We cannot allow ourselves that.

“Nuclear weapons in the hands of a religious leadership that is convinced that the annihilation of Israel will bring about the emergence of a new Muslim caliphate? Israel cannot allow that. This is no game. It’s truly an existential danger.”

On the possibility of an Israeli attack on Iran:

“Is there a higher price than two nuclear bombs on Israel? So they will fire missiles, all right then. Iran is not Lebanon, where you pinpoint specific targets: this bridge here, that building, half of that courtyard over there. In Iran you go in and wipe out their infrastructure completely. Plunge them into darkness. Cut off their water.”

“Would I prefer a defence minister who is capable of looking at a map and saying, ‘Half a division here, two divisions there, send the commandos from the north and let the navy hit from the south’? Yes, I would prefer that. Because to negotiate with management on behalf of the unions is a skill, but it’s a different skill from planning a war. In our situation, for all time, at least in our lifetime, we need a defence minister who has a thorough understanding of these subjects.”

Zuckerman is a media mogul who owns the New York Daily News and is the editor-in-chief of U.S. News and World Report, and is a major contributor to the Democratic Party, according to the Center for Reponsive Politics’ Open Secrets website.  He is a former head of the Conference of Presidents of Major American Jewish Organizations, and espouses hawkish views when it comes to the Palestinians.  For instance, in a Wall Street Journal op-ed, Zuckerman calls Jerusalem ”its capital” and refers to the illegal settlement of Ramat Shlomo in East Jerusalem as a “Jewish suburb.”

The Democratic Party is beholden to people like Zuckerman and Saban, who were listed as potential donors to a right-wing Israeli political party whose official platform states that Likud “rejects the establishment of a Palestinian Arab state west of the Jordan river.”

No wonder Likudnik views get play within the supposedly liberal party in American politics.

ED Note: A version of this article was published in October 2010 on young Alex Kane’s wordpress blog. Yes he is only twenty-one years old.