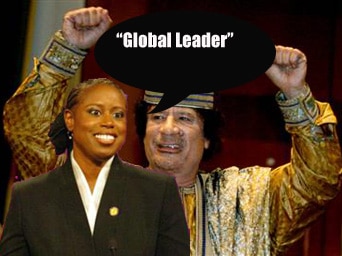 While Muammar Gaddafi grows ever more desperate as he loses key military support, former U.S. Congresswoman Cynthia McKinney (D-GA) is shamelessly serving as a propagandist for the Libyan tyrant’s regime.

Venomous remarks recently made by the former six-term congresswoman on Libyan state television were deeply disturbing, to say the least. Among her many outbursts, she charged that America is spending “money on death, destruction and war.” The fact that these comments were broadcast on Libyan state television, which serves as Gaddafi’s mouthpiece, makes matters all the more reprehensible.

Yet such behavior by Cynthia McKinney should come as no surprise. It is, in fact, demonstrative of a definable historical pattern. McKinney is part of a long Western leftist tradition of progressive sycophants traveling to adversarial lands in an effort to undermine America.

In 2009, for example, McKinney traveled to Libya and praised Gaddafi, calling him a “global leader” and thanking him for “reaching out from Africa to the entire world.” As she fell over herself to laud this mass murderer, a man who is widely believed to have ordered the bombing of Pan-Am Flight 103, she equated America’s economic system with “bondage.”

After her most recent Libyan rendezvous, McKinney traveled to Iran for what was billed as an “anti-terrorism” conference. There, she claimed to have been “politically assaulted” by American advocates of Israel during her time in Congress.

McKinney also propagated the anti-Semitic myth, widely believed in the Muslim world, that it is mandatory for U.S. Congress members to “pledge allegiance” to Israel. Much like her longstanding assertion that the September 11th terrorist attacks were part of a U.S government conspiracy, such cancerous falsehoods are readily used by jihadists to garner support for their cause.

Historically, Communist regimes — like Islamofascists today — positioned useful idiots like McKinney to their advantage. Take, for example, the Soviet Union’s rapport with its Western sympathizers, who came searching for Utopia. Naïve, often willfully ignorant, even deceptive and self-deceptive, the West’s apologists for Soviet Russia were despised by the Communist regime, but nonetheless, were found ever so valuable.

As Joseph Stalin turned the prow of the totalitarian state deeper into the maelstrom of centralization, his purges and pecuniary polices laid the country to waste. Conveniently for the dictator, notable Soviet apologists, like New York Times journalist Walter Duranty and ACLU founder Roger Baldwin, thought this suffering was tolerable, even needed. And they used their considerable influence to propagate this view – or to make excuses for Stalin’s terror (when they actually admitted it existed).

Duranty is famous for his oft-repeated assertion that Stalin “could not make an omelet without breaking a few eggs.” This “omelet,” as we know, meant misery, famine and death for millions of innocent people.

Similarly, for Roger Baldwin, the Soviet Union was “a great laboratory of social experimentation of incalculable value to the development of the world.” Stalin utilized Baldwin and other sympathetic leftists like him to spread Communist propaganda in the West and to strengthen his position at home.

With his two “fact-finding” trips to the U.S.S.R., Baldwin sought to uncover a “common core of truth” about the totalitarian state. In his 1928 work, Liberty Under the Soviets, he asserted that the American people were “uninformed” about the “great nation,” misled by a narrative of “prejudice, misinformation, and propaganda.” Naturally, in stark contrast to his portrait of the U.S., Baldwin offered demonstrative praise for Soviet methods.

In the tradition of Baldwin and like fellow travelers before her, Cynthia McKinney has also proclaimed that the purpose of her Libyan visit was to “understand the truth” of the reality in Libya. But even as she spoke those words, it became clear that the Gaddafi regime had a clear design for her visit. Indeed, as McKinney railed against American “policies of war” and “propaganda,” Libyan state TV ran her tripe – while showing split screen footage of pro-government supporters rallying.

During this “coverage” of McKinney, the Libyan station also claimed it was airing “live” footage of air-strikes by NATO warplanes against Gaddafi’s compound. The congresswoman, not surprisingly, played right along, peppering her disapproval with words like “shocked” and “appalled” in reference to her disposition toward U.S. actions.

McKinney went on to disparage our governmental system, slander our military men and women as “killers” and claimed that President Obama’s Libyan policy caused Americans to be “ashamed” of him. She also went out of her way to — once again — criticize Israel.

If that was not enough, McKinney praised the promises about Libyan “direct democracy” that are found in the infamous “Green Book” — a deranged manifesto written decades ago by Gaddafi himself. She made known (and not for the first time) that she favors Gaddafi’s democratic philosophy. Worse still, McKinney suggested that other Americans ought to do the same.

Yet, the people of Libya have never enjoyed any semblance of democracy supposedly afforded them by the “Green Book.”

Instead, they have been subject to the sadistic and vicious whim of one man for 42 years, who remains in power by the butt of a gun — now aided readily by mercenary thugs and the willfully malicious words of Cynthia McKinney.

Did I mention she intends to run for Congress again?

Brendon S. Peck holds a Master of Arts in history and political science from the College of Saint Rose and has completed graduate work at Columbia University.

Escondido city officials have closed Mayflower Dog Park after determining that a dog abandoned at the park has died of Parvo. The park will remain closed until further notice while various decontamination options are evaluated. go to website escondido humane society

This morning Escondido Humane Society staff notified Robin Bettin, Assistant Director of Community Services, that they had rescued an abandoned dog from the dog park earlier this week. The dog has since been diagnosed with Parvo and has died.Contact: Robin Bettin, 760/839-6269.