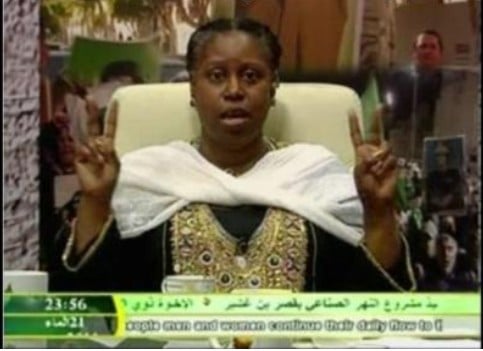 With a white scarf around her shoulders, and the familiar green banner scrolling across the screen, Cynthia Mckinney appeared on Libyan State TV on Saturday. What a triumph for the sinking ship that is the Gaddafi regime—as NATO and the international community continue their efforts to force Gaddafi from power. Here is their shiny white knight: an American ex-Congresswoman who’s willing to defend them against the Western-Imperialist-Al Qaeda-rats.

She’s the worst sort of person to be involved in the Libyan conflict: not only incredibly uninformed but deluded as well, having fully swallowed the lies of the Gaddafi regime as unalienable truths. Mckinney continues to defend Gaddafi as a ‘hero’ of African rights (we’ll talk about this more below) and refuses to acknowledge the crimes of his regime. Her justification for doing so indicates a stunning ignorance on her part. Even as damning evidence of the Gaddafi regime’s unspeakable cruelty mounts against it—countless videos, photos and eyewitness accounts of citizens, journalists and others—Cynthia Mckinney stands by Gaddafi, recently making an appearance on Libyan State TV from Tripoli as part of an NGO “fact-finding” mission.

There are many like her, among them, Louis Farrakhan, whose support of Gaddafi hinges on the fact that Gaddafi has funneled millions of dollars into the Nation of Islam and consequently into Farrakhan’s pocket. Farrakhan too has chosen to turn a blind eye towards the undeniable atrocities that the Gaddafi regime has perpetrated upon it’s own people (not just since February 15th but for 42 years) and instead has parroted government propaganda, painting the regime as some kind of perverted harbinger of peace to the African continent.

It was bad enough when Mckinney extolled the nonexistent virtues of Gaddafi’s ‘Jamahiriya’ as an idealized form of ‘direct democracy.’ Then, McKinney lauded The Green Book as some kind of paragon of democratic philosophy. Even Saif Al-Islam Gaddafi, his own son and former heir apparent, admits that the jamahiriya is no democracy.

Her appearance on Libyan State TV is a slap in the face to the Libyan people. Here, a former Congresswomen standing by the man who is responsible for the deaths of thousands of Libyans and on the same channel that has repeatedly aired footage of Gaddafi promising to “cleanse” Benghazi of dissidents, house by house and closet by closet.

Libyan State TV is a ‘a psychological weapon,’ a relentless propaganda machine. This is the same outlet that called rape survivor Iman Al Obeidy a ‘prostitute’ and accused her of lying about being captured and repeatedly raped and tortured by Gaddafi forces. Not to mention, the now infamous lies about Nescafe pills and al Qaeda terrorists and the denial of the deaths of what some reports suggest may be more than 30,000 Libyans.

Cynthia Mckinney says she’s in Tripoli because she wants to “understand the truth.” And yet professional journalists who’ve been stationed there for months say that the truth, in Tripoli, is impossible to find. “If there is a hell for journalists,” wrote Sky News’ Emma Hurd, “It will probably be a lot like the Rixos Hotel in Tripoli.” Journalists in Tripoli have been denied their freedom to report, restricted to the gilded prison walls of the Rixos Hotels, and forced, at times, to report the propaganda they are they fed by Musa Ibrahim, the Libyan regime’s snakelike spokesperson.

What  does Mckinney expect to find? Here’s what she won’t find:

Mckinney says Gaddafi is a champion of African rights, but Gaddafi’s actions on the African continent suggest otherwise. His plans for a United Africa seem to coincidentally insist that he be Africa’s figurehead. Gaddafi condescendingly calls himself the King of Kings of Africa, manipulating pan-African sentiments and handing out millions through Libyan development funds to fuel his delusions of grandeur. His record in Africa is mixed at best, dishing out much needed capital to poverty-stricken and indebted African nations to support his self-interests and feed his megalomania, while fostering rifts and fomenting war between rival groups and nations. Despite the regime’s heralding of the construction of a hospital here or a hotel there, not a single one of Libya’s (African) neighbors has been spared his destructive touch, constant meddling and absurd arrogance.

He has denied citizenship to Libya’s marginalized Tabou tribes, and exploited disenfranchised peoples, handing them weapons and money to go to war during Libya’s aggression on its southern neighbor, Chad. During that time he created and financed the Janjaweed, the brutal Sudanese militia who perpetrated the massacres in Darfur. The Janjaweed militia not only killed thousands, but also used rape as a “systematic weapon of ethnic cleansing.”

African immigrants in Libya are treated with hostility by the Libyan government and exploited for cheap labor. A Human Rights Watch report from 2006 found: “Foreigners in Libya reported police violence and due process violations, including torture and unfair trials.” The report also describes the dismal conditions under which Africans are held in detention camps for migrants. During the current crisis in Libya, the Gaddafi regime has been accused of using African migrants as weapons in the face of European hostility, cramming thousands of African migrants into boats by force. Hundreds have died in over-loaded boats that capsized en route to Italy.

Not to mention, the war crimes committed against Libyans, who are in fact Africans.

Gaddafi has openly and brazenly financed known war criminals in Liberia and Sierra Leone. Liberia’s ex-president and warlord Charles Taylor has a rap-sheet that rivals Gaddafi’s. He now stands trial on “11 counts of war crimes, crimes against humanity, and other serious violations of international humanitarian law.” Taylor and Sierra Leone’s rebel leader, Fonday Sankoh, were both trained in Libya and financed by Gaddafi— the two are responsible for hundreds of thousands of deaths in Guinea, Sierra Leone, and Liberia, not to mention the rape of hundreds of women and their indiscriminate use of child soldiers.

None of this is secret. It’s not hidden in a vault somewhere in Gaddafi’s super-secure compound of Bab Azizia. It’s not in any confidential CIA reports. These are facts: well-known, long-established, cold-hard facts—and yet Cynthia Mckinney seems to have no knowledge of them, instead giving preference to romantic notions of pan-Africanism perpetuated by the regime.

She makes other erroneous claims—she likes to tout Gaddafi’s system of “subsidized healthcare, education, housing, etc” as proof of his goodwill and legitimacy. She says Libyans enjoy the profits of Libya’s large oil reserves. She conveniently skirts the fact of Libya’s 30% poverty rate: 2/3 of Libyans live on less than $2 a day—unless you’re a close personal friend of Muammar you don’t see anything of that oil money.

Libya’s healthcare system is a disaster. The World Health Organization ranks Libya’s health care system at 87. In 2009, there was approximately 1 health care profession for every 1,000 Libyans. Many Libyans don’t find sufficient medical care inside the country and must make expensive trips abroad to Tunisia, Algeria, and surrounding countries for better treatment.

“Boarding an aeroplane to visit your doctor is common practice among Libyans,” reported a 2010 article in Middle East Economic Digest, “As a result of sanctions imposed during the 1980s and early 1990s, the country’s healthcare system has been starved of the investment and medical training needed to build a modern infrastructure of clinics and hospitals. Those in need of specialist care now drive to Tunis or fly to Malta, Germany or the UK to avoid the staff shortages and overcrowding that have become a feature of Libya’s public hospitals, of which there are now little more than 100.”

Mckinney’s claims of subsidized housing in Libya are also absurd. Libya suffers from a crippling housing crisis. In Tripoli, the government attempted to “tackle” a shortage of 500,000 housing units by building a series of luxury high-rises—but with a 33% unemployment rate, who could afford to live in such places?

Mckinney idealizes Gaddafi’s The Green Book—the same book that decreed that whoever lived in a house owned it—meaning a family could return from a weekend trip to visit family and find that squatters now own their home.

Again, these are not state secrets. A cursory Google search would’ve led Mckinney to the truth. Instead, Mckinney stews in conspiracy and panders to the Libyan government, disseminating their lies and perpetuating a Gaddafi-approved narrative. Mckinney freely lambasts Obama and NATO— who are in no way above criticism—but refuses to acknowledge the irrefutable war crimes of the Gaddafi regime. She would rather not acquaint herself with the truth, it seems—instead, she’d prefer to rub elbows with known war criminals and mass murderers on Libyan State TV.