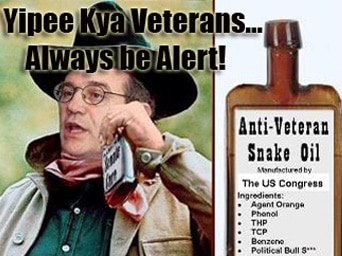 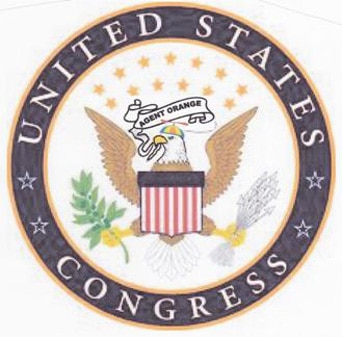 Today was not like every other day for many of us. For veterans having to deal with a proposed amendment to the Military Construction Bill I wrote about earlier, written by Senator (and doctor) Tom Colburn, and co-sponsored by Sen. John McCain, it was “mucho hustle time”.

My mailbox was overflowing with emails since about mid-Wednesday. The Senate was going to weight the validity of an amendment that Sen. Colburn wanted to attach to a bill that was intended to help reduce the federal deficit, by attaching it to the Military Construction Bill that was sure to pass. You see, that’s the problem with the doggone Congress and the Legislators who just can’t understand why the American voter is so angry with them.

Washington DC is another planet. Those inside the “Beltway” have no idea what goes on in this country. They are so far out of touch with real live Americans they think it’s OK to do what they want anytime they get an urge. Raise income taxes, add more tax to the cost of gasoline, confiscate land and shut off energy exploration, close businesses with over regulation, pour money down cesspools called Department of Education/Energy/Interior, initiate federal spending on programs without any vision or oversight, and go along with the appointment of a bunch of pinheaded Czars that have not been vetted by Senate Approval.

This whole concept of attaching bills to other bills, many times to avoid open and fair floor debate, many filled with pork and earmarks, and most having never been thoroughly read (does last year’s healthcare bill ring a bell), is downright criminal. As they used to say in Texas, maybe it is time “to get a rope and find a tree”. Folks…even those out here in the so called “fly-over country” are getting wise. Screw us once…shame on you; screw us twice, shame on us. We are now on about the umpteenth screwing but we are wising up!

Take the time to contact your local veterans groups and thank them for going into a “mucho hustle” mode that urged their members to write Congress with our outcry. Having lost friends who survived the war but lost the battle with cancer and/or other disease caused in whole or in part by Agent Orange, we must all realize the battle to get the remaining vets with problems covered is far from over. 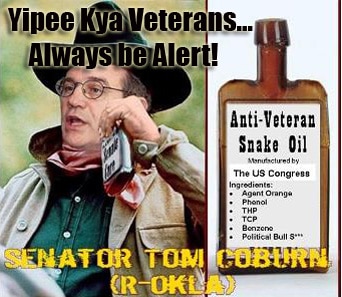 In the Senate debate on The Colburn amendment a lot of valid information was presented, and as I stated in my earlier article, the cause of these alphabet of diseases is because a person’s immune system simply failed to protect them. In a perfect world there would never be any diseases yet they have occurred since recorded time. Besides Agent Orange and other toxins many things can render an immune system ineffective. Today an example was used of someone who weighs in at 350lbs, smokes three packs of cigarettes a day, has an intake of high fat diet, and/or other poor lifestyle choices that also spent time in Vietnam. The discussion posed the question, “is the exposure to Agent Orange the actual cause of that person’s health problems after years of lifestyle abuse or not”?

That’s a valid question and to deny it is simply not realistic. During the floor discussion in the Senate, no one brought up the question as to Agent Orange possibly being “partially” to blame or the straw that broke the camel’s back (my metaphor for immune system). Were I to sit in judgment of a 350lbs person smoking 3 packs of cigarettes a day, I’d be inclined to say that that person was on a collision course well beyond exposure to Agent Orange.

Additionally there was no mention of the fact that the veteran is “innocent until proven guilty”. It is up to the veteran to prove the cause of his/her illness is due to Agent Orange and not up to the Veterans Administration to prove that Agent Orange isn’t the cause. I think the shoes are on the wrong feet. So, what does it take to validate that Agent Orange is the culprit, as we all know it can alter one’s chromosomal make up and lead to disease, but how do you prove it.

There are several things that need to be known:
1. Was the veteran directly in contact with Agent Orange? Contact could be by ingesting food, absorbed through contact with the skin, inhaled, or swallowed.
2. Was the contact simply in “association with” Agent Orange? Were they in the vicinity of contaminated areas and for how long?
3. Is there any residual evidence of Agent Orange chemicals or dioxin in the fat cells of the body?
4. Is there a family history of the suspected disease in the patient’s family?

While the veteran can answer questions 1 ,2, and 4, it takes a medical laboratory to answer question number three, which is probably the most important indicator if exposure, even proximinal exposure can be proven. We could find out at the time of autopsy as is done testing organs post mortem for toxicity when a suspected poisoning occurred. But to my knowledge, not many Vietnam veterans want to shoot themselves to get an autopsy or have access to medical labs willing to take sophisticated fat tissue samples and run costly analysis to determine whether or not body fat cells contain remnants of Agent Orange or dioxin. VA hospitals are; so why not use that mechanism to better determine who is or isn’t a candidate for assistance.

Agent Orange is a problem created by the Federal Government as are the other occasions where our troops have been exposed to toxins from other sources. Instead of trying to sell the public SNAKE OIL, it’s time to come up with real diagnostic procedures to determine who gets the blame. Most would be far more comfortable with the testing to be done by an independent testing lab, but a few years back the VA hospital in Little Rock embarked on similar fat-cell testing for Gulf War Syndrome.

We can send a man to the moon, solve small pox, and even build mechanical hearts, but we can’t take the time and invest the money to help one of our nations’ most valuable assets…unbelievable