Home World Rebels Without a Cause in London’s Tahrir Square 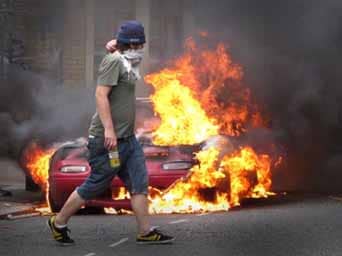 “Could those riots be related to the Norway bombing? Will the aftermath reveal the true reason behind these copycat lootings and arsons? Are we going to witness another example of multiculturalism failure, or rather provoked to the point of failure, in yet another European capital?”

A lot of pundits and opinion makers held back from rushing into commenting on the rioting that’s been taking place in London and other British main cities over the last few days simply because they were overawed by the unbelievably horrifying and unprecedented pictures of the seemingly mindless thuggery, vandalism and theft that were being broadcast live around the globe.

Great Britain, the European nation with the long legacy of unshakeable social traditions and respect for freedoms and private properties was being humiliated and embarrassed before the whole world by some groups of its new generation of small boys and girls.

You can comment on events you can understand but how could you react to eventualities that you don’t even believe you’re beholding.

The brazen looting by often drunk kids, who seemed to get a kick out of setting the city ablaze, made this whole inferno in need of behavioral sociology and psychiatry experts, and not the op-ed writers, to delve into this grotesque situation and analyze the reasons behind it.

The British police has not been the only party caught by surprise by this unprecedented rioting the British government, as clearly shown by Mr. Cameron statements, has not been less startled or bewildered but that doesn’t make him or his government less responsible for it.

Mr. Cameron has referred to the riots as acts of pure criminality that could not be accepted or justified by any means but while that statement struck a chord in the British house of parliament it demonstrated a total ignorance and lack of understanding on the part of Cameron’s government of the nature of the breakdown in the British society.

Looking at the footages and pictures of the London riots, released by the mainstream media and uploaded on the web, we couldn’t help noticing that all of the rioters are simply kids in their mid-teens. And yet those kids sowed fear and did harm to their communities like never been witnessed since the London blitz.

All this talk about how this anarchy was triggered by the killing of a Tottenham black man, 29 -year-old, Mark Duggan or trying to historically relate it to the Brixton riots of the early eighties somehow seems hardly relevant to the completely disproportionate violence and copycat looting and vandalism that erupted afterwards.

In Egypt a similar incident of the killing of an Alexandria resident, 28-year-old, Khalid Saeed, by two police detectives who beat him to death last year has considerably sparked and contributed to the first mass rallies that led to the January 25 uprising.

But the rallies and the thousands who took to the streets of Alexandria and Cairo were peaceful protesters who rallied for undeniably good and just cause with specific demands that primarily called for political freedoms, equality and social justice.

But when we turn back to the British riots we fail to see any obvious criteria to help us recognize it as political or socio-economic upheaval and as the famous comedian, John Bishop condemned the violence on Richard Bacon’s BBC 5 live programme and said: “None of us really know what’s driving it. It’s not rioting for any political reason, it’s not rioting for any social motivation, it’s not even rioting for a materialistic reason because once the lootings done why set fire to the building? And that to me, gives some sort of indication that people don’t feel socially connected to the environment they’re in.”

Similar looting and arson have racked major Egyptian cities during the uprising but later we discovered that those acts of vandalism were preplanned by the Mubarak regime loyalists and his state security apparatus. Will the coming days reveal a hidden link to the London riots?

Could those riots be related to the Norway bombing? Will the aftermath reveal the true reason behind these copycat lootings and arsons? Are we going to witness another example of multiculturalism failure, or rather provoked to the point of failure, in yet another European capital?

War on terrorism and the European looming recession

I think while the successive British governments have been engaged and fully preoccupied in allying with the United States in the so called global war on terrorism, the British policy makers, and a lot of other European governments, have overlooked the plausibility that by their military overspending in the illegal wars in Iraq, Afghanistan and now in Libya they were not only full speed into bankruptcy but also falling short in tackling other vital domestic issues like proper education and employment.

The taxpayer bailout of corrupt banks initiated by predecessor Prime ministers and now overseen by Cameron, paid for in large part by austerity in public spending cuts that have consequently weighed down on the housing, proper education and employment of the new generation is but the latest realization of Karl Marx words “An accumulation of wealth at one pole of society indicates an accumulation of misery and overwork at the other”. That is the hallmark of capitalism in today’s Britain, the US and Europe.

What on earth were those marginalized British teens thinking?

Well, that is not so hard to figure out. If you can control what people see, hear and read you can pretty much control what they think. And the crimes those young Londoners have apathetically committed testify To the reality that those teens were brought up under the street laws, forsaken by their government, addicted to violent video games and booze and subjected to too much Harry potter and street gangs’ movies.

Mr. Cameron mentioned that he will not allow a culture of fear to prevail in England but somehow ignored the fact that many governments dating back to Mr. tony Blair’s contributed to this culture of fear by allowing a whole new generation to grow up with no sense of national belonging and with extremely worrying anti-social attitude.

Ever since the Egyptian uprising erupted and the Tahrir square sit-in example has been emulated in so many countries, we have seen it in Bahrain, Yemen, Spain and lately in Israel.

In Yemen and Bahrain the protests were calling for pro-democracy measures, in Spain they were protesting unemployment and in Israel, besides protesting the high cost of living and housing the Israelis subconsciously are trying to linger this unprecedented moment not only to pressure Netanyahu’s government into making economical concessions but also to bask in the warm feeling that the world is watching them, and may be for the first time, not as an aggressive military Middle-Eastern enclave but as a nation, for a change.

But in England we failed to see through all the riots and the arsons except the fear and a society on the verge of anarchy and Reeves’ Corner, Croyden is certainly not London’s Tahrir square.

Mr. Cameron can blame this whole anarchy on hoodies and facemasks, on blackberry and Twitter, on discriminatory police conduct and lack of proper parenting but the fact will remain that the British society is evolving into some new polarized society the lower classes of which have exhibited in the past few days a nationwide tendency towards forsaking an old British value of respecting pro-sociability and adopting instead the primitive comradeship that is only a good value for street mobs and rebels without a cause.