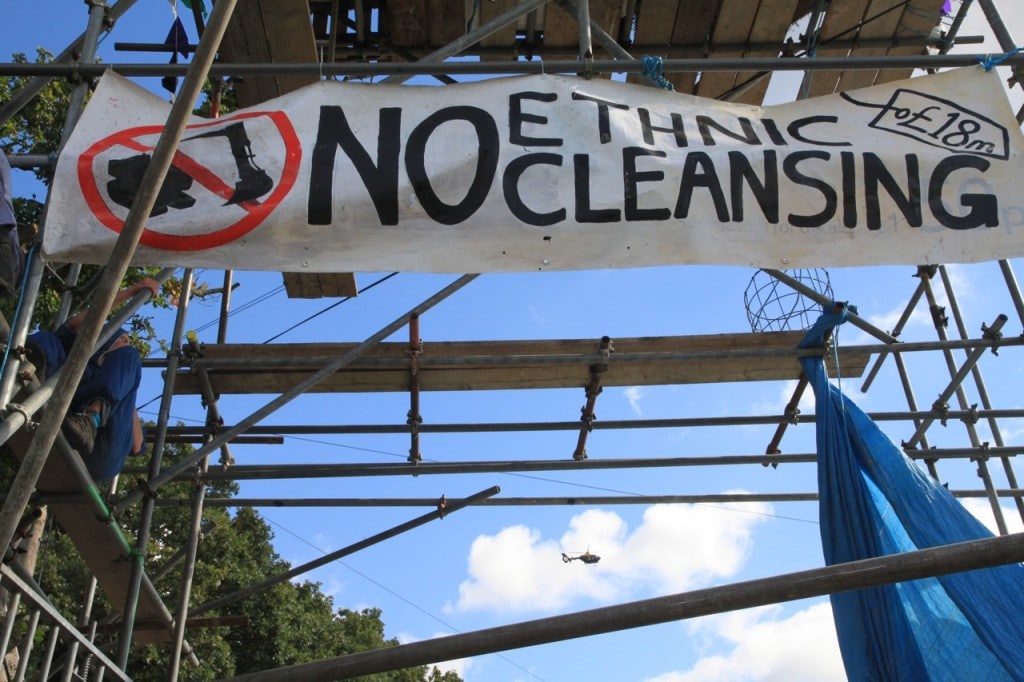 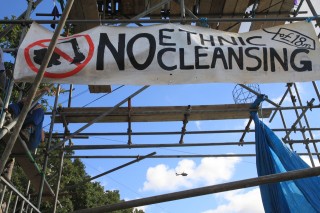 The Prostitutes of Propaganda (POPs), otherwise known as the mainstream media, would have you believe that the Irish Traveler residents of Dale Farm are nothing more than miscreants who expect special favours when it comes to the law. For those who know nothing of Dale Farm, here is a very abbreviated history.

Dale Farm’s residents are Irish Travelers, many identify them as Gypsies, whatever one might wish to call them they are a people who do not fit neatly into the brainwashed consumer culture, to the contrary they are a sort of people that are impossible to tame. This trait and their Irish roots attracts me to them. I love free spirits, I am myself a free spirit, so I relate to anyone who would rather die with self-respect and honour rather than capitulate to the tyrants and their minions and live a domesticated, capitalistic, consumer life.

Well those living on Dale Farm are like all travelers and Gypsies in the UK and pretty much everywhere else. They are pushed to the margins of society, they are discriminated against and often times they are scapegoated by governments and the POPs. They are soft targets if you like, Hitler didn’t like them either, they have been historically persecuted and if you possess the capacity to empathize then you will understand the healthy dose of mistrust and anger many of the travelers feel towards society at large.

In short, the travelers get screwed left right and centre and have been for a long, long time. You could very well compare them to black people, the Irish as a whole, immigrants of all sorts, because just about every group of people who are subjected to gross injustice will lash out in one form or another.

And when the oppressed do lash out or resist oppression the powers that be and the POPs will of course seize the opportunity, excuse themselves of their corruption and crimes, and scapegoat the targeted underclass of the day. This is a pattern that has been employed with great success for centuries, millennia actually. The targets change, but the pattern continues.

The greatest utility of the scapegoating tactic, from the tyrants point of view, is that it feeds the divide and rule agenda. Get the working class, the wage slaves of today and the all out slaves of past fighting each other and convince them that the other guy is stealing food from your table.

And so it goes, the Irish Travelers of Dale Farm are the latest targets.

The official version of their story is they purchased “Greenbelt land” (land designated as non-build land as protection against urban sprawl) and proceeded to move onto the land with no respect for the law, laws that require them to submit a planning application to the local counsel in order for them to get approval to live on the land. Problem is that nearly every planning application submitted by travelers across the UK is promptly rejected.

Ah but this has nothing to do with racism, nah, this is just a simple matter of the law. After all, why would the servile, corrupt and greedy little minions of the government and the POPs feed into racism or marginalize undesirables?

So let’s get this straight, the political puppets in government, whether in the UK, Europe or USA,continue to give a ‘blank cheque and moral cover’  for farcical, criminal wars and crimes against humanity, fighting some ridiculous, invisible and non-existent bogeymen, and to top that off these same traitors just gave the bankers trillions, not billions, trillions… because they were “too big to fail”.

These political puppet minions, servile traitors, whipping boys for the rich and powerful, just gave those same powers that be, the worst within our society, trillions. So the most corrupt and pathetic gave the most ruthless, most pompous, arrogant, self-absorbed, the richest of the rich already, trillions… and now they are telling you and I about the millions it will cost to make over 80 families of Dale Farm homeless… because they bought Greenbelt land and built on it!

Ah but it gets better, here are a couple of facts not so hyped by the POPs;

So when it comes to the law the counsels are totally fine with turning “Greenbelt land” into a scrap yard, when it suits them of course, but when it comes to setting aside land for travelers in accordance to the law, well that is a different matter. Hypocrisy and corruption, same old story, time to call in the POPs. Time to con the peasant wage slaves into believing that the travelers are the problem, that our financial woes are part and parcel to the travelers disrespect for the law.

It is pathetic and as I get ready to head to Dale Farm and live there until the next period of potential eviction, I feel honoured. I am genuinely honoured to be welcome on Dale Farm, the people there remind me of another people I know, the Palestinians. Both of them are facing racist, corrupt and violent powers, both of them refuse to bow to their oppressor. I love them for both this.

In fairness I will acknowledge that some travelers/Gypsies, not all, can make quite nightmarish neighbors. Years ago I myself have had property stolen from Gypsies and have had a bottle thrown at me head by one of them. But I understand their rage, their fuck off attitude to the “settled” population. We are the ones who have sat by and given cover for the governments right and left to shit on them. We don’t care nothing for human rights, we care about property values. We have no sense of community, we willingly live in a dog eat dog world.

The travelers have a community, downtrodden as it may be, and I respect that. Their mistrust and quite frankly, their anger towards society at large, is from my view totally understandable. Nonetheless, if I were to be asked by them for my opinion I would encourage them to establish that their cause is every working class person’s cause. I would encourage them to take their anger, channel it effectively, and expose the government for the craven minions they are. But you know what, they are pretty much doing that already.

And so it is I am on my way to Dale Farm, from what I know the residents have invited all people of good will to join them. I reckon that if enough good people do come down, we can force the government to stick their tales between their legs and cower off.

Let us realize more and more the Dale Farm struggle is connected to all just struggles, including Palestine. A victory for the people of Dale Farm is a victory for all people who love truth and justice. Sometimes the little battles have great importance, I think Dale Farm is one such battle, and so I head there with optimism and conviction.

Hope to see you there.

Ken is a former U.S. Marine who served in the 1991 Gulf War and subsequently spoke out about the use of depleted uranium as a “crime against humanity” and the US military using soldiers as “human guinea pigs” with experimental drugs that were directly linked to Gulf War syndrome. He is also a social entrepreneur utilizing direct action marine conservation, he is more widely known for leading the human shield action to Iraq and as a survivor of the Israeli attack on the MV Mavi Marmara in which he participated in “defending the ship” and “disarming two Israeli Commandos”.

On January 7, 2004, O’Keefe burned his US passport in protest of “American Imperialism” and called for US troops to immediately withdrawal from Iraq. He replaced his US passport with a “World Passport”, subsequently proclaiming himself a “Citizen of the World” with “ultimate allegiance to my entire human family and to planet Earth.” His is also legal citizen of Ireland and Palestine citizenship. Read Full O’Keefe Biography>>>