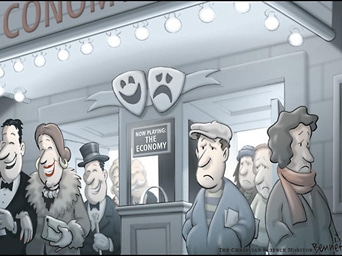 BENEATH THE SPIN * ERIC L. WATTREE

The spontaneous demonstrations that are taking place on Wall Street and across the country should be seen as both good news, and bad news for President Obama. On the one hand, they indicate that the people are waking up to reality, but on the other, it means that they’ve come to the conclusion that if they want to survive they can’t depend on the help of politicians – and that includes Obama.

So it’s time for Obama to wake up as well. The time has come for him to open his eyes to an ugly reality – we’re knee-deep in a class war. So if he intends to win the coming election it is incumbent upon him to make a clear distinction between himself and the GOP. If he fails to do so, the next election is going to be a toss up.
The days of compromise and bipartisanship have past. The GOP has long since made it abundantly clear that they’re on a single-minded mission to lower the standard of living of the American middle class. So at this point in our history, the people don’t need a calm and reasonable diplomat; they’re in desperate need of a no-nonsense, fire-breathing general at the helm.

Earlier in his administration when he tried to appeal to the GOP’s “good sense and responsibility,” many might have disagreed with his approach, but they gave him the benefit of the doubt because they assumed that he was trying to raise the level of statesmanship in Washington, D.C. But now, after the GOP has made it clear that they’re willing to hold the entire nation hostage in order to get the most minor of perks for those who are already filthy rich, to hear the President of the United States running around Washington asking “Can we all get along?” makes him look like the quintessential wimp, and the American people don’t like wimps – that’s one characteristic that ALL Americans have in common.

Thus, while many of us breathed a sigh of relief when the president introduced his jobs proposal, it was only because we were encouraged by seeing a little starch in his spine. But the fact is, just like in his stimulus package, he’s not going far enough. He’s still trying to straddle the fence. All that’s going to do is keep everyone upset with him. He’s tried appealing to those who hate him and all that did was make him look weak. Now it’s time to appease his base, if it’s not too late. After all, those are the ones who got him elected.

As any marine – or anyone who grew up in the ghetto – can tell you, it’s useless to try to engage in half-a-fight. You have to either go for broke, or run. So regardless to what kind of proposal Obama puts forward the GOP is going to fight it tooth-and-nail, so he might as well tell them he’s not going to sign any bill that places the poor and middle class in any further distress, he’s going to bring these senseless wars to an end, and he’s going to completely abolish the Bush bonuses to the rich. If he did just those three things, it would place the nation back on an even keel, and he’d regain much of his base. But if he fails to do so he’s going to go into the 2012 election as a man without a solid constituency, and that’s not a winning strategy. 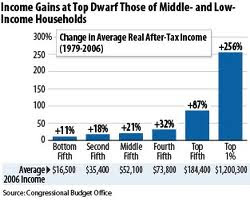 You see, what the nation is currently going through is a manufactured crisis. The GOP purposely dragged the country under the bus in order to justify attacking the programs put in place under the New Deal and later legislation. Programs like Social Security, Medicare, and the Fair Labor Standards Act, that protect the interest of the poor and middle class have been a thorn in the GOP’s side for over seventy years, but the programs were much too popular among the people to attack head on. So under Bush they ravaged the treasury by literally throwing away money in Iraq – there are billions of dollars that’s still not accounted for – and at the same time, they gave the rich the biggest tax cut in the nation’s history. Now, they’re claiming that we’re so broke that they’re FORCED to make the poor and middle class suffer to get us out of it. That’s ridiculous! Why should the poor and middle class suffer while the top 1% of the country is enjoying a bonus?

Then they try to justify this totally unconscionable situation by claiming that it makes perfect sense, because “it is the rich who create jobs.” That’s even more nonsense. Jobs are created by the poor and middle class when they spend money on goods and services. It doesn’t matter how much money we give the rich, if average people don’t have money in their pockets to buy goods and services, the rich aren’t going to hire anyone to produce goods and services. If you make widgets and no one has the money to buy them, are you going to waste your money hiring people to make them? Of course not – it doesn’t matter how big a tax cut they give you.

That’s why the GOP is determined to see to it that the poor and middle class don’t have two extra nickels to rub together, because the Republicans know that if the people are allowed to get their hands on money from any source, they’re going to spend that money, and that’s going to create jobs, and the jobs will generate tax revenue that will help relieve the deficit, and that in turn, will cause the GOP scam to completely unravel. Because, you see, the GOP has a vested interest in keeping the American people miserable, angry, and divided until the next election. That’s their only chance to regain power. That’s also why Governor Rick Perry,  Republican of Texas, literally threatened Federal Reserve Chairman Ben Bernanke bodily harm if he printed any more money between now and the election. Perry said, “If this guy prints more money between now and the election, I dunno what y’all would do to him in Iowa, but we would treat him pretty ugly down in Texas.”

So President Obama needs to stop playing footsy with these people. He should stand firm, start educating the people, and begin systematically unraveling this Republican scam. Then, if the GOP begins to obstruct, they’ll also be revealing their treachery against the American people.