Home WarZone Tribunal That Should Have Been Reported By Your Press, But Wasn’t 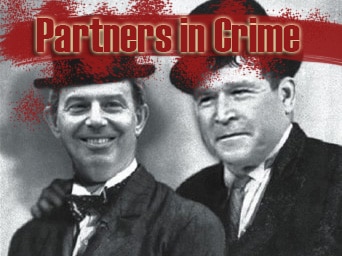 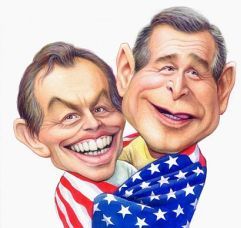 Some rightly proclaim there isn’t a snowball’s chance in hell that an international court would charge, much less convict, an American or British leader. This may seem like a quixotic endeavor, but Francis Boyle has had success with filings in international courts before, gaining an indictment against former Yugoslav president Slobodan Milosevic in the International Criminal Tribunal of the Former Yugoslavia (ICTY).

Former US president George Bush and his former counterpart Tony Blair were found guilty of war crimes by the The Kuala Lumpur War Crimes Tribunal which held a four day hearing in Malaysia. (Nov. 18 – Nov. 22, 2011)

The five panel tribunal unanimously decided that Bush and Blair committed genocide and crimes against peace and humanity when they invaded Iraq in 2003 in blatant violation of international law.

The judges ruled that war against Iraq by both the former heads of states was a flagrant abuse of law, act of aggression which amounted to a mass murder of the Iraqi people.

In their verdict, the judges said that the United States, under the leadership of Bush, forged documents to claim that Iraq had weapons of mass destruction.

They further said the findings of the tribunal be made available to members of the Rome Statute and the names of Bush and Blair be entered into a war crimes register.

Both Bush and Blair repeatedly said the so-called war against terror was targeted at terrorists.

Lawyers and human rights activists present here say the verdict by the tribunal is a landmark decision. And the Kuala Lumpur War Crimes Foundation said it would lobby the International Criminal Court to charge former US president George Bush and Former British prime minister Tony Blair for war crimes.

How many victorious war Heads have been convicted?

Furthermore, what  must be noted and questioned though, is that there is not one Zionist listed. Why aren’t Wolfowitz, Feith, Libby, Zelikow, Lieberman, Wurmser, Abrams, Chertoff et al. mentioned? There must be a reason.

Why do people of Prof. Boyle’s knowledge and intelligence continue to focus instead on the assets like Bush, Blair, Obama and Brown?

That said, if we cannot really expect to see any of those Gentiles brought to Justice, just why do you think he would waste any time trying to bring some of those Jews to Justice. This will rapidly turn into a meaningless exercise, much like most rabbinical issues and arguments. Go figure!

And no Jews, Neocons, or their sympathizers, however guilty of War Crimes and Crimes Against Humanity will ever sit in the dock in court accused of crimes unless and until he has been reduced to the status of the vanquished and defeated in war, in which case he may be tried and executed by the victor’s courts.

Had Saddam won the war it would have been GWB who would  have swung, and Rumsfeld who was hung today.

Gordon Brown’s Shocking – “It was the right decision”

A commentary on Gordon Brown’s statement to The Iraq Inquiry on March 5th, 2010