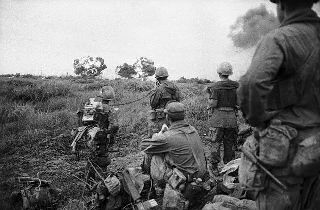 Actually calling Vietnam a misunderstood war, like all wars before and after, might be a little short-sighted. Perhaps, in retrospect, all wars are misunderstood wars, but Vietnam seems to get the hair on the back of your next to stand up if you had any involvement in those days. This is probably true for those who served and those who ran as far and as fast as they could in the other direction.

If you managed to get through high school in the Sixties, you are probably listed among the ranks of those who know the purpose of World War I, World War II, and the Korean War, but those who attended high school since, probably have a fairly distorted view of anything dealing with the military and geopolitics that causes a country to send its youth off to fight on a foreign land. Much of the blame for that has to be placed on the quality of the history teachers that were turned out of universities and colleges during the Vietnam era. Most were so biased by the Vietnam War, whether they fought in it, ran from it, or protested against it, that getting to the truth, through all the revisionists’ assessments, would be impossible.

The Vietnam War was the “turning of the tide” for all media outlets, to veer left, and become a one-sided propaganda mouth piece for liberal spin, until the bright, clear, Tuesday morning of September 11, 2001, when America awoke to the 911 attacked in New York. It was a temporary wake-up call to journalists, historians, and the general population.

I would not even begin to suggest that the media has returned to the center-of-the-road in investigating and reporting the news, but for a brief period of a year or two, we actually witnessed real news coverage that was pretty much unbiased, as the nation was shocked into reality…it really is a dangerous world out there. Perhaps that’s the origination of the saying, “we need a good war now and then to clean things out”. Unfortunately, long wars have a tendency to return things to “normal”, and unfortunately, the new normal is liberal journalism.

Well, for certain there are truths about the Vietnam War, from the use of chemical weapons, to the not-so-truthful accounts which came from the battlefield. War is hell, and those who waged the fight have stories which are seldom told because of the horrors the storyteller must relive.

All Americans need to know the real facts about Vietnam, particularly our politicians and those running for office. If they do not know and understand history, they will surely continue to repeat it. This was aptly demonstrated, as I wrote in my article Wednesday, by Republican candidate Jon Huntsman, who wasn’t even born when American involvement began (a typical product of high school history mentioned above). During the presidential debate he claimed President Johnson listened to his generals, and inferred that’s why the war went south. This is the exact opposite of the truth. Johnson didn’t listen to his commanders in the field, but chose to follow the path recommended by McNamara and  chose political expediency which he felt would insure his re-election.

Every now and then it is good the remind folks about Vietnam. Maybe someday the lies, innuendos, and rumors can be permanently laid to rest if we periodically revisit the truth about the Vietnam War. Let’s start out saying, as I have written about on several occasions this past year, THE UNITED STATES DID NOT LOSE THE WAR IN VIETNAM. Our military performed well and, and on the eve of what have could have been a victory, our government simply gave up.

This is has been well documented by the Vietnamese themselves and is discussed in length by North Vietnamese General Vo Nguyen Giap, whom I wrote about earlier this year. I hope this is an eye-opener to all the historians and media mavens who have tried to alter history professing America’s loss in Vietnam…

"What we still don't understand is why you Americans stopped the bombing of Hanoi. You had us on the ropes. If you had pressed us a little harder, just for another day or two, we were ready to surrender! It was the same at the battles of TET. You defeated us! We knew it, and we thought you knew it. But we were elated to notice your media was definitely helping us. They were causing more disruption in America than we could in the battlefields. We were ready to surrender. You had won!" (Gen Vo Mguyen Giap)

I never met Cyber Sarge, but ran across his website several years ago and only know him by what he says of himself…”As a soldier who served 14 months in Vietnam, I feel that the facts have been blurred on the war in Vietnam (a Police Action when we fought the war). The news media did not report the facts and present it to the public in a manner helpful to its troops, such as WWII. Our own government was trying to politically run the war where our commanders should have been in charge, thus relying on their knowledge and experience. Our people back home did not support us, which was a tragedy in itself, let alone the psychological effect on the troops”.

When I first came across his site, I thought, “My God, somebody else feels the same way I do about The War and has dug up the facts to support what anyone who bothered to research what was going on back then would discover”. The information is all out there, but history teachers who somehow forgot how to do their homework, the liberal media, and the “blame America first crowd”, choose to ignore the truth. You can’t hit them all in the head with a 4 x 4 to make them face the facts, so I guess we’ll have to bring up the truth every couple of years and hope we can change how Americans view our effort in Vietnam and the troops that went to war.

The war technically lasted from August 5, 1964 until May 7, 1975, though our CIA was in-country as military advisors long before our troops arrived. Over the course of the war, 2.7 million men and women served in Vietnam, which was about 10% of the eligible youth of that era. 58,148 were killed, and about 75,000 were wounded, with over 22,000 being permanently disabled. 19.7% of those killed were younger than 21, and 30% were married. In face of this evidence, 97% received honorable discharges, 91% say they were glad they served, and 74%, say they would serve again even knowing the outcome.

Are these the fact presented to the public by our history classes and the media? Far from it. Throughout the Seventies kids were taught, exactly the opposite, many claiming desertion was excessive, troops were all morally broken by the war, and that virtually every veterans was despondent about his/her military service. In fact I have never come across anyone who realized there 240 Medals of Honor awarded to those who served which is more than 20 each year on average; an unbelievable feat for any war, and moire than any war since the award was commissioned

What was taught through the media, and by our schools was that the war was unjust, immoral, and that those in the military were “Baby Killers”; that most everyone who went to Vietnam was drafted, that the war was fought mainly by lower income blacks and other minorities (mainly the uneducated, not smart enough to dodge the draft), and that most of those killed were blacks. It has also been stated by “those with all the answers” that  the war wasn’t as vicious and intense as World War II and other wars; and that the entire basis of the campaign to halt to progression of communism-the so called “Domino Effect”, was bogus and a complete lie to the American public.

An example of the mis-information perpetrated by academia and the “enlightened elite, upper-crust, politically-correct dimwits” is totally destroyed by the facts:

The Domino Effect was indeed true: The ASEAN (Association of Southeast Asian Nations) countries, Philippines, Indonesia, Malaysia, Singapore and Thailand stayed free of Communism because of the U.S. commitment to Vietnam. The Indonesians threw the Soviets out in 1966 because of America’s commitment in Vietnam. Without that commitment, Communism would have swept all the way to the Malacca Straits that is south of Singapore and of great strategic importance to the free world. If you ask people who live in these countries that won the war in Vietnam, they have a different opinion from the American news media. The Vietnam War was the turning point for Communism.

Most of those servicemen who went to Vietnam were not drafted. In fact 2/3 volunteered compared to 2/3 of those who fought in World War II who were drafted.  12.5% of those killed were Black, 1.2% were other minorities, and more than 86% were Caucasian. The reason the figures are higher for whites is that many were from well-to-do families and more likely to be pilots or infantry officers. Vietnam Veterans were the best educated forces our nation had ever sent into combat. 79% had a high school education or better and after the war 85% had a successful transition to civilian life, the highest number for any war in our history.

Sociologists Charles C. Moskos and John Sibley Butler, in a recently published book “All That We Can Be,” said they, “analyzed the claim that blacks were used like cannon fodder during Vietnam and can report definitely that this charge is untrue. Black fatalities amounted to about 12 percent of all Americans killed in Southeast Asia”.

For truth seekers, you now have the facts and are no longer in the dark. For those who continue the anti-war propaganda about Vietnam, the 58, 148 Soldiers, Marines, Navy, and Airman who lost their lives in Vietnam would be the first to stand up for your right to spread your mis-information in this land of free speech. If you still carry ill feelings about your military and don’t wish to stand behind them in this era of terrorism, please feel free to stand in front of them!