Home World Britain May Be a Christian Country… 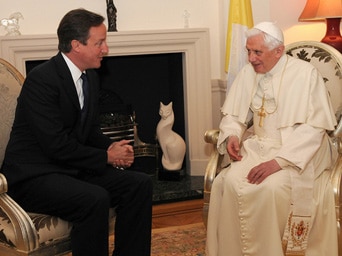 But its government marches to the beat of another drum

Prime minister David Cameron has told Britain: “We are a Christian country and we should not be afraid to say so.”

He was speaking on the occasion of the 400th anniversary of the King James version of the Bible which, he said, had helped to give Britain a set of values and morals that make us what we are today.

True, but can our churchmen ‘do politics’? They perpetually fail to get a result even on the Church’s ‘home turf’, the Holy Land.

It’s painful to be reminded that while Israel was planning its murderous 3-week assault on the people of Gaza (including the Christian community there), which it launched three Christmases ago, the Archbishop of Canterbury was visiting the former Nazi camps of Auschwitz-Birkenau in Poland with the Chief Rabbi to show joint solidarity against genocide.

“This is a pilgrimage not to a holy place but to a place of utter profanity,” he announced. “How shall we be able to read the signs… that evil is gathering force once again?”

He needed to look no further than the prison camp that the Holy Land has been turned into by the never-ending Israeli occupation. Couldn’t he sniff the stench of profanity besieging the Gaza Strip which, some claim, Israel uses as a warfare laboratory? Hasn’t he noticed a strong whiff of evil in the judaisation of Jerusalem and the expulsion of its non-Jewish citizens?

And when the Archbishop visited the Holy Land in 2010 the Israelis prevented him seeing the horrors their thugs had inflicted on Gaza and obstructed him in his Christian mission there. But he still fraternised with their rabbinate and their President, and paid homage to Yad Vashem and the Holocaust, thus appearing to legitimise the blockade, the persecution of Muslim and Christian communities and Israel’s contempt for international law and human rights.

The Pope fell for the same propaganda trick.

The Church clearly needs the mother of all shake-ups before it’ll be capable of rolling up its sleeves and getting political.

Britain as a country may still be Christian but what about its government? Mr Cameron describes himself as a “committed” Christian but only a “vaguely practising” one. What does that mean? Are Christian principles getting in his way?

Or is he sending a coded message of comfort to friends in Tel Aviv and Washington?

For Cameron also claims to be a Zionist.

He voted enthusiastically for the Iraq war, an irresponsible and un-Christian thing to do based on neo-con lies. And look what it has cost in lives and wholesale destruction. Now he and foreign secretary William Hague are upping sanctions designed to cripple the Iranian economy and bring misery to that country’s civilian population. Shades of Iraq… sadistic action once again based on mere suspicion of wrongdoing, not actual proof. Is this proper behaviour for even the “vaguest” of Christians?

The political baggage Cameron has brought with him includes a foreign secretary who has been a member of Conservative Friends of Israel since his teenage years and a minister for Middle East affairs who’s a former officer of that same fan club.

His defence secretary Liam Fox, now departed in disgrace, was dubbed “a champion of Israel within the government”. He famously said: “In the battle for the values that we stand for, for democracy against theocracy, for democratic liberal values against repression – Israel’s enemies are our enemies…”

How can it be right for Ministers of the Crown to make such ludicrous commitments to a belligerent foreign power that continually defies international and humanitarian law and, I hear, shoots children for amusement – according to a horrifying article by surgeon David Halpin, ‘The methodical shooting of boys at work in Gaza by snipers of the Israeli Occupation Force’? http://www.globalresearch.ca/index.php?context=va&aid=22879

When Cameron became Conservative leader he proclaimed: “You need to know that if I become Prime Minister, Israel has a friend who will never turn his back on Israel.” And once in Downing Street he pledged: “In me, you have a Prime Minister whose belief in Israel is indestructible…I want to be clear, we will always support Israel…”

Supporting Israel means, of course, endorsing the regime’s lawlessness and criminal ambitions. Is that an option for a real Christian? And when will Mr Cameron have time to concentrate on Britain’s best interests in the Middle East, which is the job he was elected for?

Furthermore Britain, like all other countries that think themselves civilised, is under a solemn international obligation to make sure there’s no hiding place for the world’s vilest criminals. It’s a responsibility no Christian should shirk. However, when Tzipi Livni, who was responsible for mounting Operation Cast Lead and for the 1,400 deaths that followed, complained that a warrant had been issued for her arrest in London, Cameron and Hague immediately mangled our Universal Jurisdiction laws to create a safe haven for her and other Israelis wanted for crimes against humanity.

Having ensured that Madam Livni could safely go shopping in Bond Street, the devoted Mr Hague said: “The UK is committed to upholding international justice and all of our international obligations. Our core principle remains that those guilty of war crimes must be brought to justice.”

The Zionist cuckoo in Christianity’s nest

Cameron waxes lyrical about the King James Bible but acts as if he was brought up on the less admirable Scofield version, which has been the standard religious text on the other side of the Atlantic.

Cyrus Scofield, a convicted criminal and described by one American newspaper as “a shyster”, was commissioned to re-write the King James version by inserting Zionist-friendly notes. The idea was to change the Christian view of Zionism by creating and promoting a pro-Zionist sub-culture within Christianity. The Oxford University Press appointed Scofield as editor, and the Scofield Reference Bible has been a best-seller especially in the US for nearly 100 years.

It introduced a new worship icon, the modern State of Israel, which did not exist until 1948 but was already on the drawing board of the World Zionist movement.

American journalist Grace Halsell explained the re-hashed Biblical message: “Simply stated it is this: Every act taken by Israel is orchestrated by God, and should be condoned, supported, and even praised by the rest of us. Never mind what Israel does, say the Christian Zionists. God wants this to happen…

“Scofield said that Christ cannot return to earth until certain events occur: The Jews must return to Palestine, gain control of Jerusalem and rebuild a temple, and then we all must engage in the final, great battle called Armageddon. Estimates vary, but most students of Armageddon theology agree that as a result of these relatively recent interpretations of Biblical scripture, 10 to 40 million Americans believe Palestine is God’s chosen land for the Jews.”

Ultra-literal reading of certain Old Testament texts has persuaded Zionists to believe that Old Testament promises made to the ancient Jewish tribes are transferable to the largely unrelated people that comprise the modern state of Israel. They hope for, and are obviously working towards, the final battle they call Armageddon, in which Israel’s enemies (and God’s, of course) will be defeated. After that Jesus will return as the Jewish Messiah and King to reign in Jerusalem for a thousand years, and the Jewish people will enjoy privileged status in the world.

That is the Zionist dream of world domination in a nutshell.

We see how politicians become eager stooges, but if you are as puzzled as I am how a true Christian could possibly be taken in by Zionism, a short paper on the phenomenon is available from Sadaka Papers/PAPER-Christian_Zionism.pdf.

“We categorically reject Christian Zionist doctrines as a false teaching that corrupts the biblical message of love, justice and reconciliation.”