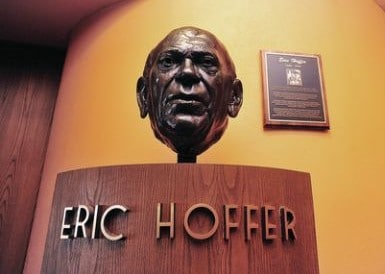 Eric Hoffer was the self educated longshoreman philosopher who came to fame with his first published book in 1951, The True Believer  on the psychology of mass movements.

The book was instantly deemed a classic by scholars and laymen for a term you don’t see anymore in book reviews ‘original ideas’.

The public as also captivated by how a self educated man like this, with no classes, teachers, examinations or diplomas…nothing but his local library, could produce a work like this.

Hoffer also had a love hate relationship afterwards with academia and intellectuals.

On the one hand they provided him forums based on the acceptance of his books, but on the other he excoriated them about about their scholarship on ‘the common man’, ie:

“How dare you write books about us, you know nothing about us, nothing!”

This was usually delivered while pounding the podium hard enough shake the building, and screaming at the audience. Hence, I began to see shades of our resident wordsmith, Gordon Duff in Eric Hoffer, their boomerang contempt that they share about elites over their contempt for common Americans as a more advance plantation animal that the usual kind.

Eric Hoffer quote material is all over the Internet. He was the master of the tight script, and his focus on ‘original thinking’ made him an enemy of book fluff.

There is a beautiful exchange in one of these clips below where Hoffer describes how a publisher was asking him if he could add more pages to a thin book manuscript he had submitted.

Hoffer wrote back that “the book had six chapters, each chapter had at least one original idea, and two good sentences…and that if he could read a 1000 page book that had six original ideas and twelve good sentences he would be ecstatic!”

I put this videos onto the end of one of Andrew Adler apology article this week, the Atlanta Jewish Times editor who suggested that the Mossad might consider killing Obama so Joe Biden could carry through the attack on Iran and save Israel.

Adler, of course had been sheep dipped in the Talmudism regarding ‘Goyim exist to serve Jews’, something all the Jewish orgs denouncing him for the bad publicity he got left out of his motivation.

Although Hoffer, a non practicing Jew, was pro Israel before he died, he had never seen any of the declassified Intel which showed the whole founding story of Israel to be a big fairy tale.

When I first discovered Hoffer some ten to twelve years ago and got my inexpensive used copy of The True Believer, I had looked for any audio or video on him so I could use it in a TV show as I assumed he had to have been quite a character in person. Nothing was to be found for sale, only of list of a few productions he had done.

But as I often try to do with hard to find material I checked back on YouTube and bingo…up popped three clips from an Eric Sevareid interview.

This was uploaded from an old VHS tape so the quality is not wonderful, but seeing the man it action was treat which I wanted to share with you all today.

The Hoover Institute has all of his archives, including a full ten part video series. My call there revealed that they do not make copies or digitize anything for Internet access or wider distribution due to copyright issues, but did give me contact numbers to forward a request.

My goal of course was to try to get a better quality digital copy and make Hoffer more accessible here.

But copyright holders that their own views about the diffusion of knowledge. If something has just been collecting dust they can have the attitude of ‘oh what the hell, let’s just put it out there.’ Or, they may want to hang on to is as part of their film library corporate assets.

Enjoy these three clips while we still have them.

You will see some of our own Gordon Duff in this Hoffer interview, the iconoclast, the defender of the common man from elite snobs.

Gordon never mentions all of his degrees…Electrical Engineering, two masters in history plus a Phd., all of his security clearances, or the fact that he is a Mensa with a photographic memory which comes in hand with his VT work.

They both devoured books. Gordon has 10,000 in his house, more than he has guns, which is saying something.

There are used Hoffer books galore on the Net, and do start with True Believer. It is in the ‘you must know this stuff’ category, especially if you are or have been sucked into a mass movement which you may have thought was of your own choosing.

For Gordon’s material, just click onto his archive page to browse his 2000 articles from the 20,000 VT has.

Like Gordon does here with our readers, trying to get them to start thinking a more like counter Intel people, Eric Hoffer was doing something similar with his breakthrough True Believer, helping people to ‘see it coming’ when a propaganda schmooze was being put on them. There is a lot of that going around today.

And another key thing they share is their love of America. You will see Hoffer just beaming when he gets into this.

One of the ‘original idea’ bombs that Hoffer is going to drop on you here is ‘The only new thing in history is America.’

You will also see Hoffer beaming when discussing the ‘diffusion of knowledge’ among the common man.

His story about the several truck loads of men who get dumped on the side of a mountain to begin a logging operation from scratch with no supervisors. is a gem.  Everyone, despite their all being strangers, just naturally knew what needed to be done and had a camp built in a day.

‘We could have built America’, says Hoffer, bursting with pride as you see him re-experience the pride he felt working with them

We are proud and grateful for Eric Hoffer, Gordon, our staff here, and our readers.

Our VT material can be a challenge because we don’t serve mild toast. And yes, we are trying to do something original here because at the end of the day that is all people are remembered for.

We will remember Eric Hoffer, the man who worked double shifts on the docks on weekends, 16 hour days at time and a half pay, just so he could read, study and write during the week. He forged himself into an original man. Maybe some of it can rub off on us.

These clips are about ten minute each and are all just fabulous. You get the Jim Dean guarantee on your time here.