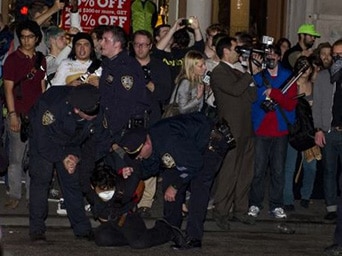 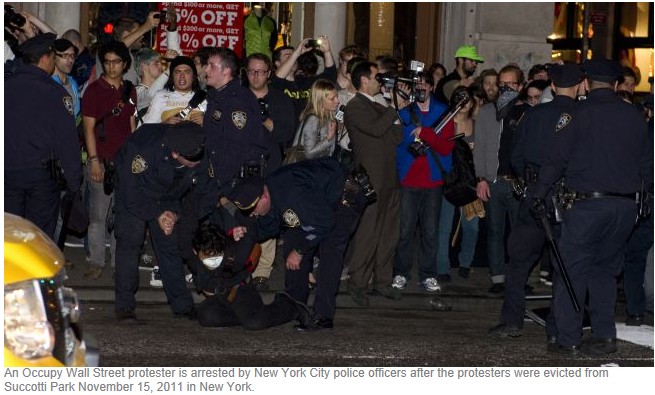 During the Bush administration, Israeli-American dual citizen and Director of Homeland Security Chertoff mandated that American police forces be trained by Israeli groups in crowd control, counter-terrorism and intelligence gathering.

Since that time, shootings of unarmed civilians has gone up 500%, attacks on legal political protests by police have become a scandal and huge stockpiles of ammunition and military heavy weaponry have been distributed to law enforcement groups in every region of America, both local and federally controlled.

Additionally, Army Chief of Staff General Odierno has offered the use of the US Army, an offer published in the Council on Foreign Relations journal, Foreign Affairs, to suppress political dissent by force, a violation of his oath of office and, quite literally, an act of conspiracy against the sovereignty of the US and State governments.

The current problem with law enforcement and the diminishment of legal rights of Americans is now at levels that cannot be ignored any longer.  It has become obvious to an ever increasing number of Americans that something is in the works, perhaps a political coup or a military take-over.

Years ago such things were done behind closed doors, now it seems it can be done in the open, just like shooting down presidents, killing senators in plane crashes or blowing up office buildings.

Instability in the United States is very real.  With Mitt Romney planning a new war while cutting taxes for the rich, one in four Americans is suffering from malnutrition and one in five children live with constant hunger in a nation that spends billions of dollars to subsidize and store excess food.

There is now a legitimate concern that armed law enforcement officers, numbering over 800,000, with constables and auxiliaries taking that number over 1 million, foreign led criminal organizations may systematically be gaining control of America in a form of “rot from within.”

It doesn’t take a genius to track down the money behind half of America’s politicians to their source, bank fraud, narcotics, gun running, medical scams and the oil monopoly.  This is the new organized crime.

What had once been police is how a “hodge-podge” thousands of agencies, each one falling like dominoes, unable to resist offers of advanced military weapons, offers of “informal discretionary funding” (bribes) and quickly degenerating into an army of occupation.

Key to this has been Israeli training, sending into America so-called experts who have long operated in an environment where killing civilians under cover of a rigged racist system of government has been official policy for over six decades.

Israel’s militarized police are trained to violate human rights on a daily basis.  116 UN resolutions have been filed and passed by majority vote by the General Assembly citing them with apartheid and genocide, exactly the description of America that Mitt Romney and his friends are offering America.

In my own town recently, a police officer shot and killed an Iraq War veteran while the man was asleep.  The officer had been called to the home because the family was concerned about their son who was having trouble adjusting.

They let the officer in the house, and rather than waking the sleeping veteran, the officer simply emptied his pistol into the man’s body.

Either we talk about little else or this seems to happen a lot.

In almost every case, the officers responsible for these killings are trained in the Israeli martial art of Krav Fit, contracts pushed by the Department of Homeland Security.

Israeli groups train in crowd control, use of military weapons and armoured vehicles against America’s “Occupy dissidents,” the poor, the homeless, mental patients and veterans, so far.

When the amount of ammunition is counted up and the military firepower estimated, the list may well expand to “anyone not willing to submit to live as human slaves.”

The death toll is never counted but is currently in the hundreds, perhaps thousands.  Police are never properly investigated, never called to account, just as with the IDF team that ended their standoff with 22 year old American waif, Rachel Corrie, who was crushed TWICE by a “free” Caterpillar bulldozer, a gift from the American people, donated to be used to crush the homes of Palestinians.

In this incident, Corrie was protecting 6 small children.  An Israeli court found the only way Corrie could be dealt with, by an entire platoon of IDF Commandos, was to drive over her with a bulldozer.  This was considered a legal use of force against an American citizen.

And Israel wonders why tens of millions of Americans suspect them for plotting 9/11?

This police incident was a classic.  The victim was living in a group home for the mentally ill.  He was in a wheelchair having lost an arm and leg some time before in a rail accident.

Two Israeli trained Houston Police were sent.  The spokesman for the Houston Police, Jodi Siva, claimed the man “cornered” one of the police officers and threatened him with an object.

Both officers had completed Krav Fit martial arts training from their Israeli instructors at a cost of thousands of dollars a day.

There is, within this tragedy an aspect of absurdity.  Other than guns and watching sports, martial arts is one of the biggest forms of recreation in the United States.  I began formal training at 8 and continued as a trainer or in competition well into my 50s.

Of course all US Marines have advanced martial arts training as with Army Rangers, Special Forces, SEALS, specialized units of the Air Force and about 4 million civilians who hold “black belt” or above level training.

There are two initial issues here, one, of course, is turning to what may officially be the least athletic nation on earth, Israel, for training in an area of athletic prowess, sort of a “coals to Newcastle” type of thing.

Israel is not Okinawa or Korea.  If I want violin or chess lessons, Israel will be among my first 100 choices.

The second, of course, is that the whole thing is a “con” in the first place, the only time a police officer in Houston was involved in a potential terror plot, he mistakenly killed a CIA agent.  This is quite an interesting story from May 2008:

Federal sources close to this case have told me CIA Agent Roland Carnaby had proof a “suitcase nuke” had arrived inside the U.S. from Israel on Tuesday. He was chasing the device and the Israelis who had it.

As local law enforcement was called-in, for some unknown reason cops allegedly began chasing the CIA Agent instead of the Israelis and ultimately shot the CIA Agent dead!

The Houston wheelchair shooting is a classic.  We have two armed police officers, highly trained in the mysterious martial arts of Israel, we have a subject in a wheel chair with one arm and one leg and in his hand is a ballpoint pen.

The officers, of course, had batons, tasers, and were wearing body armour.

A more likely scenario, one with a typical Israeli aspect to it, would have had the second officer simply take the handles of the wheel chair, run it out into the street and under a passing bus or perhaps a bulldozer of one could be arranged.

The victim had committed no crime, had no warrants but was suspected of “causing a disturbance.”  Group homes, such as this one, are seldom staffed with competent professional personnel and are generally a method of bilking government programs out of money while commonly physically and emotionally abusing residents.

Personnel working in “group homes” typically have, themselves, criminal records.  This is the average qualification in the United States for taking care of the old, the helpless and the infirm.

The officer who killed the unidentified man is named Matthew Jacob Marin.  He has been placed on a 3 day administrative leave.

This is his second killing in the past few years.

The officers were 8 feet from Johnson when he drew his weapon.  They then opened fire, hitting Johnson but also hitting 9 other people in the area, spraying bullets everywhere.

The incident began when Johnson shot and killed his Israeli employer who had recently ended his employment for reasons Johnson had found “unsatisfactory.”

New York police who cornered Johnson, who was armed with a Spanish made Star .380 7 shot pistol with 2 rounds remaining in the magazine, then opened fire, hitting Johnson then “accidentally” shooting 9 others, some as far “off line” as 120 degrees.

Was the Israeli training team brought in there from the Haifa School for the Blind?

Two days ago, an 83 year old crime victim, Delma Tower of Lynchburg, Virginia was killed by police for “failing to obey orders.”  The 83 year old was fleeing armed intruders who had broken into her home, she was barefoot, wearing a night dress and was not wearing either her glasses or hearing aid.

Police were unable to discern a half-naked 83 year old woman who was nearly blind from the two large male armed intruders, who of course escaped while the victim of the crime, while is so often the case, died in a hail of police gunfire.   Each month, the National Rifle Association prints a magazine read by millions of Americans.  This organization, one that works closely with police and is associated with the Romney campaign, lauds civilians who use their right to bear arms and reports carefully selected stories where civilians making use of their constitutional rights, but are not killed by police who mistake them for criminals.

I could list a hundred, a thousand such shootings.  Sometimes weapons are found at the scene, sometimes those killed have criminal records, and incidents like this have a long history.

What has changed today is that those killed are simply gunned down, no weapon mysteriously dropped by the police, victims are often aged, sometimes even financially well off, there seems to be an agenda that, more than anything else, resembles terrorism, the random killing of any American anywhere, anytime and under any circumstances by police who are unable to explain what they do.

Moreover, nobody ever seriously questions anything that police do.

It is almost as though a mass psychosis has taken over American law enforcement, every face a potential “bin Laden,” every minor confrontation solved only with volleys of gunfire.

The only common factor in so many of these incidents is the Israeli training, teaching American police to mimic Israeli treatment of the Palestinian people.  It seems American police have caught Israel’s national obsession of fearfulness and feigned victimization.