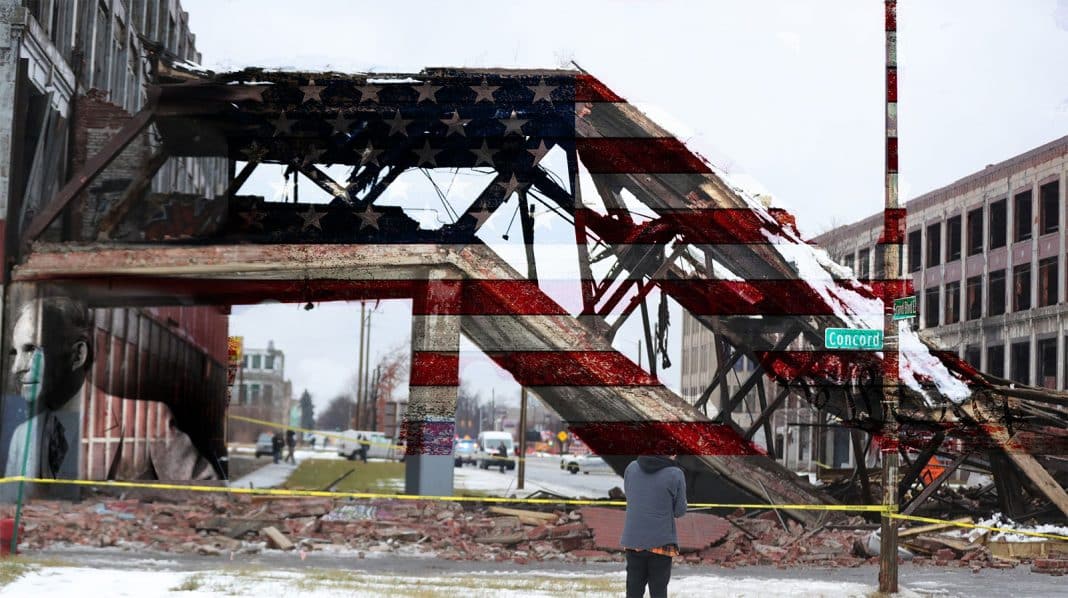 Press TV: Now it’s official: Detroit is bankrupt. And so is America.

This once-great nation is not just financially bankrupt, but morally and spiritually bankrupt as well. Detroit’s demise symbolizes the death of the American dream.

Detroit was home to the quintessentially American industry, automobile manufacturing. In the 20th century, the automobile brought Americans freedom and equality – or at least upward mobility.

It all started with Henry Ford, who figured out how to pay his assembly-line workers enough so that they too could buy the cars they were making. Before Ford, the industrial revolution was manned by underpaid, overworked slum-dwellers. After Ford, manual laborers entered the middle class.

Workers bought their own homes – in the suburbs, which they could reach thanks to the new mobility offered by the automobile.

Workers sent their children to college – often far away from home, which suddenly didn’t seem so far, thanks to the mobility offered by the automobile.

Detroit was the epicenter of the biggest social earthquake in history: The creation of an empowered, educated middle class that included the majority of the population, even manual laborers.

Ironically, the man behind that social earthquake, Henry Ford, has in recent decades been reviled in the mainstream media and academy as an anti-Semite. But according to evolutionary psychology professor Kevin McDonald, most of Ford’s claims about Jewish power in America were at least roughly accurate, though a few were exaggerated.

Henry Ford correctly claimed that global investment banking was largely run by a few outlandishly rich Jewish families. These plutocrats, he believed, were a threat to the general prosperity his new model of automobile factory had unleashed.

According to Ford, the big international banking families were draining the world’s resources through the exponential power of usury. And they were accumulating wealth and power far beyond that of any nation-state. Speaking of World War I, Ford wrote: “I know who caused the war: German-Jewish bankers.”

Whether or not the Rothschild international banking family and its allies caused World War I, they undeniably did dictate its outcome. The Rothschild family approached British leaders in 1917 with an offer they couldn’t refuse: Give us Palestine, and we will bring America into the war on your side and make sure you defeat Germany.

The British responded with the Balfour Declaration offering the Rothschilds a “Jewish national home” in Palestine. And the Rothschilds kept their part of the bargain. Using their domination of US media and finance, they demonized Germany and forced America into a war it had absolutely no business fighting.

More than 100,000 Americans, including 50,000 combat soldiers, gave their lives so that the Rothschilds could starve Germany and launch a genocide in Palestine.

Henry Ford understood what was really going on. He was horrified at the exponentially-increasing wealth and power of the international bankers.

If Henry Ford were alive today, he would be even more horrified.

The international bankers killed Detroit. How? By gutting America’s manufacturing. In the 1980s and 1990s, the international bankers decided to destroy America’s industrial might. So they forced neo-liberal “free trade” policies on the US. Those policies were designed to make the American industry uncompetitive and to move to manufacture overseas.

By the end of the 20th century, good jobs for ordinary American workers were already becoming a thing of the past. Working-class people in cities like Detroit were pauperized. Henry Ford’s social revolution ended, and the broad, inclusive American middle class began to die.
The working-class neighborhoods of Detroit were destroyed by mass unemployment just as surely as if they had been hit with nuclear bombs. People of color suffered the most.

And the poverty-bombers were Henry Ford’s old enemies: The international bankers, who were willing to sacrifice the lives of millions in pursuit of their “New World Order” global dictatorship.

In 2001, the American economy – or at least the working class and the industrial infrastructure – was suffering from the neo-liberal policies imposed by the international bankers through their bought-and-paid-for politicians. But America wasn’t yet dead. In fact, it wasn’t even running a significant deficit.

It took the false-flag attack of 9/11 to kill America.

9/11 was designed to create a phony “war on terror” that would destroy America’s soul, eviscerate its Constitution, and reduce Americans to permanent debt slavery.

All wars are created by the international bankers, who lend money to both sides and enlarge their already outsized fortunes through the power of exponential usury. That is the real purpose of war: To enslave populations to bankers.

But the post-9/11 “war on terror,” unlike all previous wars, was designed never to end. Its purpose is to create the New World Order described by David Rockefeller in his famous quote: “The supranational sovereignty of an intellectual elite and world bankers is surely preferable to the national auto-determination practiced in past centuries.”

After 9/11, the US spent trillions of dollars waging wars whose only conceivable purpose was to protect the Rothschild power base in Israel and to enslave the US under a tidal wave of debt.

The 9/11 wars destroyed the US economy. Before 9/11, there was essentially no deficit. Since 9/11, the US has sunk into bankruptcy. Today, the official US national debt is almost 17 trillion dollars. It is increasing at a rate of almost two-and-one-half billion dollars per day. Each man, woman, and child in America personally owes more than $50,000 to the Rothschilds and their international banking friends – and, what’s worse, they also owe exponentially-increasing interest on that debt.

As the US economy gets ground up, the industrial cities get destroyed first. The annihilation of Detroit, which is now more than one-third wasteland and officially bankrupt, is a portent of things to come for other American cities…and a symbol of the ongoing obliteration of the American dream.

Motown casinos were also caught in the city’s bankruptcy. Revenue from all three land-based casinos in Detroit – MGM Grand Detroit, MotorCity Casino, and Greektown Casino – has plummeted. Most gambling aficionados have turned to online casinos instead. To make a conscious choice, players can rely on reputable guides which list all online casinos on the market. Online gambling regulation in Michigan will be a reality at some point in 2021, giving online casino players a regulated market.