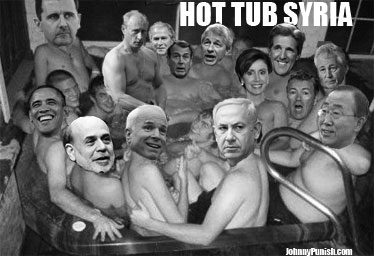 Over the last two days, we have watched a new reality show on TV featuring every clown in the closet. It was better than that ole Love Boat back in the 80s when every has-been-2-bit actor would show up to get 15 seconds of face time. Personally, I love the ATTACK SYRIA TV SHOW!

U.S. Secretary of State John Kerry was masterful as the protagonist. His performance Academy Award quality.

Designed for the U.S. public consumption, broadcasted worldwide, and brought to you by the NWO, the production was first rate. It even had the lovely “red hand” protestors who made today’s testimony by Kerry even more entertaining. Must See TV!

Clearly, the NWO is on!

The TV show program designed to move the polls from negative to neutral is working slowly as Americans get dragged into the fray begrudgingly gritting their teeth to raise that freedom flag like we are the only ones who can save the world even though they know it’s bullshit. But here we go!

Now, we’re not there yet so don’t get all hot and bothered!  The actors still have 1 or 2 more weeks to get the Sheeple off their isolationist couches and back to the field of battle.  So hold on to your remotes people cause this TV show has more episodes to come and who knows what will happen. I am thinking there might a cliffhanger JR Ewing style…like who shot Assad?

Now  even though the chemical weapons sales pitch does not pass the validity test, I don’t think they care do you? I mean the case sounds good. Who needs evidence when all we need is for the lead actors to say “We know….” and then just trust them right?

I mean we did NOT need evidence when they said they killed Osama Bin Laden right? And WMD’s in Iraq?

Screw the evidence, John Wayne Bush said they had them and Colin Powell’s cartoon was compelling!  Good enough!  Let’s Roll!

And who really gives a darn if Israel dropped chemical weapons (U.S. made White Phosphorus) on the people of Gaza in 2008. That does not count! That’s Israel! They are like J. Edgar Hoover, above the law! Occupation, Annexation, Humiliation, Torture, Nukes and Chemical Weapons…who cares? Israel has good hummous! Screw it Kerry!

Let’s go after Assad instead!

Look people, let’s get down to brass tax.

The dam U.S. funded rebels are getting their asses kicked. Bottom-line! The darn strategy is not working! They were supposed to topple Assad and that’s that! It did not happen. So what now?

Well, we need to escalate the dam thing. But how? Americans won’t put up with boots the ground. They are totally freaked out.

Hey, how’s bout an airstrike and a lil’ drone action to knock out their military bases.  Once knocked out, we can re-fund the rebels with more stuff and, with Assad’s military decapitated, the rebels can re-launch the coup d’etat plan?  Brilliant!

And then, to get the American public neutralized, we can again pull their heart strings and come up with something they would buy hook line and sinker! How’s bout chemical weapons? Yeah, we could get others to bring them in, use them on a few, and claim Assad is killing his people and boo-ya, we gots us an angle for a 21st century coup d’etat! Sound good to you?

Okay, so there you go….simply military strategy by Johnny Punish.

It’s right in front of us….we just have to accept it and stop trying to turn the NWO folks into guys with moral reason. Nothing here is moral on any side. It’s just might is right.  FYI, Assad is garbage too!  So let’s not make him a hero either!  He’s just got smaller guns, that’s all!

Anyway, the Central Banksters want control of the global money supply and the resources. The want Syria under their control. Right now, Assad is resisting. I mean, he had his chance. He was supposed to reform and when the Kerry’s met with the Assads for dinner back in 2009, it was all love and kisses. It was supposed to go well. But something changed.

The Russians were getting the contracts and that’s not cool. I mean, didn’t Assad get the Saddam memo? When the big fish is hungry you feed it or eats you. Duh!

BASHAR AL-ASSAD NORIEGA SADDAM GADDAFI
Anyways, I am thinking Assad will either Saddamed, Noriega-ed, or Gaddified; you know the rope, jail for life, or a bullet to the head. Because when you screw these guys, you get punk’d! And that’s the name of the global game!

ABOUT AUTHOR: Johnny Punish is a musician, artist, entertainer, businessman, investor, life coach, and syndicated columnist. Educated at University of Nevada Las Vegas, his articles appear in Veterans Today, Money News Now and his Johnny Punish Blog. His art music is promoted by Peapolz Media Records and played on net radio at Last.fm and more.