One More Nail in the Coffin 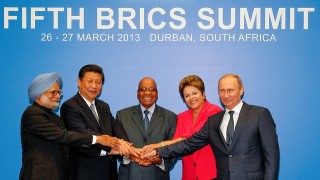 Today Brazil, Russia, India, China and South Africa struck another blow against the US petrodollar in Fortaleza Brazil. Leaders of the five emerging nations officially  agreed to form their own development bank to rival the World Bank and IMF. The bank will be centered in Shanghai, its first president will be Indian and it will begin with an initial capitalization of 100 billion dollars.

The five countries referred to as BRICS have long complained about the not-so-subtle economic warfare the US and Europe wage against developing nations via the World Bank and IMF.

As John Perkins eloquently describes in Confessions of an Economic Hitman, these US-dominated agencies operate a mafia-like protection scheme on the global south. Economic hitmen like Perkins pressure leaders of developing nations to accept development loans for massive infrastructure projects (dams, bridges, super highways, etc.) they neither want nor need. If they accept, their economies are paralyzed by crushing debt repayments. If they refuse, they risk assassination or being overthrown through US military intervention or a CIA coup. In nearly every case, the loans go to specific US corporations who build the dams, bridges and super highways.

In addition to crushing debt repayments, the IMF also impose their notorious “structural adjustment” programs on debtor nations. As a condition to renewing their loans, these countries are forced to open their economies further to US and European investors and enact a variety of austerity measure. These typically include privatization of state-owned utilities (by selling them to US and European corporations) and reduction of public spending by laying off state workers and cutting pensions and food and energy subsidies.

Still At It in Ukraine

This is exactly what we saw happen in Ukraine. Former Ukrainian president Viktor Yanukovich declined the IMF loan and structural adjustment program he was offered as a condition of EU membership. For obvious reasons, he preferred Russia’s offering – a loan without structural adjustment strings attached and a generous energy subsidy in the form of low prices for Russian natural gas. Sure enough he was overthrown by a fascist coup engineered conjointly by the CIA and Victoria Nuland (wife of Robert Kagan, cosignatory of the neocon Project for a New American Century), Assistant Secretary of State for European and Eurasian Affairs.

As a condition of the $17 billion IMF loan that followed the coup, the new puppet government has eliminated natural gas subsidies (resulting in a 50% increase in the price consumers pay).  They have also frozen pensions and wages, as well as agreeing to a further cut government spending by 2% of GDP per year.

As if this tyrannical bullying weren’t enough, China and other BRICS nations are also repeatedly rebuffed when they request equal representation in the World Bank/IMF leadership. Ever since their founding in 1945 in Bretton Woods New Hampshire, the US has been wrongheadly uncompromising that the president of the World Bank must be American and the president of the IMF from Western Europe.

So how, people might ask, does the BRICS decision to form a rival development bank hurt the US dollar? Aside from their iron-fisted manipulation of international development loans, the US also exerts also exerts tyrannical domination over world trade through their militant (i.e. backed by military aggression) insistence that crude oil be traded in US dollars to the exclusion of any other currency. Thoughtful economic pundits are quick to point out that George W. Bush’s military campaign to take out Saddam Hussein immediately followed the latter’s decision to trade Iraqi oil in Euros. The government of Iran made a similar move in 2007, which precipitated growing calls from both sides of Congress to bomb them back to the Stone Age.

Ever since Nixon removed the US dollar from the gold and silver standard in the 1970s, the US dollar has no intrinsic worth because it can’t be redeemed for precious metals. The US dollar, like all global currencies, is simply invented out of thin air by private banks as they issue new loans (see A Proposal to Strip Banks of Their Power to Issue Money).

The dollar only derives value from its role as the world’s reserve currency. Because the US military industrial complex demands that oil be traded in US “petrodollars,” any country wishing to purchase oil on the global market must hold dollars in reserve. Because of the continual demand for dollars this creates, the dollar maintains its value.

For more than a decade, Russia and China have been working to unseat the dollar as the world’s reserve currency by trading with each other, with Iran and various other central Asian and eastern European countries in currencies other than the US dollar.

The reason Obama is trying isolate China and Russia militarily has nothing to do with any military threat, which is nonexistent. It also has very little to do with competition over scarce oil and gas resources.

It’s all about the survival of the US petrodollar as the world’s reserve currency. As other countries begin trading in other currencies, they quit buying and stockpiling US dollars – and the value of the US dollar continues to decline. Which has major ramifications for an economy that’s totally dependent on importing food, energy and manufactured goods. What Obama and the political elite fear more than anything is the day the bottom drops out of the dollar and Americans need a wheelbarrow full of dollars to buy a pair of shoes manufactured in Hong Kong.

Obama and the political elite have good reason to fear the increasingly imminent collapse of the American dollar. When the dollar becomes worthless, it will take a whole wheelbarrow of money to buy a pair of shoes manufactured in Hong Kong.

Sadly the Obama administration continues to rely on misguided (and economically destructive) policy of trying to destabilize China’s and Russians  political and economic allies, fanning the flames of war in Ukraine, Syria, Iraq, Palestine, Yemen, Chechnya, Pakistan – the list goes on and on.

I find this especially discouraging given the wealth of practical solutions put forward by the likes Ellen Brown, Steven Keen, Michael Kumhauf, Paul Craig Roberts and other so-called “renegade” (i.e. non-Wall Street) economists and a few brave Congress people. Enactment of specific reforms that other countries are seriously examining could put the US economy (and dollar) back on track in a matter of months.

In my view, first and foremost would be to abolish the Federal Reserve and the ability of private banks to create debt-based money out of thin air (see A Proposal to Strip Banks of Their Power to Issue Money ). This would have the immediate result of eliminating the national deficit, as well as drastically cutting the national debt. Second and third on the list would be withdrawing from idiotic fair trade treaties like NAFTA and the TPPP,  which have decimated US manufacturing, and rebuilding US manufacturing capacity by subsidizing renewable energy production and technologies and public transportation instead of US oil companies. Number four would be instituting a 1% financial transaction tax (FTT) on all investment bank transactions (e.g. derivatives trading and other speculative activities). As of 2011, forty countries had enacted an FTT.

Thanks to the iron control corporate lobbyists exert over our “elected” leaders and the mainstream media, these options can’t even be mentioned in polite US society, much less seriously debated and enacted.

So long as stubborn corporate resistance to rational economic reform remains persists, the best we can expect is that the US economy will continue to deteriorate and the value of the dollar will continue its downward slide. The only uncertainty is how long the American people will continue to submit to ruthless oppression and exploitation by Wall Street corporations. Not long, in my view.

Below is James Corbett’s excellent documentary Century of Enslavement, which  explains in detail how private banks create money out of thin air when they issue loans. Contrary to popular belief the money supply isn’t issued or controlled by the federal government. The vast majority is issued by private banks, which gives them ultimate control of our money supply and economy.